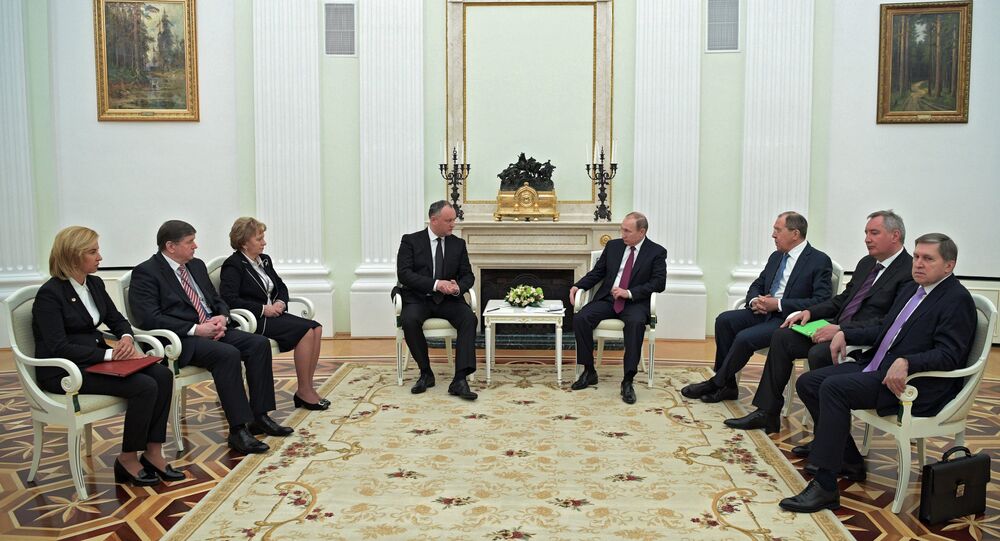 "Much will depend on how Moldova will build its relations with the European Union, I mean the agreement on association between Moldova and the EU, which has been signed and entered into force. For us, there are certain risks here, that are similar to the risks we faced after the signing of relevant documents between Ukraine and the EU," Putin said.

“The talks with the Moldovan president were held in a very constructive, I would say, friendly atmosphere, were substantial and motivated,” Putin said on the outcomes of a meeting with Dodon.

© Sputnik / Sergei Guneev
Putin Hopes Dodon's Visit to Moscow to Bolster Russian-Moldovan Ties
He added that the entire spectrum of bilateral relations was discussed during the meeting.

“We identified benchmarks for further development of the Russian-Moldovan cooperation. We also paid special attention to regional issues,” the president noted.

He also added that Chisinau would not erect an 'iron curtain' with the European Union but the country will not build relations with Europe based on anti-Russian rhetoric.

"We are not against the EU, we have common borders, but we cannot build relations based on anti-Russian rhetoric," Dodon said during his first official visit to Russia since inauguration in December, 2016.

Socialist Party leader Dodon secured 52.12 percent of votes in the second round of the presidential election in Moldova late in 2016, assuming office on December 23, 2016.  During his election campaign, Dodon stressed the need to improve Chisinau's relations with Moscow, especially in the economic sphere, and even suggested that once he becomes the president, Moldova would hold a referendum on whether the country should withdraw from the 2014 political and trade agreement with the European Union and instead join the Russia-led Eurasian Economic Union.