Poland's president signed the 2017 budget despite warnings from the country's main opposition force.

MOSCOW (Sputnik) — Polish President Andrzej Duda on Friday signed the controversial 2017 budget bill despite the country’s main opposition Civic Platform party’s leader Grzegorz Schetyna’s warnings earlier in the day that the president would face the State Tribunal in case of doing this.

"On January 13, 2017, President of Poland Andrzej Duda signed the bill on budget for 2017," the statement published on the president’s official website. 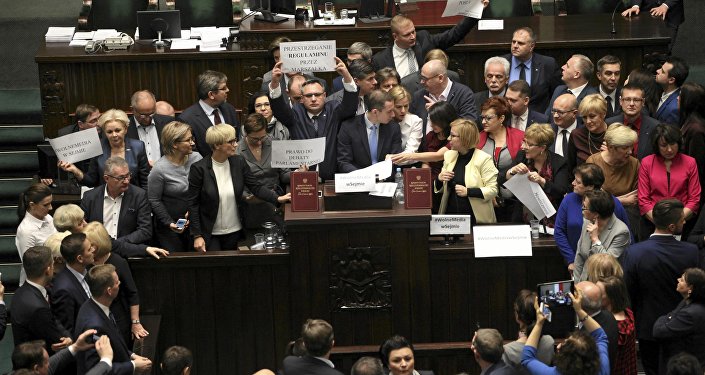 © REUTERS / Slawomir Kaminski/Agencja Gazeta
Polish Opposition Party Members Face 10 Years in Jail for Blocking Sejm Work
The Polish opposition has been boycotting the work of the Sejm since December 16, after the parliament announced its plans to restrict the work of journalists in the lower house. Despite the boycott, the Sejm had enough members on to meet the constitutional quorum and approved a number of bills, including the draft budget for 2017. The opposition considers the results of the vote illegitimate, and has demanded to hold a second meeting, while calling for the resignation of Sejm speaker Marek Kuchinski.

On Wednesday, the Senate voted to pass the bill, precluding a repeat vote on budget, despite a call by opposition deputy Sejm speaker Malgorzata Kidawa-Blonska to pause parliamentary proceedings to resolve the crisis.

Hundreds Rally in Support of Opposition Outside Polish Parliament in Warsaw