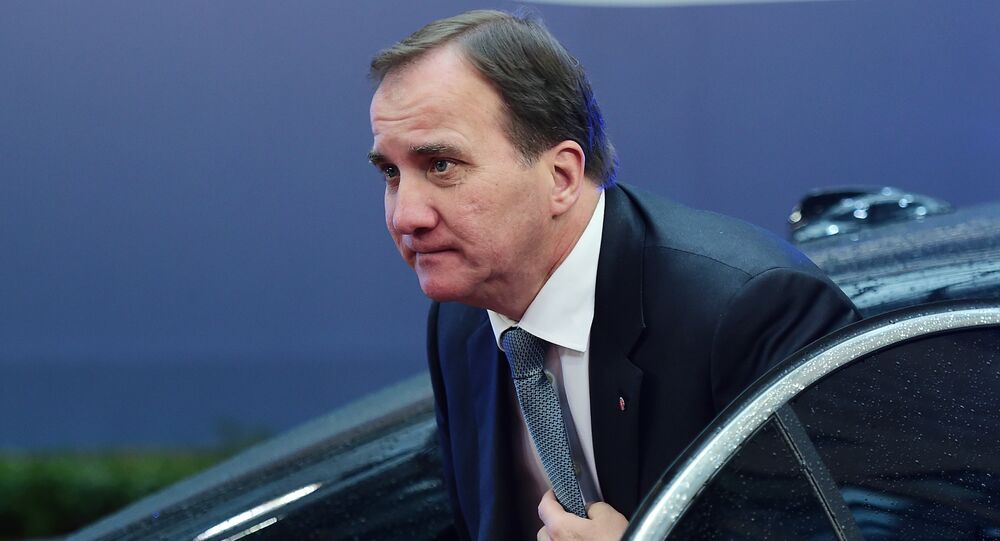 Earlier this week, Swedish Prime Minister Stefan Lofven said he was concerned Russia might try to influence elections in the Nordic country. Asked to comment, peace researcher Jan Oberg said that if Swedes are worried about Russian meddling, they should watch out for the US, which 'holds the world record' in foreign interference, getting involved.

© Flickr / Sunny Ripert
In US Footsteps: Sweden Claims Sputnik to Influence Elections, Presents Evidence-Free Report
Speaking to Swedish media on Sunday, Lofven pointed to the ongoing election hacking scandal in the US, and suggested that Moscow might try to 'interfere' in Swedish political institutions "as well."

The Prime Minister's comments followed a recently released report by the Swedish Institute of International Affairs, which claimed that Russia was using 'fake news' and 'propaganda' to influence public opinion and decision-making.

Speaking to Radio Sputnik, Jan Oberg, a peace studies researcher and the director of the Lund-based Transnational Foundation for Peace and Future Research, explained that Prime Minister Lofven left out something important.

"It's ok that he's saying that, in my view," Dr. Oberg noted. "The problem is that he doesn't say that he's also concerned about the possibility that others will influence the Swedish elections. I think the United States has the world record in interfering politically in other countries around the world. We have the NSA, we have them listening in to allies and friends, such as the private phone of Angela Merkel."

© Photo : Pixabay
Fake Threats Lead to Real Military Budget Hikes in Sweden
Sweden, Oberg noted, is still formally a nonaligned country – one that still considers itself neutral. Accordingly, he said, he was "surprised" that the Prime Minister apparently "thinks that there's only a 'threat' from Russia in terms of interference, in terms of information warfare. It's amazing that he doesn't say that in general, as a sovereign state, we should be careful about all attempts from all countries to interfere in our political processes."

"We should be guarding in all directions – north, south, east and west, if we are a sovereign state doing security – that's fine. But why do they exclude to mention that the largest listener, the largest hacker, the largest interventionist and the largest country in terms of regime change?" Oberg asked.

The peace researcher noted that in recent years, an odd wave of anti-Russian hysteria has flooded over Sweden, reaching Cold War levels, or perhaps even beyond. "I am surprised myself," Oberg noted. "I am old enough to remember the first Cold War – I grew up through it."

What's interesting, he noted, was that "at that time, the Warsaw Pact's military expenditures were about 75-80% of NATO's." Today, Russia spends just 8% of what NATO does, "having lost the Pact, so to speak…That is, [Russia] is ten times smaller a threat in terms of military expenditures. And yet the hysteria is going on like mad."

© AFP 2020 / John MacDougall
Far-Right Parties Poised for Victory in 2017 European Elections
The crisis in Ukraine is what sparked the hysteria, the academic said, but the events and East-West disagreements there quickly turned into a "pretext" "for NATO to go completely out of common sense and argue that Russia was this huge threat."

In Sweden, Oberg explained, the 'Russian threat' was blown up, firstly "because we are lacking an identity after not being a neutral country anymore – not having a disarmament policy like we had during Olof Palme's days," and secondly, "because there are circles in Sweden who want Sweden to join NATO, which some of us, and the majority of the Swedish people are still against."

"I think most of these stories that come out now – hacking, or whatever happens to be, is a pretext for what we do ourselves; to cover up for what we do ourselves and then go on doing it ten times worse," the researcher argued. "It's human nature too, but it's certainly [also] the military, industrial, media, academic complex – a tiny elite that is out of democratic control in most countries."

Accordingly, Oberg stressed that "it is absolutely necessary" for anyone seeking to do "good media work…to cover all sides in the conflict. I do not rely on Western media, and I do not rely on anybody's media if I see that the news is only based on one source…I'm not saying that that may be a lie; what I'm saying is that there are by all probability one, two, or five other angles."

© Flickr / Bruno Jargot
From Opponent to Supporter: Norway on Its Way to NATO Missile Defense
"I don't want media telling me what the truth is," Oberg noted. "It's not possible to tell what the truth is, unless you give people a chance to see all sources. The crime we're seeing today in the media is that people sell their own views as news; that is not news. News is at least an attempted effort to be objective."

For example, "anybody who says that Assad is a 'dictator', or that [Syrian authorities] are not a government, but a 'regime', is part of a propaganda machine. A journalist should call him the president; a journalist should call it the government. But they don't. They are already into the propaganda themselves." Unfortunately, that is a problem that "can be found in many countries," Oberg said.

Finally, "the other very important thing is: what is left out – what is not said," the researcher noted. "One of the most important things I teach my students in mass media is…look for what the story does not tell you." This is highly relevant in the case of Prime Minister Lofven's recent comments about the supposed danger posed by Russia, Oberg noted.