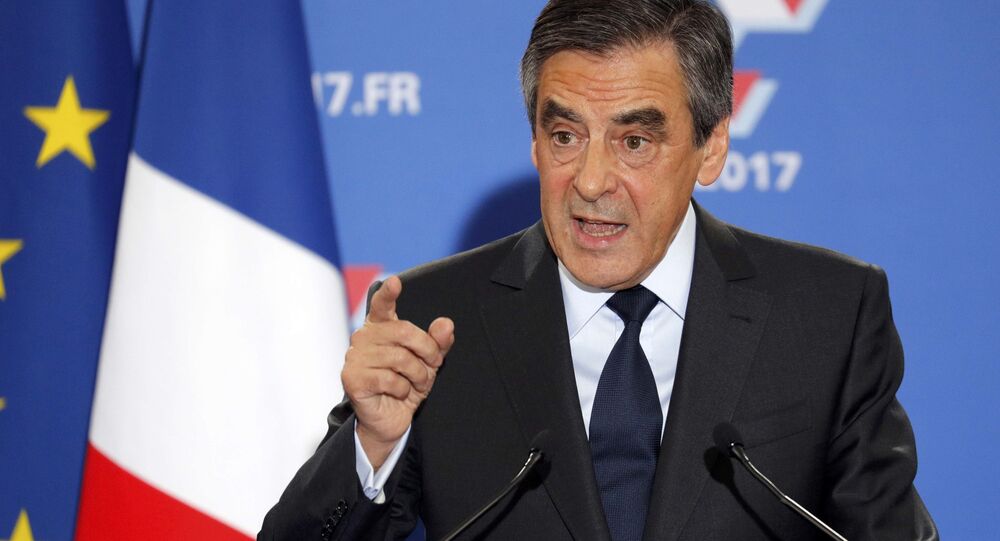 The leading candidate for the French presidency, the Republican Francois Fillon, has poured fuel onto the fire of Europe's migration crisis by suggesting that France should introduce a quota system for immigration, in a move which will be seen as backing British claims over Brexit.

The issue of immigration has become the central defining moment for the European Union, which is founded on the principle of the free movement of people. However, the migrant crisis — exacerbated by German Chancellor's "open doors" policy to refugees — has plunged the organization into chaos.

The mass movement of migrants across the Mediterranean and, via Turkey, through the West Balkans exposed deep flaws in the EU's Schengen borderless Europe policy — chiefly, that its external borders were totally unprotected.

© REUTERS / Dimitar Kyosemarliev
Migrants are seen in front of Bulgarian police after clashes inside a refugee center in the town of Harmanli, Bulgaria, November 25, 2016

The fact that so many people were able to move freely across Europe — coupled with the rise on terrorist attacks — has brought the issue of immigration to the fore. Fillon's suggestion that France could introduce quotas goes to the heart of the issue.

"France is now facing a new migration challenge. Our demography is one of the most dynamic in Europe so that, unlike most of our European neighbors, we do not need immigration to support our growth," Fillon says in his manifesto.

"At the same time, the economic and social crisis — unemployment rate of 10%, above the European Union average, record budget and social deficits, collapse of housing construction — is such that we do not have the Capacity to accommodate additional immigration.

"In 2007, the number of asylum applications registered in France was close to 30,000, of the order of 70,000 in 2014. However, if 80% of asylum seekers see their applications definitively rejected each year, only 5% Of those "rejected" actually leave France. The others remain clandestinely in France in the hope of regularization. This situation jeopardizes all our social facilities and in particular our accommodation facilities," Fillon adds.

Immigration was the key issue in the referendum in Britain over its membership of the EU, which resulted in the decision to leave the European Union — known as Brexit.

Former Prime Minister David Cameron attempted to negotiate an "emergency brake" on the movement of EU workers into Britain, but his argument was rejected by the majority of the UK public, who wanted stronger controls than those he brokered.

Fillon has also called for the EU to tighten its immigration policy, which has floundered over plans to relocate 160,000 refugees from Greece and Italy because of disagreements over mandatory relocation. The EU's deal with Turkey to return "irregular migrants" — those refused asylum in Greece — back to Turkey has also failed to deliver, amid claims that the EU is paying Greece to resolve its own inability to agree a common policy on refugees and immigration.

"The French, like all Europeans, are attached to their free movement in Europe. But who says free movement does not mean anarchy and danger to our security."

If Fillon wins the French presidency, his immigration policy will play a crucial role in Britain's negotiations over its future relationship- with the EU, which centers on London's bid to remain part of the European single market, while also retaining control over immigration.

French Presidential Candidate Fillon to Reach Second Round of Election