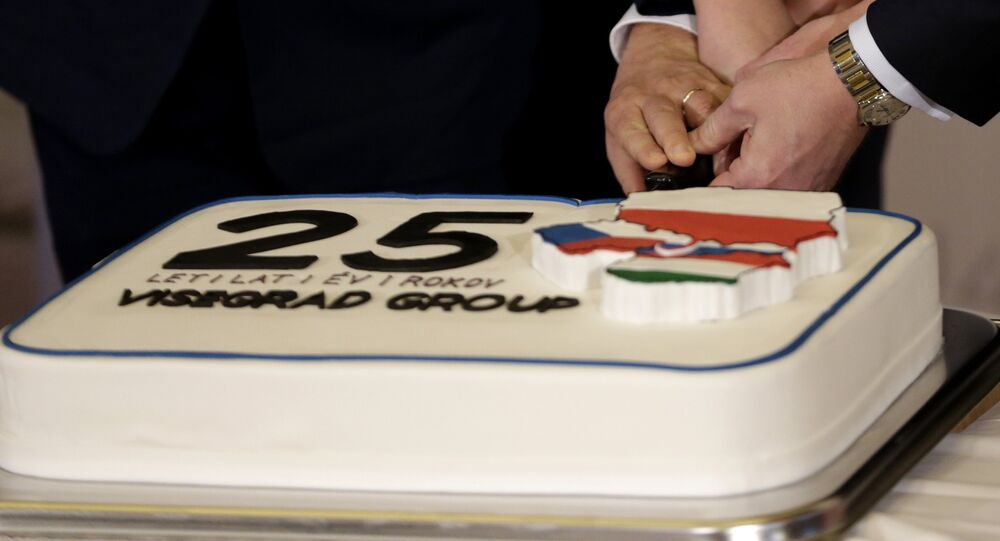 Earlier this month, Slovenian President Borut Pahor floated the idea of dividing the EU into regions, which stipulates that its member states be regrouped according to their interests and geostrategic "trends".

© AFP 2020 / GEORGES GOBET
EU's Survival 'Challenged' Due to Its Weakness, 'Threat of Disintegration'
The possible regionalization of the EU could see its member states being regrouped along the lines of their interests and geostrategic "trends," according to Slovenian President Borut Pahor.

He was echoed by former Slovenian Foreign Minister Dimitrij Rupel, who called for creating the so-called eastern mega-region which could include Croatia, Romania, Bulgaria, Serbia, Montenegro, Macedonia, Kosovo, Turkey and Ukraine.

Of the countries he listed, only Croatia, Romania and Bulgaria are currently EU members. None of these countries are in the Schengen area and only Montenegro uses the Euro, which it has adopted as a de facto currency.

Brexit means the Visegrad Group will be under pressure of German capital and German politics https://t.co/nu4UE2oDSC pic.twitter.com/NYcxYo0cPu

In this vein, it is worth mentioning supporters of another idea of "splitting" the EU, which envisages the establishment of four groups: an Atlantic group, a Baltic and North Sea group, a Danube-Black Sea group and a Mediterranean group.

In an interview with Sputnik, Slobodan Jankovic, a Belgrade-based political analyst, recalled that the plan to change the EU's format was, in fact, announced more than a month ago.

Ironic that most #brexiters imagine leaving #EU will result in a greater Britain. Reality is a likely disintegrationhttps://t.co/w5WjvlYCEO

"In this situation, Slovenia acts as a dummy which speaks on behavior of its ventriloquist," he said referring to Austria and Germany.

He described Slovenia's project as Eurocrats' attempts to save what "can still be saved" amid the "serious crisis" in the EU.

"The [EU's] economic crisis has lasted for more than ten years, in other words, it began even before the global crisis. Add to this the migration crisis, Brexit and political changes which prompt analyst to speculate on the future of the European project," Jankovic said.

Speaking to Sputnik, Aleksandra Joksimovic, Foreign Policy Center Director in Serbia, said in turn that in the wake of Brexit, everything depends on the outcome of this year's elections in Slovenia and key EU countries like Germany and France.

"Slovenia is a young European state which is trying to position itself as a constructive member of the EU which has certain ideas concerning the future of the bloc. The fact that Pahor called for the EU's regionalization indicates that it will become part of his election campaign,"Joksimovic said.

She added that the EU is functioning as a system of concentric circles; these are referred to as a potential model for the EU in the future. Slovenia, the northernmost former Yugoslav state, was once part of the Austro-Hungarian Empire, along with Austria, Hungary, Slovakia, Croatia, Bosnia-Herzegovina the Czech Republic and parts of Poland, Romania, Italy and Ukraine.

"There are already certain dividing lines in the EU. For example, Pahor mentions the Visegrad Group (Poland, Slovakia, Hungary and the Czech Republic) which emerged as a lobbying organization to help its members enter the EU as soon as possible. The group maintained cooperation within the EU in order to achieve concrete goals," she said.

© Photo : Pixabay
Euroscepticism Soars as EU 'Tanker' Makes Long, Slow Turn Towards Disintegration
She also suggested that this year will see more proposals to resolve the internal political crisis in the EU, but none of them will be approved until after the end of elections in France and Germany.

In addition, Joksimovic added, it is still unclear how the UK will withdraw from the EU, which is why it is necessary to wait until the end of this year, when she said the leading EU countries should decide on the bloc's future policy.