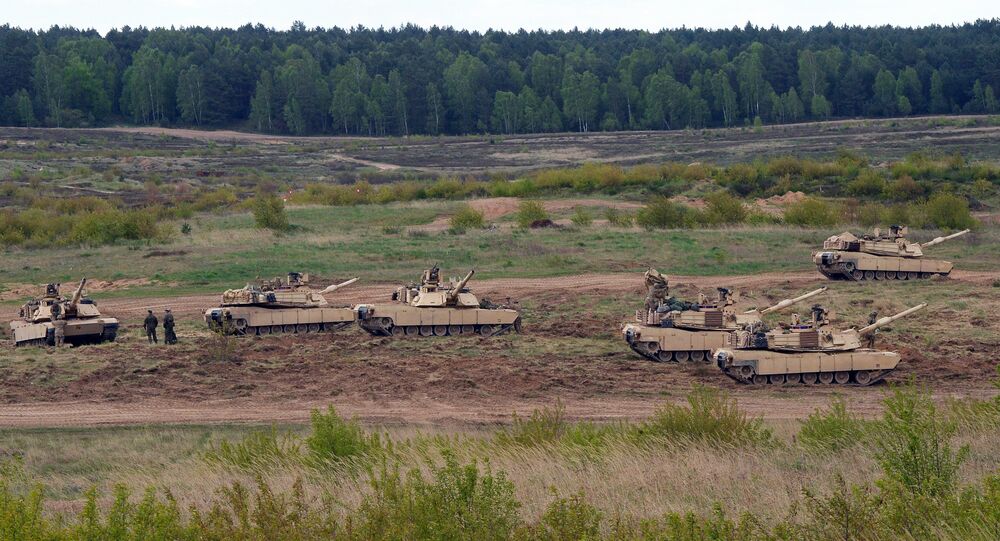 The greatest movement of armed forces across Europe since the Cold War started in 2017. US tanks recently arrived in the German port of Bremerhaven and are set to be relocated to Eastern Europe to participate in NATO maneuvers. German politicians and activists are anxious about the move and are planning to organize a protest campaign.

In an interview with Sputnik Germany, member of Germany's Die Linke Party explained what he thinks are the real reasons behind the upcoming maneuvers.

"First of all, this is about the justification of NATO's existence. Therefore, new threats are being invented and new scenarios — developed. Since the beginning of the Ukrainian crisis, Russia is once again represented as an enemy in Germany. After rather unsuccessful military operations abroad — in Afghanistan and Libya — NATO is searching for a new meaning to its existence," Neu said.

The US has used claims of alleged Russian military interference in Ukraine as a pretext for its military build-up in Eastern Europe, which Russia regards as a security threat.

© AFP 2020 / CHRISTOF STACHE
Germany: EU Must Match NATO Build-Up to Combat Russian Threat
The American military equipment that arrived in Bremerhaven will be transported to Poland by rail, from where it will be distributed across the Baltic States, Bulgaria and Romania as a part of NATO's mission to contain alleged "Russian aggression."

A similar opinion was expressed by a representative of the Bremen Peace Forum, Eckhardt Lenz. Together with other activists, he is planning to organize a protest campaign against the presence of US armed forces in Germany.

"We can't just watch and say nothing — we must show an alternative in the form of a peaceful movement. So we called the residents of Bremerhaven to take part in a rally," Lenz told Sputnik.

According to the activist, it is extremely important to show that anti-Russian militarization does not find support among Germans. In his view, NATO's "saber rattling" could have unpredictable consequences and increase the danger of war.