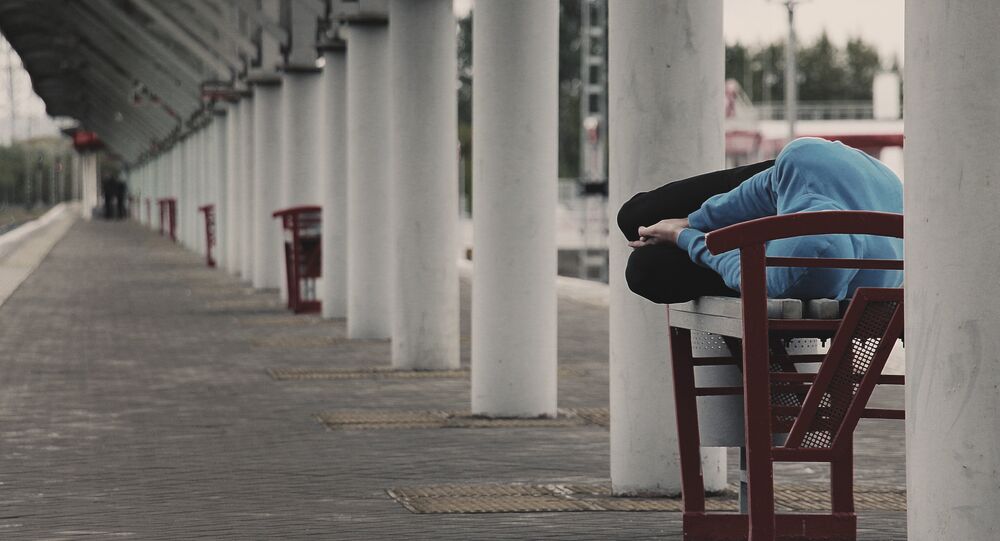 The Nordic countries are renowned across the globe for their welfare systems. Oddly enough, homelessness is growing in metropolitan areas across Scandinavia, partly as an aftershock of the migrant crisis.

© AFP 2020 / BERTIL ERICSON
Body Searches and 24/7 Surveillance to Uncover Migrants' True Identity in Sweden
In recent years, Denmark has seen a marked increase in homelessness, the spike being most obvious among people under 30.

"We have seen a sharp increase in the number of young homeless people since 2009. Many of them have mental problems or come from socially vulnerable strata, but also have many other backgrounds," Lars Benjaminsen, a researcher at The Danish National Centre for Social Research (SFI) who masterminded the recent survey on homelessness in Denmark told Danish newspaper Avisen.

In total, the number of homeless persons increased by 23 percent from 4,998 in 2009 to 6,138 in 2015, when the last census from SFI was made. During the same period, the number of young homeless people increased by 56 percent. Looking at the 18-24 age bracket, the figure almost doubled. According to SFI, a marked increase has occurred during the recent four months in primarily metropolitan areas of Copenhagen and Aarhus.

Lars Benjaminsen from SFI pointed out a mixture of individual social problems and structural problems in society as the cause of the spike in homelessness whereas Preben Brandt, the chairman of the Project Outside with experience stretching over almost four decades, argued that the image of homelessness has changed a lot in recent years.

"When I started, it was predominantly older alcoholics who were homeless. Today, we encounter more young people," Preben Brandt said, blaming cuts in social services.

© CC BY-SA 2.0 / Teza Harinaivo Ramiandrisoa / Pregnant woman
Expectant Mothers Sent From Sweden Amid Migrant-Propelled Baby Boom
Meanwhile, the same trend has become manifest in Sweden. In Malmö, which is the nation's most "multicultural" city and a popular destination among asylum seekers, the increase in the number of the homeless is largely fueled by the "new arrivals." According to Malmö Municipality, the number of the homeless increased by 30 percent in 2016 compared to the year before.

"You could say that homelessness has changed a lot in the last five-six years," development secretary Lars Larsson told Swedish Radio.

In the 2016 survey, the majority of the homeless had foreign citizenship — for the first time in Sweden's history.

© AFP 2020 / JONATHAN NACKSTRAND
Multicultural Cops Take to the Mean Streets of Sweden
In 2016, the city of Malmö booked approximately 350,000 overnight stays at hotels for its homeless. This is a substantial increase over last year's already high figure of 210,000 overnight stays, which landed the total 2016 bill for homelessness at 386 million SEK ($42.5mln).

Mathias Bred, columnist at Swedish Daily Göteborgs-Posten, argued that homelessness is part of the new society, which proves that the Swedish welfare state is not working as in textbooks.