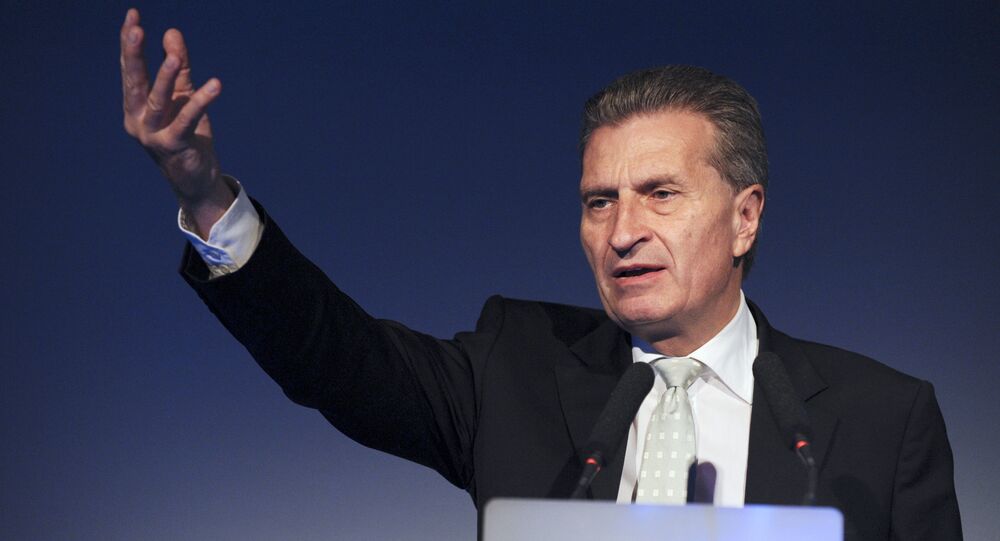 In an open letter to the European Parliament, ten campaign groups have urged MEPs to reject Gunther Oettinger's promotion to the European Commission's Human Resources dossier due to his record of politically incorrect statements – and a signatory has told Sputnik that his appointment raises further questions about the ethics of the Commission.

© AFP 2020 / ERIC PIERMONT
EU Commissioner Oettinger Apologizes for Describing the Chinese as 'Slit-Eyes'
The letter, which is signed by the European Network Against Racism (ENAR), Oxfam and Transparency International, states Oettinger is unsuitable for the role due to the racist, sexist and homophobic remarks he has previously made.

In October 2016, he made a speech at a meeting of business leaders in Hamburg where he referred to the Chinese as "slit-eyes" and "sly dogs," and suggested Germany was becoming so liberal the country would soon adopt a policy of "obligatory" gay marriage.

He subsequently apologized for his remarks, stating they were "not as respectful as [they] should have been."

​"It's now more vital than ever that the Commission is strongly committed to countering discrimination and ensuring equality for all. The Commissioner in charge of human resources must lead by example — they need to be prepared to speak out against all racism, sexism, xenophobia, homophobia and transphobia in the European Union. Commissioner Oettinger is obviously not the right person for this task, and it's very strange he was put forward for the role," a spokesperson for ENAR told Sputnik.

Oettinger was until January 1, the Digital Services Commissioner. He was selected in October by Commission Chief Jean-Claude Juncker to take on Human Resources from Bulgaria's Kristalina Georgieva, after she left for the World Bank.

The Commission says it still has full confidence in Gunther #Oettinger.

​Juncker condemned the remarks, saying they were indecent for a member of the EU's executive body. Nonetheless, Oettinger's appointment went ahead as planned, despite demands from MEPs that his move be approved by Parliament.

Despite #OettiGate:#Oettinger to face "exchange of views" but no #EPhearing+vote.

​In his new role, Oettinger will also be charged with supervising the EU budget, which is another area of concern for the letter's signatories. In May 2016, Oettinger met with unregistered German lobbyist Klaus Mangold on a private jet to Budapest, which he failed to publicly disclose.

We know who #Oettinger has been meeting in the air, but who's he been meeting on the ground? Find out: https://t.co/nH9AAeGf3C #oettingair pic.twitter.com/2E0cm2kCFs

​A spokesperson for Transparency International said Oettinger's appointment highlighted the severe transparency and ethics shortcomings at the core of the Commission:

"There are serious question marks over Oettinger's with lobbyists. Almost 90% of his meetings as Commissioner have been with corporate interest groups, the highest percentage of any Commissioner. Moreover, he refuses to disclose the nature of his meeting with Klaus Mangold, so it isn't whether he broke EU ethics rules in doing so. He's clearly unfit to ensure compliance with existing ethics and transparency rules in the Commission."

Nine MEPs have also written to Juncker, asking him to reconsider the promotion.

​The MEPs said his recent actions were not appropriate behaviour for a Commissioner, and breached the Commissioner Code of Conduct for commissioners.

"The appointment would send the wrong message to European citizens who expect holders of high authority to lead by example, and respect principles of democracy, transparency, diversity, and inclusion."

Some of the group serve on committees that oversee his dossier.