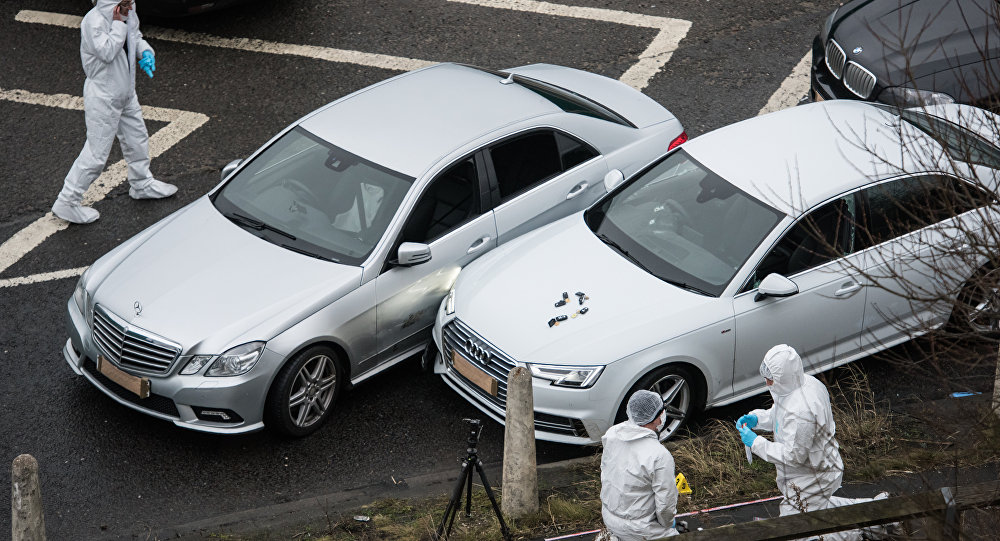 Video footage has emerged of a group of men attacking a police car in the north of England, following the fatal shooting of a 28-year-old man by an armed officer.

Yassar Yaqub was shot three times through the windscreen of his car by police marksmen as he drove down the M62 motorway near Huddersfield in Yorkshire.

police shoot Yassar yaqub might be for no reason
but statement by police killed in operation they think he had a pistol @htafcdotcom pic.twitter.com/APPdaYjr3X

​West Yorkshire Police say they found an illegal gun in his car.

Yaqub's father, a local property developer, described his son as "brilliant" and denied he was a criminal, suggesting that the police executed his son.

"If it were a fight you could understand it but [it was] just bang, finished — that's what's killing me," Mr. Yaqub is reported to have said.

A candlelit vigil was later held on the motorway section where Yaqub was gunned down. Meanwhile, more than a hundred people gathered chanting anti-police slogans and making accusations of murder.

Vigil in memory of Yassar Yaqub at Ainley Top, #Huddersfield where he was shot dead in police incident on Monday night #M62 pic.twitter.com/HjBJg6m5ih

​Video footage shows a group of men kicking a police car and verbally abusing riot officers who had been drafted in by the force.

​Bradford MP Naz Shah posted a message on Facebook appealing for calm after the protest after being briefed by West Yorkshire Police about two more disturbances in the area.

"I recognize that tensions are running high within communities. The local police also understand the heightened tension that the events over the past 24 hours have caused within our communities and the need to provide reassurance."

Sixteen years ago, race riots erupted in Bradford on 7 July 2001 between the city's British Asian community and members of extreme right ring groups such as the British National Party and National Front. 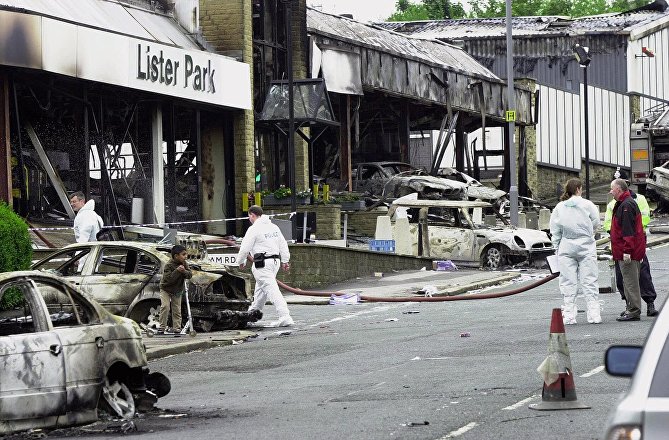 © AP Photo /
A young south Asian boy plays amidst burnt out cars outside a BMW dealership in the Manningham area of Bradford, northern England, Sunday July 8, 2001 after riots broke out Saturday at an Anti-Nazi League demonstration against the far right anti-immigrant National Front.

Youths rioted for two consecutive nights, attacking police and Asian-owned businesses which led to the deployment of around 1,000 riot police officers and US$10 million of damages.

​However, 16 years on from the race riots and Bradford still remains one of the UK's least integrated areas.

A report into the causes of the riot published ten years later by Professor Ted Cantle, an expert in community cohesion, said Bradford remained "one of the most deeply segregated in the country."

"One of the effects of a very divisive and muddled referendum's is that some sections of the community feel that anything goes when it comes to mutual abuse," Councillor Geoff Reid, Lord Mayor of Bradford told Sputnik, "and some of the language has been ghastly."

"What I witnessed on my ward of Eccleshill on the night of the referendum was quite chilling," he said. "People who had never voted — and would never vote again — were determined to get their own way and their language and facial expressions were chilling."

And Bradford's Mayor still remains concerned about legacy the referendum will have on his city.

"The atmosphere generated by the referendum is going to hang about — and it's not good for a place like Bradford which has worked hard to bring lots of people from different backgrounds together."

Councillor Geoff Reid, now Bradford's Mayor, remembers better than many people what it was like in Bradford 16 years ago.

"On the night of the riots, I spent most of the night in a bus shelter in the thick of it and on the front line.

"There was a mixture of people in there, black, white, Asian, and someone said, 'these lads are destroying their own jobs. And then a few days later, someone from the Asian business community boldly said, 'this must not happen again — and this will not happen again.'

"And it hasn't — we haven't gone back there despite a few attempts by far right groups to stir tensions up in the city — but we've invested a lot of money into the community to make sure they won't get anywhere," he told Sputnik.

"We've a lot to cherish we don't want to put at risk."

A spokesperson for West Yorkshire Police said: "Police empathize with the heightened tensions and engaged with protesters to appeal for calm.

"They are continuing working with members of the community, partners and local officers to maintain community cohesion and police relations."