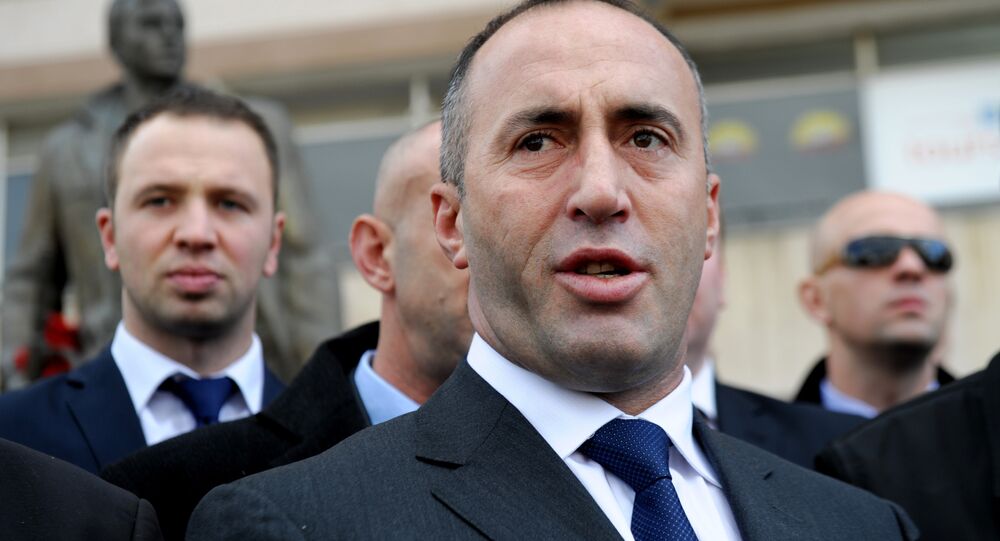 Ramush Haradinaj, Prime Minister of Kosovo between December 2004 and March 2005, has been arrested in France in response to an international arrest warrant for war crimes filed by Serbia.

Haradinaj, 48, current leader of the Alliance for the Future of Kosovo (AAK) party, led the Black Eagles unit of the Kosovo Liberation Army during the Kosovo war, which saw the predominantly ethnic Albanian province of Serbia gain independence with NATO assistance. Kosovo's independence is nonetheless not recognized by Belgrade.

© AP Photo / Visar Kryeziu
Member of the opposition Ramush Haradinaj addresses Kosovo lawmakers during a debate passing constitutional amendments that would allow the establishment of a special court to prosecute its top leaders and former guerrilla fighters for war crimes in capital Pristina on Monday, Aug. 3, 2015.

He was arrested on arrival from Kosovo capital Pristina at Basel airport, located near the Swiss and German border, en route to Donald Trump's January 20 inauguration.

​As noted on Twitter by Shpend Ahmeti, the Mayor of Kosovo's capital Prishtina, the former Prime Minister has twice been tried on war crimes charges at the International Criminal Tribunal for the former Yugoslavia in The Hague.

Twice accussed in the Hague but never convicted, Kosovo opposition rep. Haradinaj arrested in France with a 2004 Serbia warrant. 1/2 #kosovo

​The court considered Haradinaj's involvement in three cases, in which he is alleged to have killed at least 60 people. He resigned his premiership in 2005 to face the first trial, and was acquitted of 37 charges in 2008. He was again acquitted at a partial retrial in 2012.

Despite the acquittals, Serbia has continued to push for a fresh trial, issuing a new international arrest warrant in 2015. He was briefly detained on a visit to Slovenia as a result, in June that year.

Serbia charges state that the Black Eagles tortured and killed dozens of Serbian civilians, whose bodies were found near Radonjic lake in the Decani region. Haradinaj was a former comrade-in-arms of Kosovo's current president, Hashim Thaci, but is now a political adversary, notable for opposing any attempt to normalize relations between Pristina and Belgrade.

He was named in a 2005 analysis of organized crime in Kosovo produced by German intelligence agency BND, which stated he along with key regional political players Xhavit Haliti and Hashim Thaci were intimately involved in criminal activities.

Other leading Kosovan politicians have also been implicated in war crimes during the 1998 — 1999 conflict. Hashim Thaci (Thaqi), former Prime Minister and present Deputy Prime Minister and Foreign Minister of the Republic of Kosovo, and dubbed by US Vice President Joseph Biden as the "George Washington of his country," was involved in kidnapping, forced displacement and murder, according to a 2010 Council of Europe inquiry report.

The report also highlighted Kosovo's key role in the international black market trade in human organs, which began with the trafficking of human organs taken forcibly from living Serb prisoners by commanders of the KLA.

In 1999, over 300 Serbs and other non-Albanians were kidnapped and taken to northern Albania, where their organs were removed and sold to hospitals across Europe for a profit.

Russian politicians and diplomats have called for an official inquiry into the matter, with Russian UN Envoy Vitaly Churkin questioning the validity of a Kosovo-led 'special court' charged with investigating in May 2015.

He stated that Kosovo "clearly" could not "objectively evaluate" such a "delicate" matter.

Yugoslavia 25 Years On: A Country Destroyed