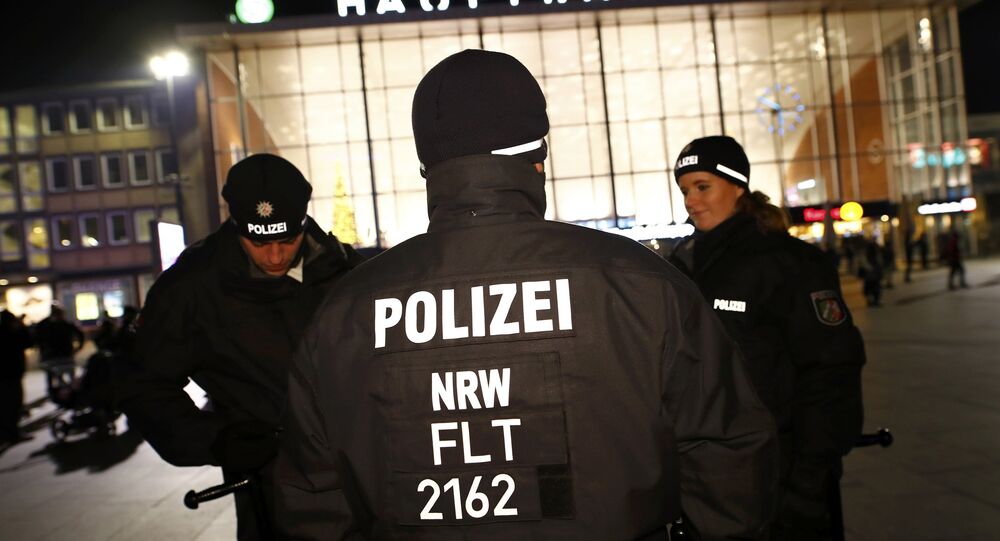 Cologne's police force is facing accusations of racism after screening hundreds of men who appeared to be of North African descent who arrived at the city's main train station on New Year's Eve. However, many have praised the operation for preventing a repeat of last year's crime wave.

© AP Photo / Hermann J. Knippertz
German Police Screen Hundreds of N Africans in Cologne During New Year Celebration
The German police force in Cologne was accused of racism after it singled out hundreds of men who appeared to be of North African descent for additional security checks during Saturday's New Year's Eve celebrations.

That evening, the state police of North Rhine-Westphalia tweeted that hundreds of “nafris” (North Africans) had been screened at the main railway station of Cologne, the state's largest city, where hundreds of women had reported a wave of sexual assaults and robberies during last year's celebrations.

Civil liberties activists and several politicians were quick to criticise the police for engaging in racial profiling in its efforts to prevent a repeat of last year's crime wave.

“It is clear that the police acted quickly and prudently to prevent pre-arranged groups from carrying out renewed outbreaks of violence,” Peter wrote on her Facebook page, but renewed criticism of the police use of the term “Nafri.”

“The police haven't done anything apart from describe reality with their profile of Nafri/North Africans,” Gabriel said.

Deputy Chairman of Angela Merkel's CDU party in the German Bundestag Stephan Harbarth said that the police had taken the necessary precautions to prevent a repeat of last year's attacks, and called on Bundestag deputies to pass legislation in the coming months to declare the Maghreb countries safe countries of origin.

“Would the Greens prefer that the police leave these groups and instead control grandparents traveling with their grandchildren? This contradicts every life experience,” Harbarth told the Rheinische Post.

“99% of the perpetrators in Cologne were Nafri. When the police strictly controls these groups during New Year's Eve 2016 it's racism? Get real,“ this Twitter user wrote.​

On Monday, Cologne's Police Chief Jurgen Mathies rejected accusations of racism and told journalists that if the police hadn't acted, it is likely there would have been a repeat of last year's crime wave.

“We looked very carefully at the way people were behaving that day, before the controls were carried out,” Mathies said, as reported by Sputnik Deutschland.

“I was at the train station myself, and I can say that if we hadn't been so strict, similar events to what happened in 2016 would have been quite realistic.”

Mathies added that the police remain concerned by the arrival of hundreds of young men from North Africa at Cologne railway station on the evening of December 31, and had been monitoring the social networks in an effort to prepare for the movement of people that night.

“At the moment, however, we still don't have the intelligence to explain this phenomenon,” Mathies said.

© REUTERS / Wolfgang Rattay
'Beyond Description': Leaked Police Report Reveals Horrific Details of Cologne Sex Attacks
Federal police inspected trains arriving in large cities, and in some cases prevented groups of young men aged between 18 and 35 from arriving at their destination. In Cologne 1,700 state police officers were on duty to ensure security.

“We wanted to prevent a situation like 2015,” the spokesman said.

On New Year's Eve 2015, more than 1,000 young men of North African and Arab appearance gathered in smaller gangs around the main train station in Cologne and carried out a wave of sex attacks and robberies, directed against women. According to the Cologne prosecutor's office, more than 1,200 people were victims of crime during the event in the city last year, including 648 victims of sexual assault.

In October it was reported that 22 defendants are facing trial for their part in the crimes: ten Algerians, nine Moroccans, one Iraqi, one Libyan and one Tunisian. So far just six perpetrators have been convicted. One received a 480 euro ($498) fine and the others received prison sentences, mostly suspended, ranging between six months and one year and nine months, Die Welt reported.

Similar outbreaks of criminality were recorded last New Year's Eve in other German cities, including Hamburg and Bielefeld, and police there also took extra measures to ensure safety this year. According to Germany's Federal Criminal Office, 1,200 women across Germany were sexually assaulted during public celebrations at New Year's Eve last year, and at least 2,000 men were involved in the assaults.

Germany Received More Asylum Applications Than Other EU States in 2016