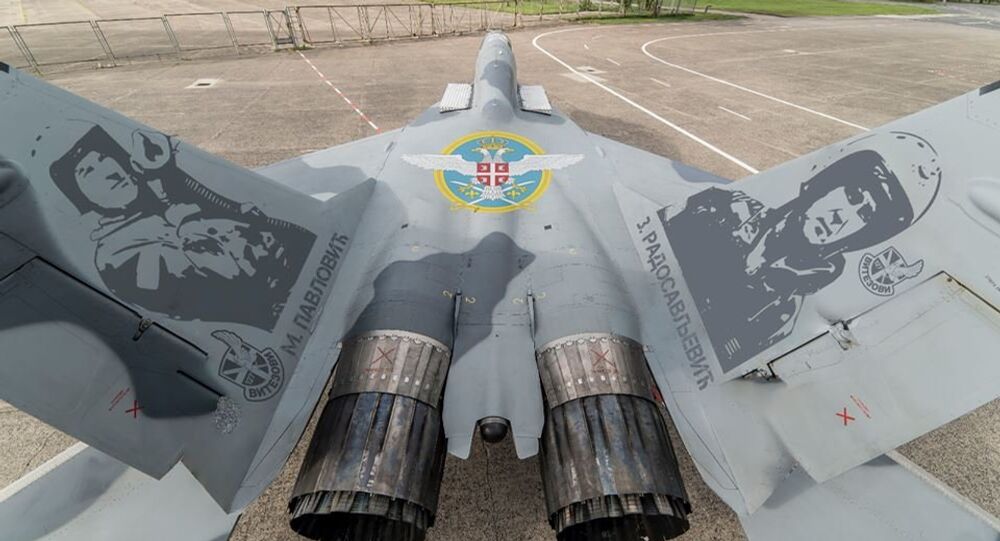 "Russia donated six MiG-29 fighter jets, the first modernization stages of which would only cost us between 180 million euros [$187 million] and 230 million euros … That is incomparable with what we had before. We also received 30 T-72С tanks and 30 BRDM-2 [armored vehicles] as a gift," Vucic said in a statement.

Meanwhile, members of Serbian Students for Truth (SfT) movement asked the defense ministry to have the names of Serbian nationals killed by the 1999 NATO bombings of Yugoslavia painted on the Russian MiGs.

In an interview with Sputnik Serbia, SfT representative Ivan Ristic, said that the idea to “personalize” the planes was a good chance to bring back memories of Serbia’s fallen heroes.

“This is the first time that we are getting fighter planes since 1987. After all necessary repairs, we will have our own fleet of fourth generation Russian fighters to protect our airspace and, if necessary, to defend Serbia and also the Bosnian Serb Republic against any aggression.”

He added that now that Croatia has received a number of combat helicopters from the US, it was clear that it might want to use them against Bosnia and Serbia, which are the only two former Yugoslav republics still not in NATO.

“That’s why the Russian planes give us a chance to shift the strategic balance of forces in the region in our favor,” Ivan Ristic emphasized.

There were three Serbian Air Force Pilots and an estimated 270 Yugoslav Army personnel and police killed during 1999 NATO bombings of Federal Yugoslavia.

Air Force pilot Milenko Pavlovic died on May 1999 in a dogfight with an entire squadron of NATO warplanes.

Zoran Radosavljevic was killed on March26, just a day after his colleague, Zivota Djuric, was shot down following an air raid on arms depots used by Kosovo Liberation Army terrorists. To avoid being taken  prisoner, Zivota Djuric drove his damaged plane straight into the enemy positions.

Ivan Ristic said that the names of all Serbian pilots who fell defending their country before and during the 1999 NATO attack will appear on the Russian MiGs.

“One such hero, Milos Zunic, died defending Belgrade against the Axis countries during the so-called April War of 1941,” Ivan Ristic said.

In an interview with Life News, the movement’s founding member Neven Djenadija spoke about the significance of Russia’s decision to hand the fighter jets over to Belgrade.

“There is a certain symbolism in all this because the first warplane in the Serbian army was made in Russia, bought with money raised by the Serbian Orthodox Church and readers of the Petrograd newspaper Novoye Vremya (The New Times),” Djenadija said.

He added that the idea to have the names of the heroic Serbian pilots, who died defending their country in 1999, emblazoned on the Russian warplanes came to him the moment he saw the Russian MiGs coming in.

“The main reason why our pilots were killed was because their planes were not fit to fly. This is very sad episode, but a good lesson too, which taught us how best to defend our country,” he noted.

MiGs for Manila: What Happens if Moscow Starts Supplying Philippines With Arms