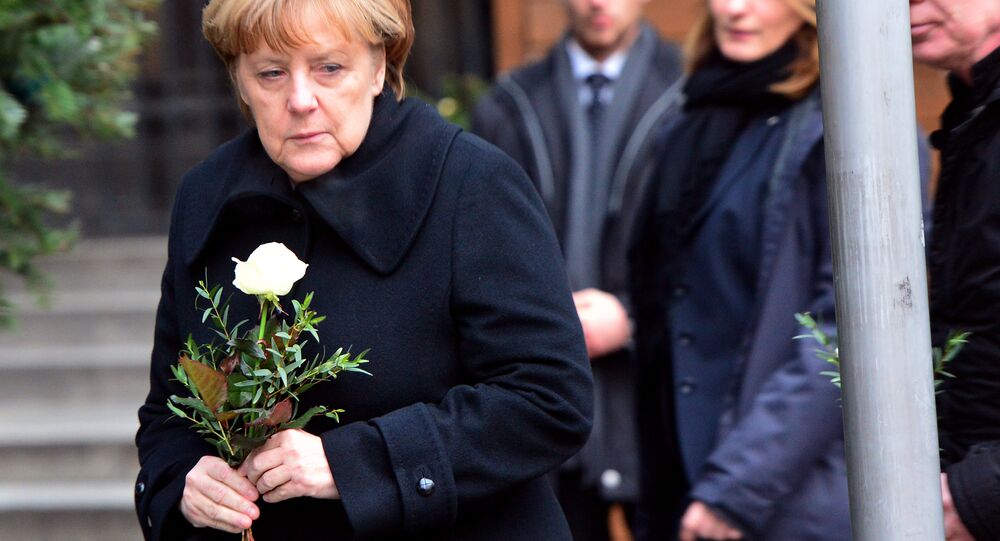 While the investigation into the attack on a Christmas market in Berlin is still going on, German politicians, who disagree with the current policy of the central government, blame German Chancellor Angela Merkel for the tragedy, German magazine Focus Online wrote.

© REUTERS / Fabrizio Bensch
Deadly Berlin Attack No Reason to Close European Borders For Migrants - Juncker
The closer the start of the 2017 election campaign is, the greater is the pressure on German Chancellor Angela Merkel.

No mistake of the country's leader fails to remain unnoticed by her opponents, the magazine wrote.

"Shortly before the start of the 2017 Bundestag election, the Berlin attack has shaken not only the Federal Republic, but also political positions of the head of its government. Whether it is justified or not, critics of the Federal Chancellor put every crime of an asylum seeker in the context of Merkel's refugee policy," the article said.

According to the magazine, the Chancellor can't count on support, even within her own party, when it comes to such disasters. The attack was a shock not only for German residents, but also for the country's political order in general.

"Who is responsible for the terrorist attack of Berlin, is not yet clear. But CSU and AfD see it differently: for them, Angela Merkel clearly bears responsibility for it. In the wake of the 2017 election, the Chancellor is getting as much in trouble as never before. Even her party has become nervous amid the attack," the magazine wrote.

Earlier, German politician and member of Alternative for Germany party Marcus Pretzell blamed Merkel for her open-door policy toward refugees saying that she bears responsibility for the attack.

"When will the German constitutional state undertake retaliatory measures? When will this damned hypocrisy finally been stopped? These are Merkel's deaths!" he wrote in his Twitter.

In his turn, CSU Chairman and Bavarian leader Horst Seehofer said that the German government has to rethink the entire migration and security policy, thus "casting doubts on all decisions Merkel made in the past few years," the article said.

© AFP 2021 / Tobias Schwarz
Germany to Give Over $10,000 to Relatives of Ukrainian Killed in Berlin Attack
According to the magazine, such statements are a part of strategy, which is designed to back Merkel into a corner and give her less chance to retain her leadership.

On Monday, a truck drove into a crowd at a Christmas market in the center of Berlin, killing 12 people and injuring over 40 others. The suspect, 24-year-old asylum seeker from Tunisia Anis Amri, reportedly fled to Milan and was killed there in a shootout with police.

German Chancellor Angela Merkel confirmed Friday that Amri had been shot dead in Milan and said everything pointed to his primary role in the deadly truck ramming. She also said the death of Amri did not end the inquiry as criminal investigators are continuing to search for possible accomplices and pledged that the government will take measures to speed up and increase the number of deportations of Tunisians who have no right to claim asylum in Germany.