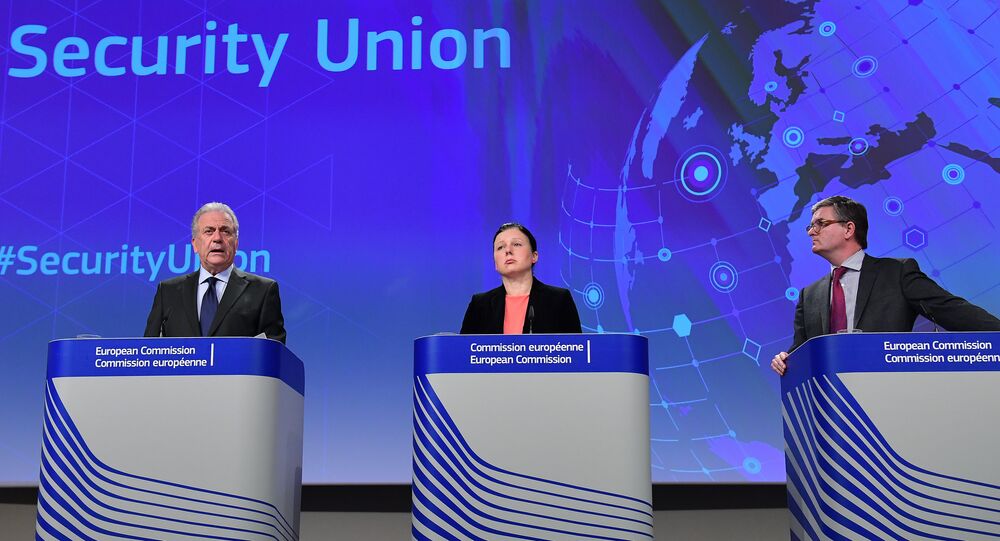 The European Union institutions in Brussels have had their security ramped up, following the terror atrocity in Berlin at a Christmas market on Monday, December 19. Several EU officials have reiterated an intent to not allow terror attacks become a "normalized" part of European life.

The European Union flags were at half-staff as EU staff across Brussels mourned the 12 dead in Berlin, knocked down by an unknown assailant still on the run after Monday's truck attack.

Security has been ramped up, but more than that, there are concerns that after two years of repeated terror attacks across the EU, perceptions of what 'normal life' looks like is becoming bleaker.

Condolences to the families & relatives of all those who were killed or injured in #Berlin. We stand united with the victims in deep sorrow. pic.twitter.com/m56QieNqVM

1 minute of silence. @KGeorgievaEU: For every German, every European, everyone who believes that love is stronger than hate. For all of us.

Then too, a lone man took control of a heavy goods lorry and drove at high speed into a crown of men, women and children.

Vestager said that she hoped "we will find it in us to never accept that this is normal because it is not."

The European Commissioner for Security has said that the EU is prepared to help Germany cope with the aftermath of the Berlin terrorist attack.

Sir Julian King, who was previously the British Ambassador to France, said:

"Overnight there were various contacts with the German authorities and the Berlin authorities in order to first and foremost express our solidarity and condolences. Obviously to say that if now or later there's anything to do to help we'll be there to help."

Sir Julian is responsible for improving co-ordination among EU countries in the wake of various security threats.

However, Brussels itself has been no stranger to the kind of mindless violence that Germany and France has experienced all too often.

On March 22, three explosions hit Brussels during the morning rush hour. Two blasts went off in the departure hall of Brussels' Zaventem Airport while another bomb exploded at the Maalbeek Metro station. 35 were killed, including the three suicide bombers responsible. More than 300 people were injured. Belgium responded by raising the terrorist threat to the highest level.

Looking ahead, Brussels Mayor, Yvan Mayeur, says has also ordered security forces to review all measures being taken around the Brussels Christmas Market, and whether New Year's Eve festivities can go ahead.

We can't ignore risks that exist but there can't be 0 risk either. By standing together we are stronger #security pic.twitter.com/UjuOO7MtAH

Many across Europe are hoping that life can go on without too many restrictions due to the fear of the next unknown, lone wolf attack.

In the meantime, the hunt for the man behind the Berlin market killings continues.