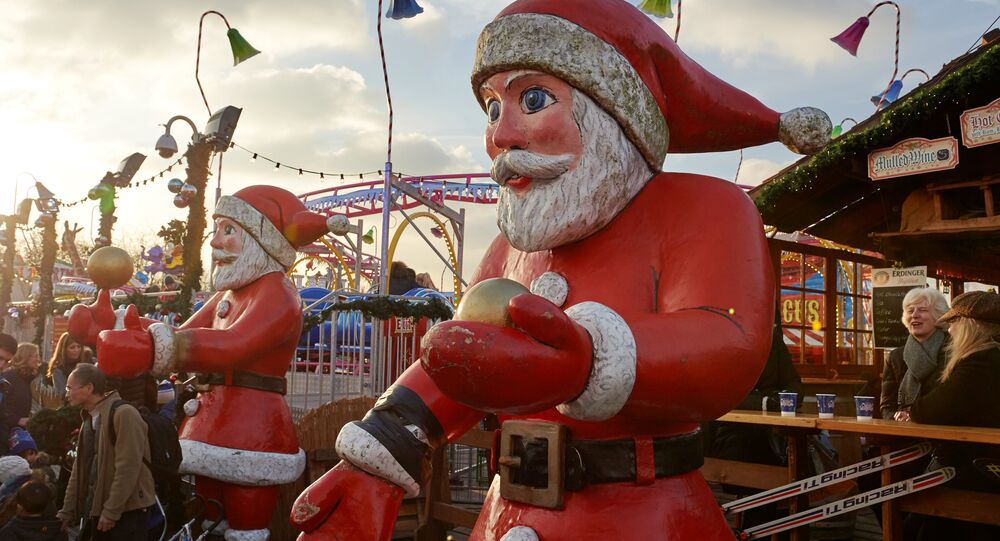 For the second time in 2016, a truck has been used with devastating consequences to target celebrations in Europe; the latest terrorist attack in Germany where a man drove a truck into people perusing a Christmas market in Berlin, has left 12 people dead and 48 others injured.

© REUTERS / Hannibal Hanschke
Truck Attacks: The Unstoppable 'Nightmare Scenario' for Security Services
In November 2016, British intelligence authorities warned the public that terrorists were planning a wave of attacks on crowded Christmas markets throughout Europe. On 19 December 2016, that warning became a reality for Germany after a man drove a truck at Christmas market-goers in Berlin.

Lines of wooden huts selling hot wine, sausages and gifts have become ubiquitous with Christmas in many major cities across Europe, prompting police forces across Europe to review their counter terrorism tactics.

Anyone for sausage; lunch at the German Christmas market in Birmingham!😋🌭 pic.twitter.com/skFuqH9wMJ

​London's Metropolitan Police have since released a statement saying they are reviewing their strategy for all outdoor events following the "awful incidents" in Berlin and Ankara.

Scotland Yard in London says it has "detailed plans for protecting public events over the Christmas and New Year period."

Statement following the incidents in Berlin and Ankara https://t.co/cwTxMq91Jd pic.twitter.com/Axfqzmgcwv

"These already recognize that the threat level is at 'severe', meaning an attack is highly likely, and have considered a range of threats, including the use of large vehicles. As a matter of routine, as a precaution, we review our plans after the attacks overseas, and we are doing so at present following the awful incidents in Berlin and Ankara."

Hyde Park in London is home to Winter Wonderland, a mass of market stalls and fairground rides, and attracts millions of visitors each year.

Leave the hustle and bustle of the festivities below and sore 60 m above Hyde Park on the Giant Wheel https://t.co/eQkwYW4lHH pic.twitter.com/WCtVx9JSo6

"The safety and security of British citizens is the government's number one priority. Clearly in light of what has happened in Berlin, police will be reviewing what is in place," ​a statement from Downing Street said.

All you need to know about the London New year's Eve Fireworks —> https://t.co/Xbpj9vd43n pic.twitter.com/tZssWGPRgL

​Manchester, which hosts a huge Christmas market every year with 350 stalls, will also see more police on the streets and in markets across the city at ten different sites.

#Manchester Town Hall is lit up in the colours of the German flag in tribute to the victims of the #Berlin attack pic.twitter.com/bsH6sFBiH5

​"We will be working in line with the national response and have strengthened our policing presence at the Manchester Christmas markets and stepped up visible patrols," assistant chief constable at Greater Manchester Police said.

No info to suggest Manchester is a target, but after tragic events in Berlin, patrols being increased. MEN report: https://t.co/aR52AB7Lhm

​York, Merseyside and Northumbria have also stepped up police patrols at their Christmas markets.

Birmingham, which claims to hold the largest Christmas market in Europe, outside of Germany and Austria, is also assessing the protection it offers the public. Birmingham has already installed concrete barriers to prevent attacks similar to the one in Nice, France, in July when a truck drove into crowds celebrating Bastille Day earlier this year.

Terrible events in #Berlin last night. We always review events carefully to assess the protection we have in place for our communities.

​"A number of security measures were agreed before the market opened, including installing some concrete bollards at a number of locations," a West Midlands Police spokesperson said.  It's thought 5.5 million people will visit the market before it closes on December 29, 2016.

The terrorist threat level in the UK remains at "severe" meaning an attack is "highly likely."