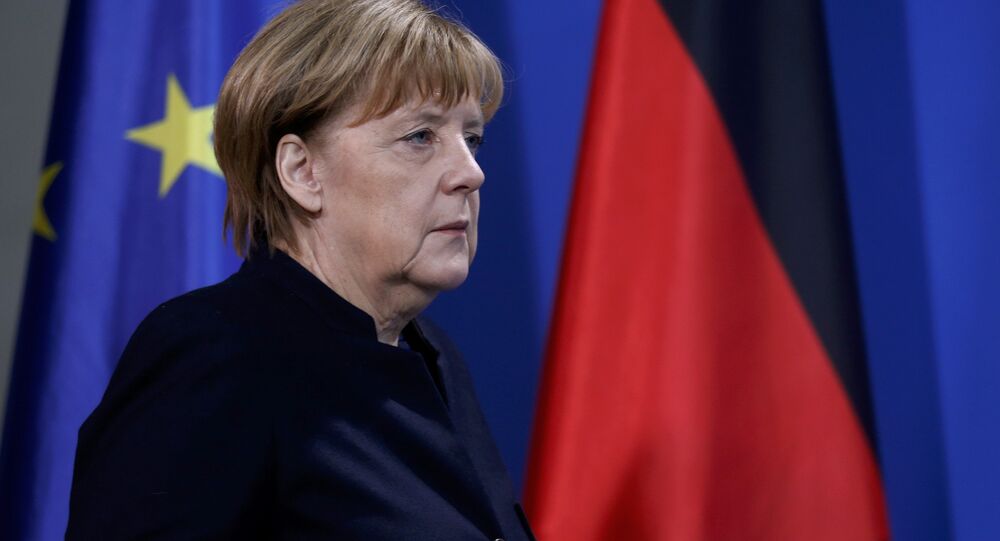 German Chancellor Angela Merkel is facing a huge dilemma as police and security services work to piece together the facts behind the latest apparent terror atrocity to hit Germany - killing 12, injuring nearly 50 - as the hunt continues for the perpetrator.

© AFP 2021 / DPA/Bernd Von Jutrczenka
Asylum seeker (C, L) takes a selfie picture with German Chancellor Angela Merkel (C, R) following Merkel's visit at a branch of the Federal Office for Migration and Refugees and a camp for asylum-seekers in Berlin on September 10, 2015.

She has championed the cause of a humanitarian response to the migrant crisis which has caused unrest within Germany and throughout Europe, with many claiming the sheer volume of migrants crossing the continent has disguised the rising threat of terrorism.

"It would be especially hard for us all to bear if it were confirmed that (the) person who committed this act was someone who sought protection and asylum," a shocked Merkel said in the aftermath of the Berlin attack.

Her interior minister Thomas de Maziere told reporters he had "no doubt" this was a terrorist attack.

Police originally detained a man who allegedly fled from the truck which was used to ram shoppers at the traditional Berlin Christmas mart. Local media reports suggest he is a 23-year-old migrant from Pakistan known to police for committing minor offenses and who had been registered as living in temporary accommodation at the now defunct Tempelhof airport.

However, German officials later said he was not the attacker, sparking fears that the attacker was still on the loose.

Flags at half staff at @GermanyDiplo in mourning of the victims of#Berlin #Breitscheidplatz. Our thoughts are with their families+friends. pic.twitter.com/3tXhfPZ7YL

The impact of the attack in Germany's capital was summed up by the interior minister of the German state of Saarland, Klaus Bouillon, who told German broadcaster SR:

"We must say that we are in a state of war, although some people, who always only want to see good, do not want to see this."

Merkel has announced she will stand for a fourth term as German chancellor at the elections due in the Fall of 2017, but her credibility hangs on a thread as she attempts to balance her humanitarian stance on refugees and her principle role as chancellor — the security and wellbeing of her people.

The latest attack is the most devastating of a string of attacks to have hit Germany in the past year. In October, police arrested a 22-year-old Syrian refugee following the discovery of explosives and other bomb-making equipment at his apartment in Chemnitz, believed to be part of a plot to attack Berlin airport. The suspect hanged himself in a cell.

© REUTERS / Fabrizio Bensch
German police search a housing area in the eastern city of Chemnitz on suspicion that a bomb attack was being planned in Germany, October 8, 2016

In July, 15 people were injured in a crowded wine bar near a music festival in the Bavarian town of Ansbach after a rejected Syrian asylum seeker detonated an explosive device, which also killed him.

Also in July, a 17-year-old asylum seeker wielding an axe and a knife seriously injured four tourists before being shot dead by police.