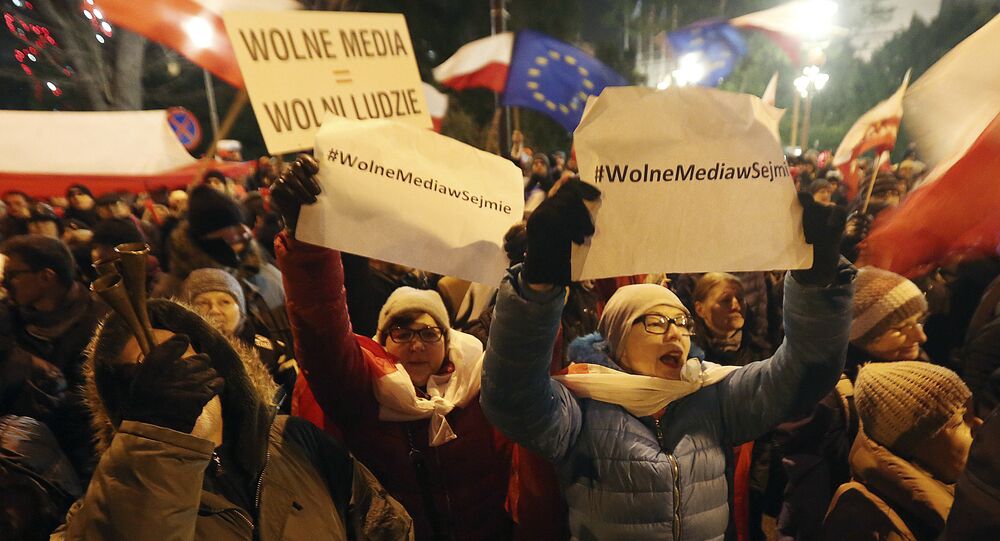 Polish Deputy Prime Minister Jaroslaw Gowin said that all parties to the political conflict in Poland should take a step back to reach compromise.

© REUTERS / Agencja Gazeta/Kuba Atys
Tusk Tackles Poland Over Constitution, Media Protests as EU Crisis Looms
WARSAW (Sputnik) — The proposal of the speaker of the lower house of the Polish legislature to restrict journalists' access to the parliament building is not supported by the government or ruling Law and Justice party (PiS), Deputy Prime Minister Jaroslaw Gowin said Monday.

The members of Polish opposition parties have been staging sit-in protests since Friday, when speaker Marek Kuchcinski excluded one of the lawmakers from the debates over his speech against the planned restriction of the media access to parliament, which led to the opposition parliament members storming the main hall and forcing the rest of the lawmakers to convene in another room.

"To be honest, I do not know anyone among the members of the government, PiS lawmakers or coalition parties, who likes the proposals of speaker Kuchcinski," Gowin said as quoted by the TVN24 broadcaster.

© AP Photo / Alik Keplicz
Europe to Act Indirectly to Restore Democracy in Poland - Polish Opposition Lawmaker
According to the deputy prime minister, all parties to the conflict should take a step back to reach compromise.

Gowin added that the proposals on limited media access were not planned carefully and such changes could only be implemented through the dialogue with journalists.

The oppositions' sit-in protests and public demonstrations on the streets of Warsaw have been going on since late Friday, with the protestants demanding to scrap the restrictions on the media, which would allow only a limited number of television stations in Poland to record parliamentary sessions starting next year. The number of journalists allowed to attend the parliament sessions and have direct access to the lawmakers would be reduced to two per outlet.