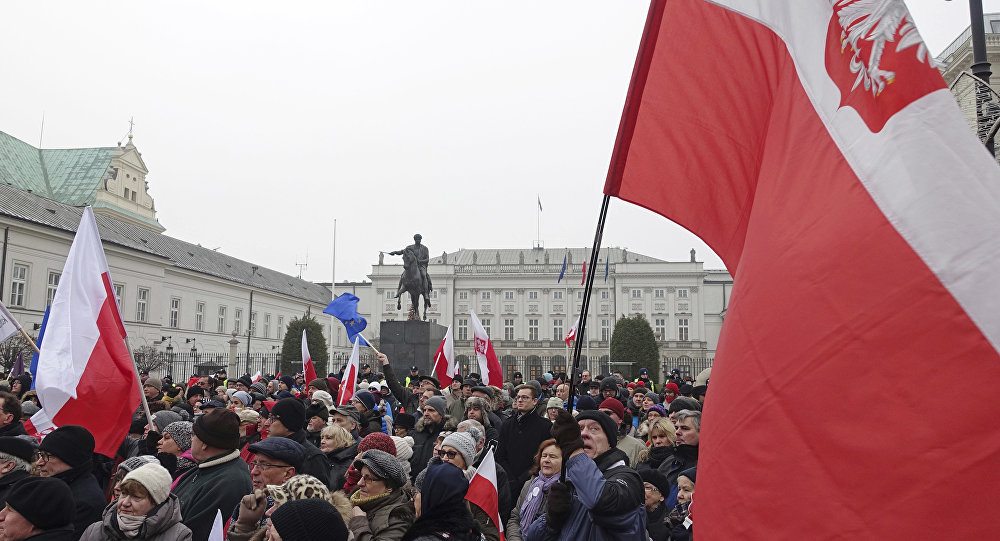 European countries will act indirectly in an attempt to bring democracy back to the country, opposition Civic Platform member Stefan Niesiolowski told Sputnik on Saturday.

Earlier in the day, several thousand people took part in protests near the presidential palace in Warsaw in response to the PiS decision to limit media presence in the Polish parliament. The new media restrictions allow only a limited number of TV stations in Poland to record parliamentary sessions starting from next year. A number of Polish news organizations responded by boycotting any coverage of parliamentary activities.

"Poland is a ‘sick man of Europe,’ both the European Commission and the European Parliament discuss its condition. But there is no direct opportunity to interfere and restore democracy but only to act indirectly so I believe that Europe will take these actions," Niesiolowski said.

"As long as nobody is killed, as long as the PiS does not resort to violence, foreign [countries] will not say a word," he stressed.

© REUTERS / Kacper Pempel
Poland Set for Historic Clash With Brussels Over Law and Democracy
Niesiolowski also said that irritation level of people toward the ruling party was quite high but the party’s leader Jaroslaw Kaczynski was unlikely to concede.

Poland has been embroiled in a political standoff since Friday, when opposition Civic Platform member Michal Szczerbaan was removed from the lower house after criticizing the PiS for limits on media presence in the parliament. Opposition lawmakers then disrupted the session and the house speaker adjourned before convening members of parliament in a different room, where several laws were passed without electronic voting systems.

Opposition refused to recognize the session and protesters gathered near the Sejm, clashing with police early on Saturday as PiS members, including party leader, left the building while escorted by security.

The presidential palace protest was organized by the Civic Platform, the Committee for the Defense of Democracy (KOD) and the Nowoczesna party.