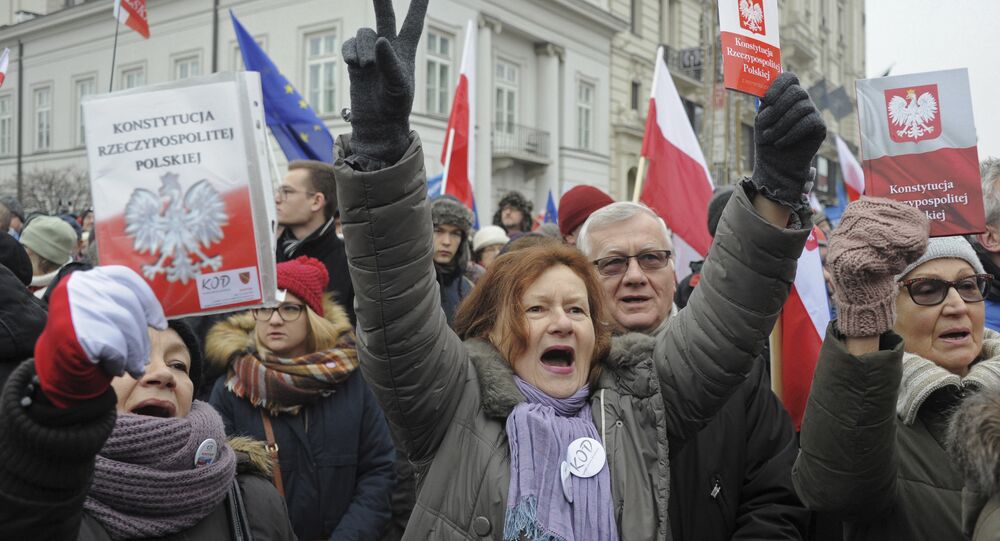 Several thousand people are taking part in protests against Poland's ruling Law and Justice (PiS) party near the presidential palace in Warsaw, a RIA Novosti correspondent reported from the site of events on Saturday.

WARSAW (Sputnik) — Poland has been embroiled in a political standoff since Friday, when opposition Civic Platform member Michal Szczerbaan was removed from the lower house after criticizing the PiS decision to limit media presence in the Polish parliament.

Spontaneous mass protests for media freedom in Warsaw, now starting in Krakow Szczecin and other cities throughout Poland #WolneMediawSejmie pic.twitter.com/qgihD4hQ2d

Opposition lawmakers then disrupted the session and the house speaker adjourned before convening members of parliament in a different room, where several laws were passed without electronic voting systems.

The presidential palace protest was organized by the Civic Platform, the Committee for the Defense of Democracy (KOD) and the Nowoczesna party. Demonstrators chanted "freedom, equality, democracy" and "let's defend democracy" and sang the national anthem.

"Yesterday, the ruling majority turned the Sejm into a one-party bureau. We do not agree with such methods," KOD leader Mateusz Kijowski told supporters.

The new media restrictions allow only a limited number of TV stations in Poland to record parliamentary sessions starting from next year. A number of Polish news organizations responded by boycotting any coverage of parliamentary activities on Friday. Protests are continuing across the country in front of PiS offices.

'We Taught French How to Use a Fork': Social Media React to Poland's Statement