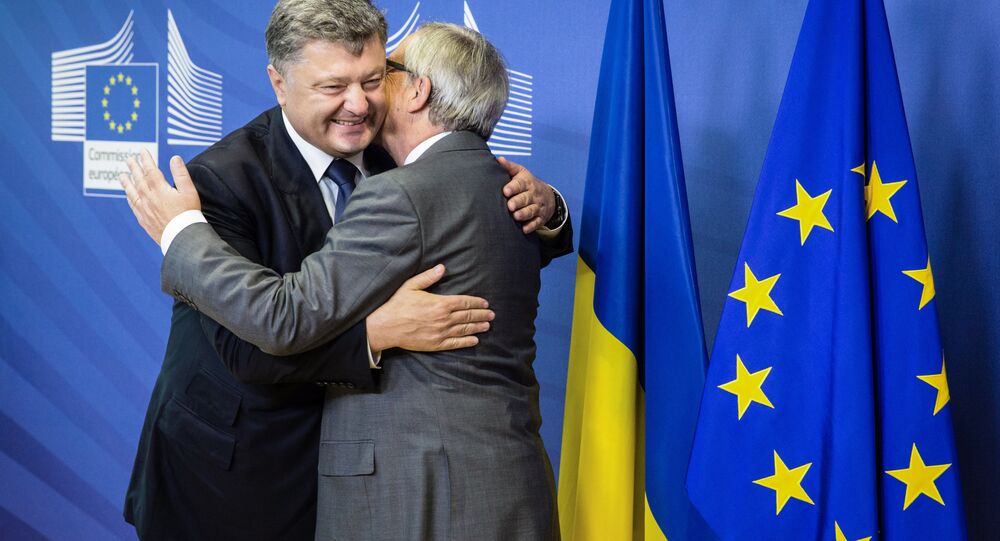 The European Parliament has approved a legal mechanism that would enable the implementation of visa-free regimes with Ukraine and Georgia. Radio Sputnik discussed the issue with Robert Oulds, political analyst and Director of a London-based independent think tank, the Bruges Group.

The corresponding decision was made by the majority of MEP's on Thursday. EU lawmakers are now set to vote on the visa liberalization itself for Georgia in January and may vote on Ukraine in February.

According to the expert, the European Union should have acknowledged the vote of the Dutch people, but it seems that the EU was lured by the opportunity to get access to a cheaper labor force.

"Especially, in case of Georgia, the European Union does seem to be willing to tuck into cheap labor opportunity," the expert said.

At the same time, the war in Ukraine is still going on and there is not much improvement in terms of violence in the country. Moreover, both Ukraine and Georgia suffer serious economic problems and are seeking to solve them with the help of the West.

"These countries do suffer from a great deal of economic hardships. The Ukrainian economy has been severely damaged, and Georgia has fundamental problems as well," Oulds said, adding that residents of are likely to leave these countries and come to the European Union in search of better economic opportunities.

At the same time, Oulds argued, the new migration inflow could pose a serious challenge to European countries.

"Immigration is a very big issue. This is the key reason why Britain voted to leave the European Union. There is a great amount of unhappiness about immigration. So, opening up the European Union and creating a situation where more people will come from the East, will just add to the great attention that exists in Europe at the moment," the expert stated.

© AP Photo / Alik Keplicz
Visa-Free Regime for Ukraine? 'Another Kind of Danger Europe Will Have to Face'
Earlier, Czech MP Denek Ondracek said that the inflow of Ukrainian migrants to Europe will be a serious challenge to the European labor market.

"A company will always prefer to hire a Ukrainian, simply because it can pay them less," the expert stated.

The proposal for the visa waiver for Georgia was issued by the European Commission on March 9 since the country met the conditions for the visa requirement exemption. Later in July, the European Parliament's Committee on Foreign Affairs also recommended granting visa-free travel to the residents of Ukraine, Georgia and Kosovo.