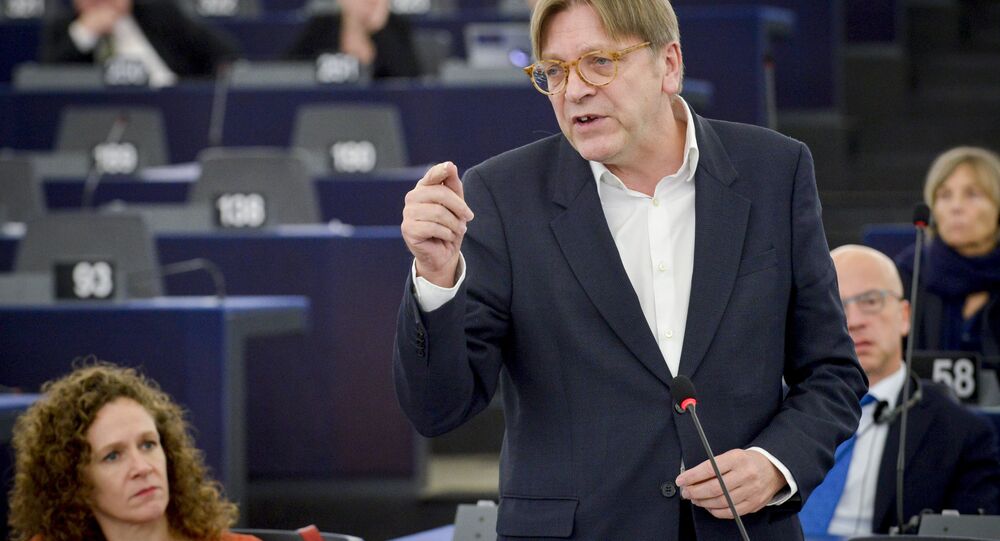 The former Prime Minister of Belgium, Guy Verhofstadt is gathering international support for a bid to stand for the presidency of the European Parliament amid a simmering row between the two largest political groups that had previously shared the position as part of a 'grand coalition'.

© REUTERS / Eric Vidal
European Parliament in Last-Ditch Horse Trading Over 'Backroom' Presidency Post
He has drawn the support of the prime ministers of the Netherlands, Denmark, Luxembourg, Finland, Slovenia and Estonia as well as no fewer than five EU Commissioners, including Cecilia Malmström, the Commissioner for Trade and Margrethe Vestager, the Commissioner for Competition.

Verhofstadt — who is President of the Alliance of Liberals and Democrats (ALDE) group in the parliament — is making his move at a time of turbulence in the presidency as the two largest political groups, the European People's Party (EPP) and the Socialists and Democrats (S&D) are embroiled in a political row over the presidency.

The EPP and the S&D have been in 'grand coalition' since 2004, agreeing to work together on the work of the parliament in return for sharing the presidency between them.

The president in the first half of the current parliament, which began in 2014, was the S&D's Michael Schulz, whose role should have passed to the EPP group. However, the S&D group president, the Italian politician, Gianni Pittella has put himself forward for the presidency, threatening the collapse of the 'grand coalition'.

Ahead of the European Council meeting, December 15, the EU prime ministers and Commissioners said it would be appropriate if the three institutions of the EU — the Council, Commission and Parliament —reflected the balance of power in European politics and declared their support for Verhofstadt for President of the European Parliament.

EU liberal leaders believe @GuyVerhofstadt would be the best president for the European Parliament. Spread the word https://t.co/X4TDI0wadH

​"The European Union faces several severe crises at once. There is the persistent economic crisis, the refugee crisis, the terrorist threats and the geopolitical instability in our neighborhood. The liberal Prime Ministers in the Council want to see these crises resolved in an effective and efficient manner. We see the European Parliament as a reliable partner to make this happen," said the President of the ALDE Party Hans van Baalen.

"The European Parliament will choose a new President on the 17th of January. We are sure its members will make a wise choice. The European Parliament is an honorable institution that deserves to be headed by someone who combines vision with extensive experience and the ability to build bridges across political divides. With Guy Verhofstadt, we have an excellent candidate who has these qualities."

The Commission President Jean-Claude Juncker and the Council President Donald Tusk are both EPP politicians, so Verhofstadt's bid on behalf of the ALDE group is seen as an attempt to rebalance the political influence at the top of one of the three main EU institutions.

Meanwhile, Verhofstadt has fired a warning shot across Tusk's bows in a row over the negotiations over Britain's exit from the EU — known as Brexit. Tusk's Council released a statement following the latest Council meeting, December 15, saying it would lead the Brexit talks. Verhofstadt hit back saying Parliament should be an equal part of the negotiations from the start.

It seems #EUCO plans to sideline @Europarl_EN in Brexit negotiations. If they want us to talk straight to British authorities they've got it pic.twitter.com/P4jODWQcTr

​If Verhofstadt were to become the parliament president and Tusk insists on being the lead role in Brexit — at the same time as Juncker has also appointed his own chief negotiator — the Brexit talks could become deeply embroiled in EU personal politics.