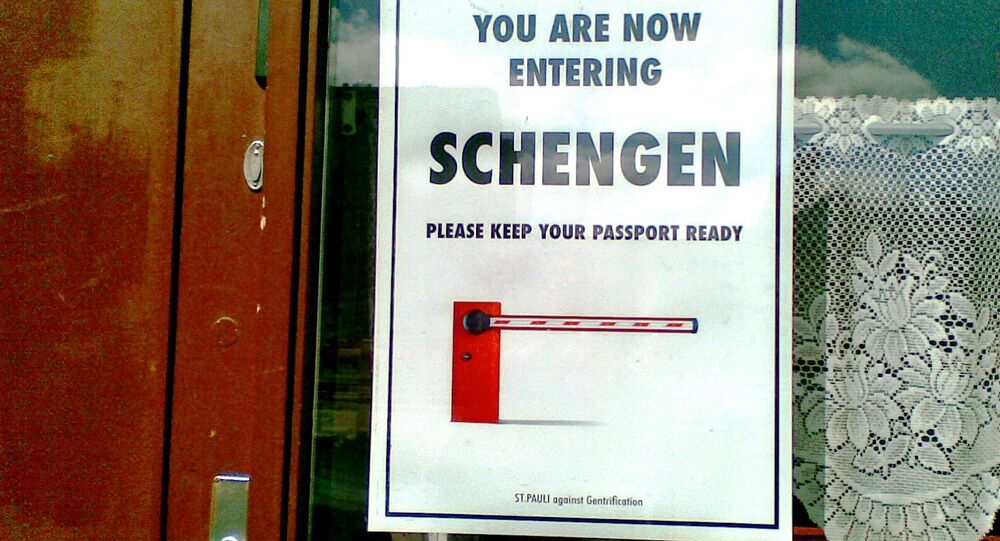 On Thursday the European Parliament voted to bring the goal of visa-free travel to EU Schengen Zone countries much closer to reality for Ukraine and Georgia. The MEPs will now vote on visa liberalization for Georgia in January, and for Ukraine in February.

In an interview with Sputnik Turkey, Mehmet Günal, deputy head of the parliamentary faction of the Nationalistic Movement Party, slammed the decision as fresh proof of the EU’s double standards used against his country.

© AP Photo / Lefteris Pitarakis
EU Must 'Ensure Liberalization' of Visas for Turkey or Face New Migrant Influx
Saying that the “Turkish public is getting tired of this,” he added that it was time for Turkey to reconsider its relations with the European Union.

“Now they want to freeze negotiations [on Turkey’s accession to the EU]. We must do what is best for us. While underscoring the need to stick to the terms of the agreement on migrants, [the EU] simultaneously insists that we amend our antiterrorist laws, which we can’t do,” he said.

He added that Turkey’s bid to join the EU “can’t drag on for 53 years,” and that the Turkish people are sick and tired of this never-ending process, which they see as a graphic example of double standards on the part of Brussels.

“As long as these double standards apply, the Turkish public and those at the top will denounce this. How can they talk about ‘possible bilateral negotiations’” if they are now freezing the negotiating process [on Turkey’s accession to the EU]?” Günal  wondered.

“The EU must show its true face. If the sides are sincere in their aspirations they take up a  divisive issue and think how they can resolve it. But in reality it all comes down to the search for excuses. In this context (the European Parliament’s decision on visa liberalization with Ukraine and Georgia] is more proof of the double standards they use against us. Just like their earlier recommendation to suspend the talks [with Turkey],” Mehmet Günal fumed.

In an interview with Sputnik Turkey, Cahit Özkan, a parliamentary deputy from the ruling Justice and Development Party, accused the European Parliament of demonstrating its longtime wish to make Turkey, Russia and Ukraine instrumental in its “hegemonistic ambitions.”

“After the failed coup we had in July we saw with our own eyes that the European Parliament is not a friend. If the coup succeeded they would have probably granted us visa-free travel to the EU, but our country would fall under their complete control, which is exactly what we can now see in Ukraine,” Cahit Özkan said.

© Sputnik / Sergei Kirkach
Visa-Free Regime for Ukraine EU's Attempt to Expand Sphere of Influence – Turkey
He added that because Turkey quashed the “treacherous coup attempt” the EU failed to grant it visa-free travel even though Ankara had accommodated all of its demands.

“Meanwhile, we can see how, in its bid to expand its sphere of influence and achieve strategic superiority over Russia, the  European Parliament decided to waive visas for Ukraine, which hasd failed to meet the very same demands that we haved met. This is because Ukraine agreed to place itself under the economic, political and cultural control of the West as a counterbalance to Russia,” Cahit Özkan continued.

He said that he was sure that even though the EU pretends to support and help Ukraine, it won’t be very long before the world realizes that the West only tries to make Ukraine “serve its political ends”

“Turkey was denied visa-free travel to the EU because its people stood up for their right to political sovereignty and territorial integrity. The Ukrainians got this visa-free status as a reward for their recognition of Western control over their country,” Cahit Özkan added.

On November 24, European lawmakers voted in favor of freezing EU accession talks with Turkey until it lifts restrictive measures in the country in place since the failed coup on July 15.