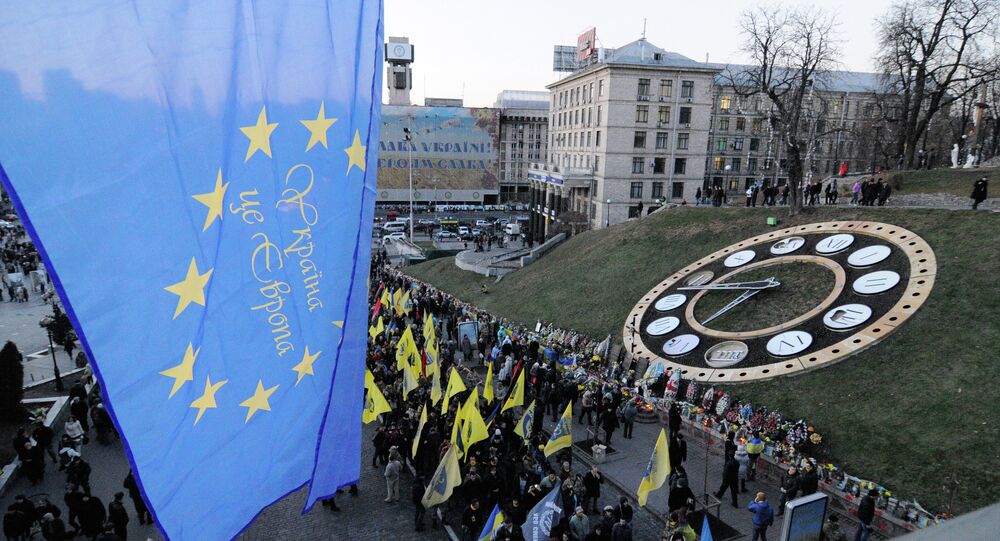 MOSCOW (Sputnik) — Western countries interfered in Ukraine's domestic affairs during the 2014 Maidan events, former Ukrainian Prime Minister Mykola Azarov said Friday, noting that a prominent US senator had called for a Ukraine coup at the time.

"In my opinion, what was happening in Kiev on Maidan was an absolutely uncivil, rude interference in Ukraine’s domestic affairs from foreign countries. It is beyond question. If [US Senator John] McCain addressed [the crowd] on Maidan and called for the overthrow of the ruling power, what does it speak about?" Azarov said, speaking  at Moscow’s Dorogomilovsky Court.

© Sputnik / Andrey Stenin
Top Ukrainian Ex-Official Claims Georgian, Baltics Citizens Involved in Maidan Deaths
Azarov stressed that the role of the United States in Ukraine's coup could be proved by the statements of US top officials.

"The Americans were the patrons of the coup, [US Assistant Secretary of State for European and Eurasian Affairs Victoria] Nuland's statement was about that," Azarov said.

In early February 2014, Nuland in a leaked recorded phone conversation with US Ambassador to Ukraine Geoffrey Pyatt discussed her preference for the next prime minister of Ukraine ahead of President Viktor Yanukovych being toppled on February 22, 2014 in a violent coup.

Moreover, the EU warned former Ukrainian government of the possibility of a coup before the 2014 Maidan events, hinting at the necessity to sign an association agreement to avoid a regime change, Mykola Azarov added.

© Sputnik / Andrei Stenin
Formal Legal Judgment on Ukraine's Maidan Coup 'Would Benefit Whole World'
According to Azarov, following Ukraine's rejection to sign the association agreement, Kiev held "tough talks" with the EU Commission with then-European Commissioner Stefan Fule saying that in case the government does not sign the agreement, "another prime minister and another president would."

Azarov noted he was astonished by the reaction of some EU leaders to the use of Ukrainian government’s right to delay or cancel the signing of the agreement. He stressed that the former government’s position was to avoid signing the agreement which could have led to economic crisis.

Besides Azarov, former head of the presidential administration Andrey Klyuev, former Interian Minister Vitaliy Zakharchenko and former Prosecutor General Viktor Pshonka are expected to be heard by the court on Friday.

In his lawsuit, Oleynik asked the court to establish the fact of a coup in Ukraine which will automatically lead to recognition of the current government of Ukraine as illegitimate.

© Sputnik / Andrey Stenin
Ukrainian Elections: Maidan Dreams Betrayed, Candidates Buy Votes for Food
On Thursday, Dorogomilovsky Court started legal proceedings in the case of recognizing the 2014 events in Ukraine as a coup d'etat on the lawsuit filed by former Ukranian lawmaker Vladimir Oleynik. He asked the court to establish the fact of a coup in Ukraine which will automatically lead to recognition of the current government of Ukraine illegitimate. A number of former ministers are expected to be interrogated on Friday.

"I unambiguously regard [the 2014 events in Ukraine] as a coup," Azarov said at the hearing.

A political crisis erupted in Ukraine in November 2013, when the country's authorities announced to suspend its European integration process. The protests that started in central Kiev's Independence Square, or Maidan Nezalezhnosti, spread across the country and led to a government coup in February, forcing then-President Viktor Yanukovych to flee the country.