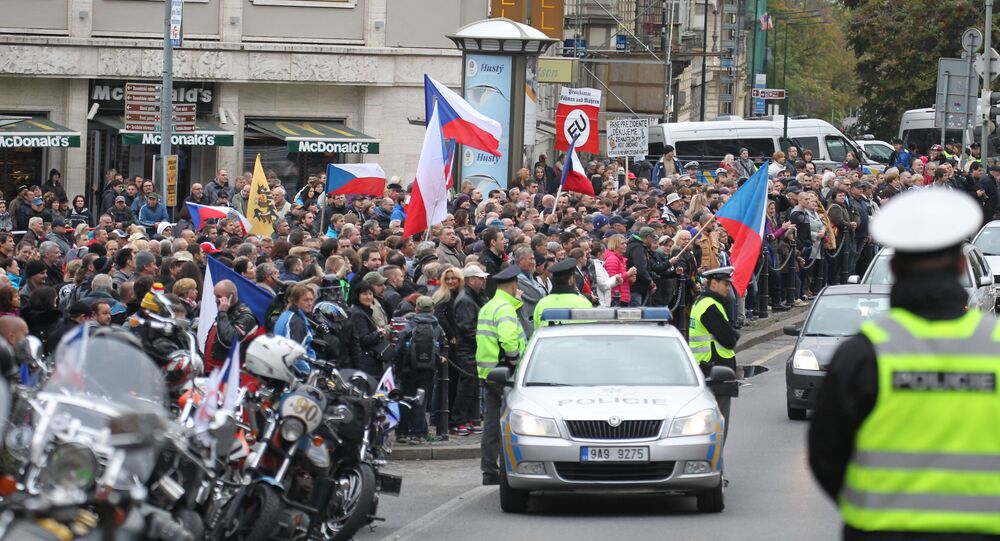 A panel of academics in London have detailed the rise of xenophobia and Islamophobia within Western Europe by identifying three areas of concern, including the issue of Muslim identity in the public space, a crisis of white privilege, and the breakdown of neoliberalism.

"I would go as far to say, that before the early 1990s, there were no Muslims in Great Britain, or in many parts of Western Europe. And by that I mean that the idea of being a Muslim in the public space just did not exist. There was a clear racial order where the indigenous population had a dominating white state of mind — and pigmentation — and there were pockets of growing ethnic minority communities who conducted their faiths and practices amongst themselves," Professor Salman Sayyid, from the University of Leeds in UK, told the conference.

Speaking at The Rise of Xenophobia and Islamophobia in Europe conference in London, Professor Sayyid added:

"In 1990 the global protest against author Salman Rushdie's 'Satanic Verses' book was seen as one of the largest mobilizations of people by Muslims. In a wider UK climate of a trade union crisis, economic recession and a disgruntled working class, this was the first sign of the Muslim public presence that society became wary of."

Panel on the rise of #Islamophobia in Europe, organized by #SETA and #BITAF London. pic.twitter.com/h1RFiYbSIF

​According to Sayyid, Muslims in Europe and outside of the continent's borders are thought of as a 'problem' beyond the popular trope detailing a fear of ethnic minorities and refugee communities taking over Western values and culture. When these refugees and migrants happen to be Muslims, the problem is magnified.

Dr. Alekandra Lewicki, from the Free University of Berlin, provided analysis of parallels from Germany with trends across Western Europe:

"Racism in Germany has been prevalent for some time but now it has been diverted into a mainstream political movement by the likes of the right-wing Alternative For Germany populist party. There has been a significant rise in racism and xenophobic attacks on mosques over the last few years in particular, and the public perception — that it has all been triggered by the refugee crisis — is not very accurate. In my opinion, inhibition has been lost and holding right-wing, hateful views has been legitimized by populist politics," Lewicki said.

Dr. Farid Hafez, a researcher at Salzburg University in Austria, provided input on the trends emerging in his geographical region.

"Austria has a strong far-right movement and what we are also seeing here is the very modern rise of a new style of right-wing populist politics. Similar to countries such as Germany, and also in wider western European countries such as Belgium, Sweden, and France, racism and xenophobia has always existed, but now it has been manipulated to reach extreme levels. We have also seen signs of unusual far-right alliances with some fringe Zionist movements — who also perceive Islam as a threat in Europe to fight against," Hafez told the conference.

Hafez suggested that there has been a significant failure by central parties in Austria who have been unable to provide an alternative worldview to the dissolving identity of their European Union nation-states. The notion of what it means to be British, Dutch, German or French has become blurred, he opined, resulting in a major identity crisis. Populist movements have become the only choice for people seeking real change.

All this nationalism, populism and xenophobia on the rise around the world. That's worked out well for humanity in the past, right?

​Sayyid elaborated on the identity crisis of indigenous communities in Western Europe.

"In the US we have had a black president. In the UK we have just seen elected an ethnic, Muslim mayor, and these become justifications to claim that society is no longer racist. Farage is not racist if you ask him, he claims to be defending white, British cultural values. The far-right movements also claim they are not racists, but are defending white privilege. So Islamophobia and xenophobia has been conditioned by the crisis of what it means to be white in a society where everyone wishes for equality," he told Sputnik.

When asked what the panel felt is the proper response to the rise of vicious cases of abuse and hateful attacks in public settings, Sayyid responded, "Collective action and mobilization is difficult, especially amongst minority communities who may also see other levels of sectarian or cultural divisions amongst themselves. In Islam itself, there is significant diversity and so any collective consciousness is remarkable, if it exists. We must also remember that the rise in hate crimes associated with those who hold xenophobic views doesn't just affect Muslims and ethnic minorities, it affects all of society."

brexit is not about class; it's about a minority of agitators manipulating the masses for their own selfish ends https://t.co/mSrTBavMm8

​"The only response is for progressive movements to organize and to resist the divisive right-wing movement. All historical transformations have been a struggle, and we are now very much in the midst of a very new state of struggle," Sayyid told Sputnik.