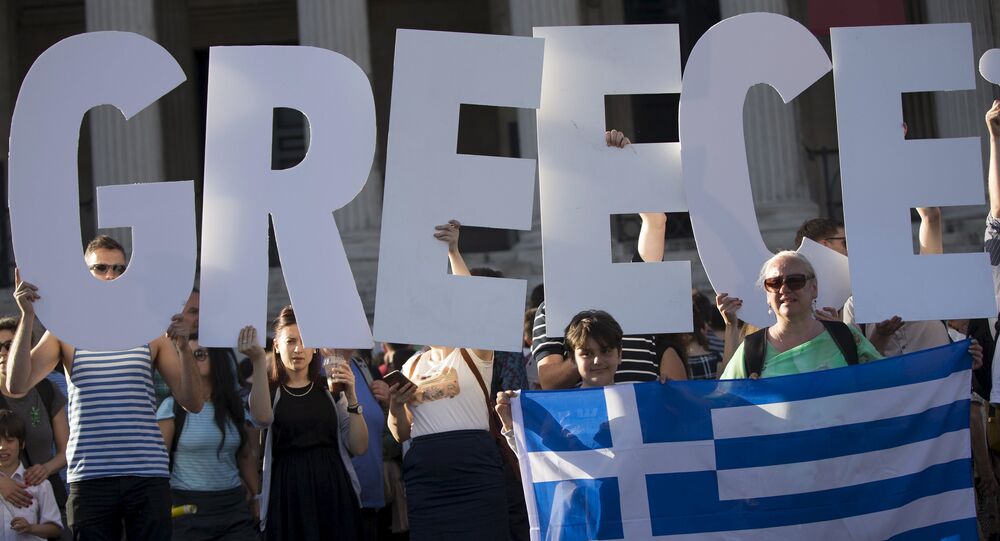 French President Francois Hollande expressed support for Greece in the situation when the debt relief process has been put on hold by the European Stability Mechanism (ESM) after Athens announced they wanted to spend additional resources for pensions.

© AP Photo / Petros Giannakouris
Greece Discusses Prospects of Cooperation With EAEU - Foreign Ministry
BRUSSELS (Sputnik) — The Eurogroup has agreed on December 5 to start the so-called short-term debt-relief plan for Greece. However, several days later without consulting the eurozone representatives Greek Prime Minister Alexis Tsipras announced his government's plan to spend additional resources as a bonus for pensioners earning below €850 ($886) a month. The ESM therefore decided to put the debt-relief plan on temporary hold.

"We cannot demand from Greece additional efforts, or impede with the country taking certain sovereign decisions that pay respect to agreements made in Brussels for the future of Greece," Hollande told journalists before the EU summit.

Prime Minister Tsipras announced on Sunday that ahead of Christmas the government would spend €617 million ($643 million) on almost 1,6 million retired citizens that get pensions of less than €850 ($886) a month. The money is provided from the additional funds that the government managed to collect beyond its obligations. On December 14, the Greek minister of finance explained that the spending does not violate agreement made with European lenders.

© REUTERS / Michalis Karagiannis
France Asks Greece to Help Trace Terrorist Suspects
The Greek debt crisis erupted in 2010 with a number of austerity packages adopted by the parliament and several bailout payments provided by the European Commission, the European Central Bank and the International Monetary Fund. Greece's international creditors signed an agreement with Athens last summer, approving a third bailout package worth about 86 billion euros ($97.3 billion) in exchange for austerity reforms, including pension cuts and tax hikes. The country's government led by Prime Minister Alexis Tsipras pushed ahead with the reforms, and the prime minister has previously stated that he expected the country's GDP to return to growth by 2017.

In October, eurozone finance ministers unlocked a $1.2-billion installment of the bailout after the completion of the first review of Greek reforms. Another $3 billion were unlocked in late October.