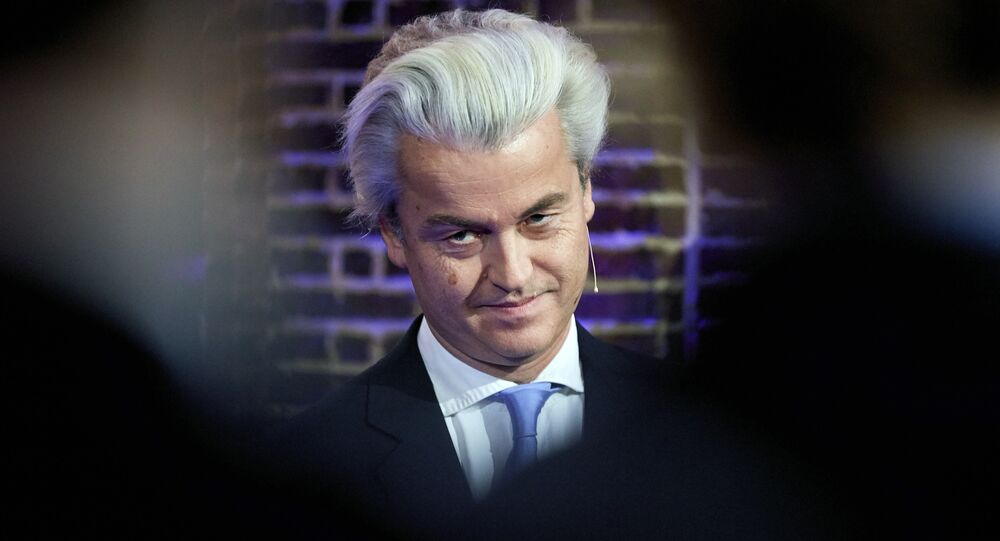 On December 9, Freedom party (PVV) leader Geert Wilders was found guilty of inciting "racial discrimination and hatred" against Moroccans living in the Netherlands. However, Dutch polling experts have told Sputnik that the ruling may help him win power.

The charges related to a speech Wilders gave at the end of the Dutch regional election campaign in 2014. He asked a crowd of PVV supporters whether they wanted "more or fewer Moroccans" — after the audience howled for the latter, he responded that he would "take care of that." Wilders claimed he had been speaking strictly about "criminal Moroccans", and that Moroccans were not a race, but his defense was not accepted by the court.

Three PVV hating judges declare that Moroccans are a race and convict me and half of the Netherlands.

Following the verdict, Wilders uploaded a statement to YouTube denouncing the court's verdict.

"The Netherlands have become a sick country. I am not a racist and neither are my voters. Support for Freedom is keeps growing every day. The Dutch want their country back."

The court was lenient with Wilders, waiving the fine of US$5,300 (€5,000) recommended by the government on the basis conviction was punishment enough. His luck does not stop there — Dutch political analyst Maurice de Hond suggested to Sputnik the verdict could well help the PVV in the March 17, 2017 general election.

"Before the trial, I put the PVV's chances of being the biggest party at 50% — the result has increased the odds even further. It's not just Wilders' supporters that are extremely angry about him being punished just for making statements — so are voters who back other parties but agree with his statements. It will increase the PVV's support, and increase voter turnout — in his favor."

@geertwilderspvv @washtimes by persecuting wilders the court is indirectly discriminating those who are dutch. In their point of vieuw

These sentiments are shared by Tim de Beer, an opinion expert at polling firm Kantar NIPO. In the wake of the ruling, he told Sputnik, the PVV stands at around 25 percent in the polls, and is the clear frontrunner — the Liberal party is behind on roughly 20 percent. This would equate to around 35 seats and 25 seats respectively in the country's legislature.

@EuropeElects Excellent polls for Wilders, hopefully he wins even more to prevent a left wing coalition.

Still, Wilders' chances of becoming the next Dutch prime minister, or playing any role in the new Dutch government, are far from certain. The Netherlands' highly proportional voting system means the PVV can likely only enter government in a coalition. Mr. de Hond notes that the Dutch government is typically comprised of four parties, but every other national party has ruled out governing with Wilders.

The only valid verdict is that of the Dutch voters on March 15. https://t.co/6rJ3NrQ2j8

Conversely, Mr. de Beer adds that the number of parties vying for power is almost at a record level, with 70 on the ballot presently. Whether that number will eventually exceed the record total of 75, seen in 2006, remains to be confirmed, but the deadline for registration is December 19. Many of the smaller, newer parties on the ballot are emulating Wilders' policies and rhetoric — this may open up opportunities for Wilders to govern, but support for these parties is likely to be negligible, Mr. de Beer believes, as Wilders is seen as the "real deal."

"There's an undercurrent sweeping the Western world, an agitation for change. Dutch voters want a revolution, similar to the one that happened in the US on November 8."

Wilders has a history of making controversial statements about immigration and Islam, resulting legal troubles. In a 2007 article, he compared the Quran to Mein Kampf, calling for the book to be outlawed and referring to Mohammed as the devil. He was subsequently tried on hate speech charges in 2010-2011, but that time the judges ruled Wilders' speech constituted protected criticism of a religion, rather than an insult or incitement against its followers.

In 2008, Geert Wilders called for a halt on all immigration to the Netherlands, and for all foreign residents of the country to be paid to resettle elsewhere.

In 2009, he proposed the imposition of a tax on hijab wearers of $US1,064 in parliament, with the money raised spent on women's emancipation projects.

In 2010, he led chants of "No mosque here!" near the site of a planned Muslim cultural center in Lower Manhattan its opponents called the "Ground Zero Mosque."

Netherlands Is One Step Closer to Banning Burqa in Public Places