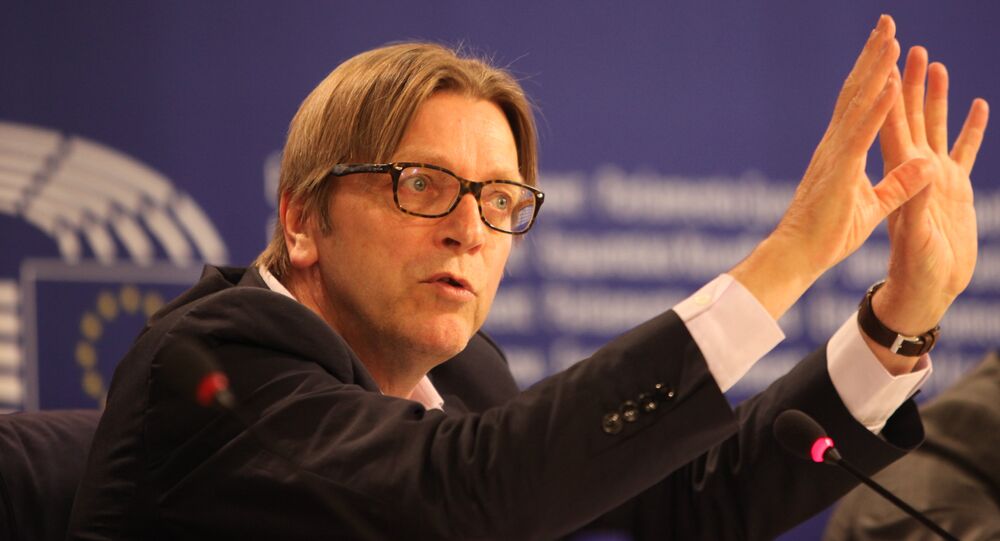 The fact that former Belgian Prime Minister Guy Verhosfstadt - who now leads the Liberals and Democrats Group in the European Parliament - is the lead negotiator on Brexit is significant, both for Britain and for the EU, on many levels.

© AFP 2020 / NICOLAS MAETERLINCK
CETA: EU-Canada Trade Deal on the Rocks as Belgium PM Michel Confirms Wallonia Veto
Verhofstadt is a Europhile well acquainted with the ways and means of the European Union and all its warts and wherefores. As PM of Belgium, he presided over a country with a national parliament and a raft of regional parliaments, each of which were staunchly Flemish, French, part-German or a mix of all.

Belgium it was that gave Brussels a major diplomatic headache when it refused to ratify the controversial Comprehensive Economic and Trade Agreement (CETA) trade deal between the EU and Canada, causing the postponement — at the last minute — of Canadian PM Justin Trudeau's flight to Europe to sign the deal. Verhoftsadt knows something about the 'naughty boys' of Europe.

He has called for a "drastic" reformation of the EU, with a single foreign minister, a single finance minister, a budget wholly overseen by the parliament and "real fiscal capacity" — by which he means: "stop lying about the viability a single currency without substantial fiscal commonality".

Happy with approval of my report setting out proposals to reform EU. It's the first step towards reforming Europe https://t.co/Pm7Gai4eJs

​But he is a pragmatist. He wants a common trading union and will not give up on the four freedoms — the movement of people, goods, services and capital. He hates the idea of 'Europe a la carte' — countries dipping in and out of benefits obligations of EU membership at will. He also knows the other 'naughty boy' of Europe — Britain — has a problem with that.

© Flickr / ALDE Communication
Belgium's Verhofstadt Promotes Plan for New Europe Amid EU Crises
Any deal with the EU will have to balance the UK's desire to access the single market with its lack of desire to allow unfettered immigration — it "wants its borders back", as the saying goes. The reality is that the UK needs foreign workers — EU citizens or not — for many of its economic sectors — healthcare, transport, hospitality and agriculture, to name but a few.

Step forward the clever Guy Verhofstadt, who has fast-forwarded the proposition of "associate citizenship" for the Brits. It allows enough 'elbow room' to allow for the free movement of associates as well as full citizens (of other EU states) to live and work across the EU, as well as a vote in European Parliament elections. It could work alongside some form of UK scoping of immigrant worker eligibility, while remaining true to the four freedoms. It works for students and young people too.

Verhoftsadt went further than that still — in the summer recess — when he propounded the idea of a two-tier EU: "full membership" and "associate status". Effectively, he is proposing a wholly integrated core — probably the Eurozone states — with huge political and economic integration and politics and a secondary "associate" donut group, who share trade, justice, security and other common values.

Great support for membership up, but EU survival can't be taken for granted. It has to be fought for #IamEuropean https://t.co/ax5M27X5pm pic.twitter.com/3OOxV21WKk

​"The current set up is incomprehensible for Europeans. The current 'Europe a la carte' prevents member states from showing more commitment. If we want to give the Union more direction, we have to go back to the ideas of the founding fathers, who proposed a clear system in which countries have to choose between full membership and associate status," he said.

© REUTERS / Eric Vidal
European Parliament in Last-Ditch Horse Trading Over 'Backroom' Presidency Post
One final level on which to read Verhofstadt. Not only is he the lead Brexit negotiator on behalf of the European Parliament, but he could also be the next president of it. The age-old 'stitch-up' between the European People's Party (EPP) and the Socialists and Democrats (S&D) — whereby they steer the work of the parliament in return for job-sharing the presidency — hangs in the balance.

The 'Brussels bubble' is alive with rumor and counter-rumor over who will take over from the incumbent Martin Schulz. Verhofstadt is playing his cards close to his chest. If he were to stand for the election —January 17, 2017 — and win, things in Europe could become a whole lot more fun.