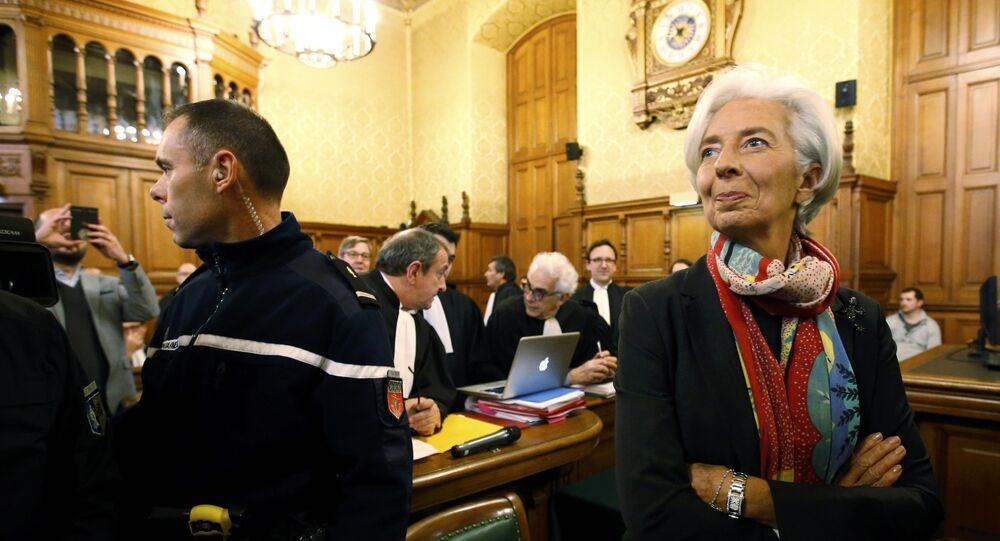 This week saw the start of a weeklong trial for International Monetary Fund Managing Director Christine Lagarde. The influential financer appeared in the dock of a Paris court on Monday. A special tribunal has been charged with determining if she is guilty of fraud in a case dating back to her time as French Finance Minister.

The case involves Lagarde's role in the fraudulent payout of a cool €405 million by the French state to unsavory businessman Bernard Tapie in 2008. Tapie, who had backed then-President Francois Sarkozy's election campaign, was awarded the payout under Lagarde's watch as finance minister after claiming to have been defrauded by a state-owned bank Credit Lyonnais in the 1990s into selling his stake in sports equipment company Adidas.

© REUTERS / Charles Platiau
IMF Chief Lagarde on Trial Over Adidas Sale Payout 'Negligence'
The IMF director is accused of gross negligence over her initial decision to go to arbitration and her failure to challenge the payout. The Tapie payout, well-known in France, caused a public outcry, and a Paris court ordered Tapie to repay the money, with interest, last year.

The scandal has subsequently continued to hang over Lagarde, even after she left the French Finance Ministry to become managing director of the IMF in 2011. Lagarde, recently reelected to the IMF's top job, tried and failed to have the case dismissed last July.

Ms. Lagarde, one of the most powerful women in the world, could face one year in prison and a €15,000 fine if convicted. Most observers and legal experts believe that an actual prison sentence would be unlikely, however, given Lagarde's position at the IMF. Still, the case is sure to negatively affect the image of the international financial institution, particularly if she is convicted.

© CC BY 2.0 / Adam Jones
Kosovo Spent IMF Funds on Pensions for Veterans Now Fighting for Daesh
So far, the IMF has stood by its director, with its board releasing a statement expressing "confidence in Madame Lagarde's…ability to effectively carry out her duties, and that remains the case today."

At Monday's opening hearing, Lagarde stressed that she was "in no way guilty of negligence," adding that she "acted in good faith with only the public interest in mind." A day earlier, speaking on French television, the financier said that "negligence is a non-intentional offense," adding that "we're all negligent at something at one point or another in our lives. I tried to do my work the best I could within the limits of what I knew."

© REUTERS / Charles Platiau
Managing Director of the International Monetary Fund (IMF) Christine Lagarde stands near her lawyer Patrick Maisonneuve (L) before the start of her trial about a state payout in 2008 to a French businessman, at the courts in Paris, France, December 12, 2016.

The trial is expected to run through to next week. On Tuesday, Lagarde will face questioning by the judges involved in the special tribunal, the Cour de Justice, which was established in 1993 to try cases against government ministers. The tribunal consists of three professional judges, and twelve MPs and senators.

Judges are expected to question her regarding her decision to allow for arbitration, despite being repeatedly advised not to do so, and then not waiving the right to challenge its results, suggesting she may have been influenced by President Sarkozy not to do so.

In the run-up to the trial, judges involved in the case stated that the investigation was not just about "carelessness," but about "a conjunction of faults which, by their nature, number and seriousness, exceed…mere negligence."