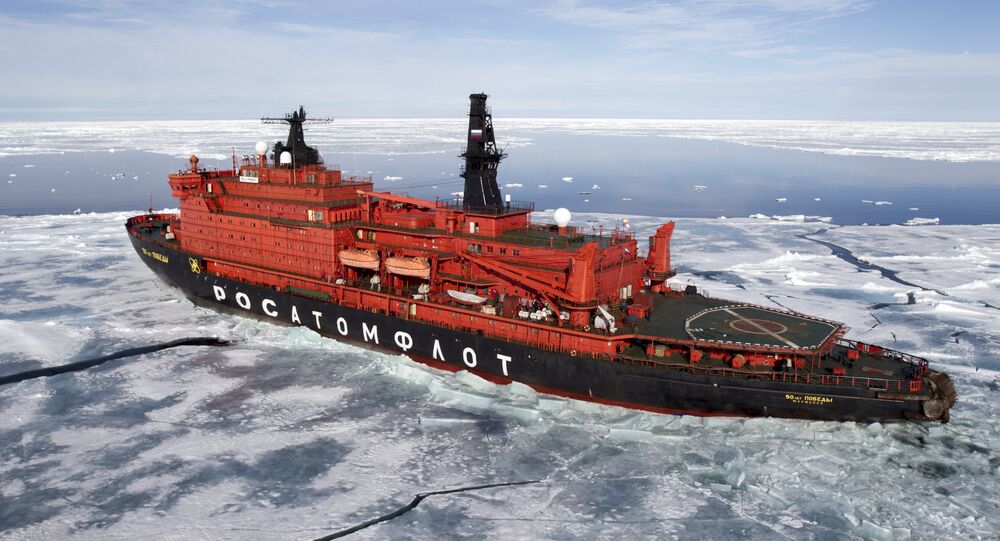 Climate change has intensified the rivalry over the North Pole and the surrounding swaths of resource-rich territory. With five Arctic states vying for control over the promising northernmost domains, it is Russia that is being categorically portrayed as a security hazard with an insatiable appetite for oil-bearing shelf territories.

© Sputnik / Valeriy Melnikov
Denmark Afraid of Russia's 'Iron Fist' in Arctic Resource Game
However, Russia is hardly a threat to its fellow Arctic states, because it is already the dominant power in the Arctic Ocean by virtue of its long coastline and its vast economic activity there, Ingemar Oldberg, an associate researcher at the Swedish Institute for International Affairs (UI) claimed in her opinion piece in Utrikesmagasinet magazine.

According to Oldberg, Russia's presence in the Arctic is already strongest in terms of defense. The Russian Northern Fleet, based on the Kola Peninsula, is being enhanced with top-end strategic nuclear-powered submarines and new units specifically adapted to the harsh Arctic climate. Additionally, new permanent bases are being built, and Soviet-era bases are being re-established along the country's entire 4,300 thousand-mile-long Arctic coast, including Franz Josef Land and the New Siberian islands.

​However, Russia has earned a reputation for being peaceful over the decades, and predisposed towards finding diplomatic solutions to conflicts in the region. Norway and Russia have cooperated on fishing quotas in the Barents Sea since the 1970s, which resulted in stable stocks. A new agreement was signed in October 2016. In 2010, a landmark agreement on the division of the Barents Sea and energy cooperation was signed after decades of negotiation. The parties have common interests in the energy sector due to cross-border deposits and the need for cooperation in developing deep-sea technology.

© Wikipedia / US Army
Greenland's Glaciers Uncover Secret Cold War US Base With Tons of Toxic Waste
Additionally, Russia would like to benefit from international cooperation on maintaining the Northern Sea Route by promoting commercial navigation and making the route more attractive for traffic to and from East Asia. In particular, China has shown a keen interest in investment and transport in the region.

In recent years, the relations between Russia and its Arctic neighbors have been hampered by the West's sanctions. For instance, NATO member state Norway, which eagerly joined the EU and US in placing political and economic pressure on Russia, suffered from counter-sanctions: Norwegian food exports to Russia fell by over 70 percent in 2015. Instead, the Faroe Islands, which are part of the Danish Realm yet enjoy a special status within the EU, greatly increased exports to Russia due to non-participation in the sanctions policy.

​Despite increased tension, Russia has continued to cooperate with the West in Arctic organizations, which do not deal with military matters. In the autumn of 2015, Russia chaired the Barents Euro-Arctic Council (BEAC) for two years, announcing trust, security, transparency and openness as its main priorities. Through BEAC, some of the contacts with the Nordic countries were preserved, which resulted in continued economic and environmental cooperation despite mutual coolness.

© AP Photo / Brennan Linsley
Denmark Stakes on Drones and Greenlanders to Back its Arctic Claims
Of still greater importance is the cooperation within the Arctic Council, which in addition to the Nordic countries and a host of observers also includes the US and Canada. In 2011, a binding milestone agreement on search and rescue cooperation, as well as the joint elimination of oil spills was signed. Despite different views on Crimea's re-unification with Russia, cooperation continued when Canada and the US held the organization's presidency; it placed special focus on the environment and research, and Russia contributed with project money.

Unlike, say, the US, Russia has ratified the UN Law of the Sea Convention (UNCLOS). Russia made its first application for 1.2 million square kilometers already in 2001, claiming Lomonosov and Mendeleyev ridges to be offshoots of the Siberian continental shelf. In 2015, the Russian application was backed up with seismic tests, ground examinations and other scientific data. The problem is that Denmark and Canada also filed claims which overlap with Russia's. Whereas the Commission on the Limits of the Continental Shelf (CLCS) only decides on the extension of continental shelves, the conflicting claims must be resolved by the rivaling countries themselves.

Nobel Prize Winner to Sputnik: Alternative Energy is a 'Way Forward' for Arctic