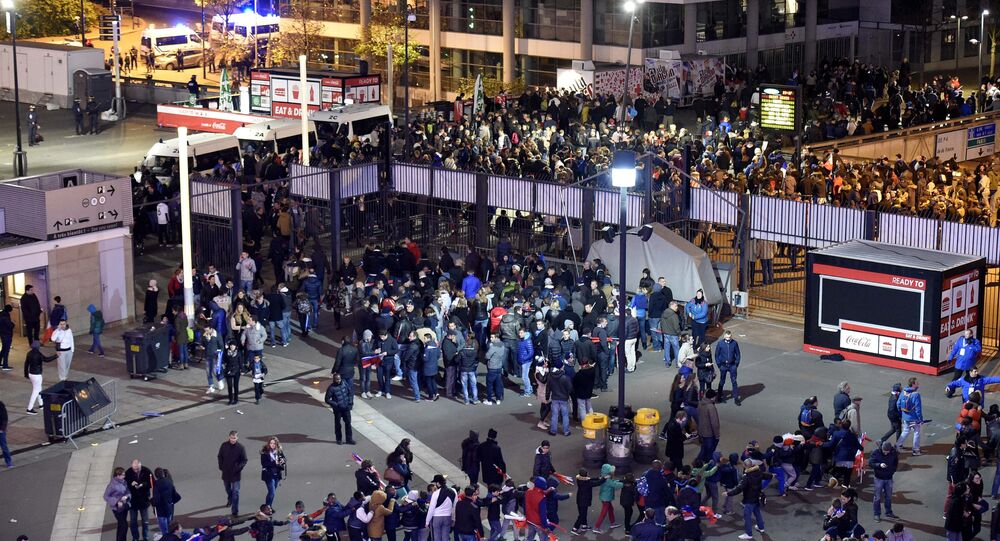 A couple in France who had fraudulently demanded compensation from France's Guarantee Fund for Victims of Terror Acts have been handed heavy sentences of three and six years respectively, France's 20 Minutes reported.

© AFP 2020 / PATRICK BAZ
Anti-Daesh Coalition Loses Key French Aircraft Carrier to Maintenance
A couple in France has been jailed after they pretended to be victims of terrorist attacks in order to claim compensation, France's 20 Minutes reported.

The couple filed a false report that they were in the Stade de France in the evening of November 13, 2015, when a group of gunmen and suicide bombers killed 130 people and injured hundreds more in a series of terror attacks in Paris.

As a result of their false report, they received 30,000 euros ($31,700) each from France's Guarantee Fund for Victims of Terror Acts (FGTI).

The woman, 29-year-old 'Isabelle V.', admitted her guilt during police questioning, while 36-year-old 'Alexander D.' confessed to the crime in court.

They told the court they'd used the 60,000 euros to repay debts following "death threats" from creditors. The couple also used the money to pay for treats for their two children and buy vehicles for Alexander's car dealing firm, the woman told the court.

"They are scavengers of public support, predators who profit from the misery of others," declared the public prosecutor in the criminal court in Grasse, near Cannes.

Prosecutors had called for the pair to receive sentences of 30 months and five years respectively. The court toughened the recommended sentences, sending them to jail for three years and six years respectively, a "particularly strict application of the law" that the court said will serve as "an example" to others.

Alexandre Julien, who led the tribunal, commented that the defendants had made vivid claims about their experience in order to ensure the success of their bogus compensation claim.

"You (addressing Isabelle V.), described in particular that you saw 'bodies flying' at the time of the explosion," Julien said.

The couple's lies were exposed after they made another claim to the FGTI after the Nice terror attack in July, claiming to have been on the Promenade des Anglais at the time of the attack.

The fund became suspicious and called the police, who analyzed their mobile phone records and discovered that on November 13, 2015 they had actually been in the Mediterranean resort town of Antibes.

© AP Photo / Jacques Brinon
See No Evil: Belgian Police Ignored Information Which Could Have Been Used to Stop Paris Attacks
FGTI lawyer Roland Rodriguez said that "these example sentences are likely to deter" others from making similarly false claims about being terror attack victims.

The two weren't the first false claimants to come forward in the aftermath of the wave of terror attacks which have hit France.

On November 21, a 24-year-old woman was sentenced to one year in prison for fraud, after falsely reporting that she had been the victim of a terror attack at the Carillon bar on November 13, where 15 people were murdered.

On July 13 a 31-year-old woman was given a six-month suspended sentence by a Bobigny criminal court for making a false claim she was at the Bataclan theater on November 13, after which she received 10,000 euros compensation from the FGTI.