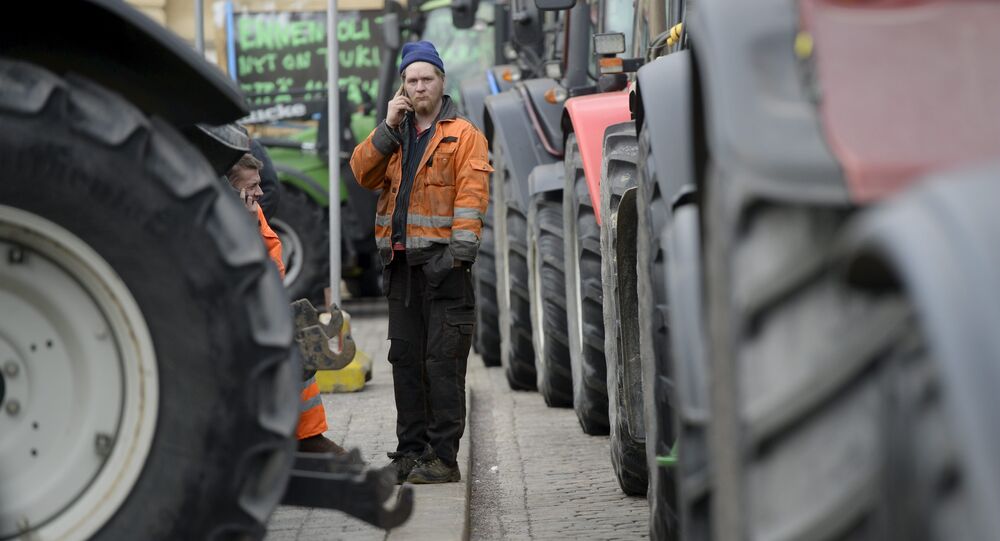 Anti-Russian sanctions and Russian counter sanctions have cost the EU seven times more export income than the US, Denmark's Jyllands-Posten reported on Friday.

© AP Photo / Alexander Zemlianichenko
EU 'Should Follow Trump's Example' Regarding Plans to Lift Anti-Russian Sanctions
If indirect consequences of sanctions, such as contributing to an economic downturn in Russia and the fall in the ruble's value are taken into account, Europe has lost 11 times more income than the US.

Jyllands-Posten referred to EU figures published last year which showed that sanctions and Russian counter-sanctions caused EU exports to Russia to fall by 5.1 billion euros, in comparison with 715 million dollars in losses suffered by the US.

Andrew Weiss, vice-president for studies at the Carnegie Endowment for International Peace, told the newspaper that pressure from Washington is integral to maintaining sanctions, given the EU's divisions.

"The US is the glue holding everything together. It is supporting the EU's commitment to continue sanctions, and without it the unity would look really pitiful," Weiss said.

Sanctions against Russia were first imposed by the US and EU in March 2014, following Crimea's decision to secede from Ukraine and join the Russian Federation in the aftermath of the Maidan coup d'etat.

Manufacturers in Germany and agricultural producers in Italy, Poland and France have spoken out about the losses they have incurred as a result of sanctions.

In May manufacturers in the German town of Chemnitz called anti-Russian sanctions as "shooting ourselves in the foot," and announced plans to further localize production in Russia in order to comply with Russian import substitution law.

The impact on some German states has been substantial. In September IHK Nord, an association of 12 Chambers of Commerce from five northern German states, reported that the state of Bremen has been most affected by the EU's sanctions against Russia, and Russia's counter-sanctions.

While total German exports to Russia declined by 37 percent since 2014, in the five north German states the drop was 47 percent.

This summer Italy's Coldiretti farmer's confederation, the largest agricultural organization in Italy and Europe, reported that the loss to Italy's farmers caused by the Russian food embargo has reached 600 million euros.

In June Coldiretti co-organized a rally of some 10,000 representatives of the agricultural sector gathered in the Italian city of Verona, located in northern region of Veneto, to protest against Brussels' prolongation of the anti-Russian sanctions.

Popular protest has been echoed by some politicians in Italy, who have called for an end to sanctions.

Italian MP Paola Carinelli from the Five Star Movement said that Italy has borne billions of Euros in losses as a result of sanctions.

"We have lost as much as €7 billion from the beginning of sanctions. The number of lost jobs could reach 200,000," Carinelli said at a news conference in Moscow, as quoted by RIA Novosti.

"It is true that they are not effective," Vanhanen told a European Conservatives and Reformists Group Alliance conference.

"But when they exist, you have to follow them… It is a common European policy and we support it."

Last autumn Finland's Central Union of Agricultural Producers (MTK) stated that Finnish farmers had suffered losses of around 400 million euros ($440 million) as a result of Russian counter-sanctions, half of which was borne by daily producers.

In 2015 Finnish exports to Russia fell by 32 percent, to 3.6 billion euros ($4 billion), and according to figures for April from Finland's Customs Service, exports decreased by 11 percent in comparison with April 2015.

Russian Agriculture Not to Suffer if Western Sanctions Lifted - Minister