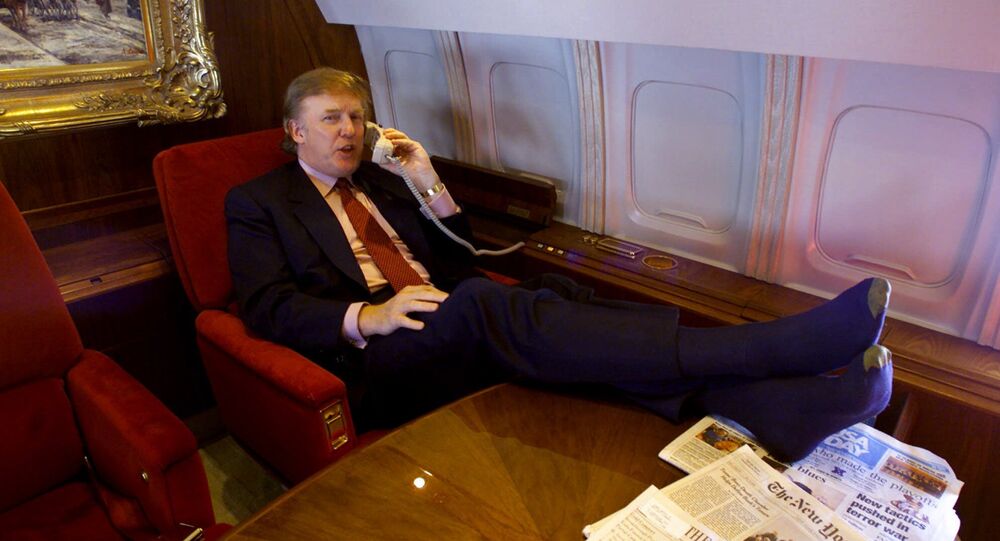 Economy, gender equality, migration and counter-terrorism - everything is expected to get worse with Donald Trump in the White House, according to an analysis by Swedish Foreign Ministry that the Swedish tabloid newspaper Expressen got their hands on.

© AFP 2021 / TT NEWS AGENCY / PONTUS LUNDAHL
Trump's Presidency Prompts Sweden to Arm Itself, Eye NATO
The way the Swedish Foreign Ministry sees things, US President-elect's intent to "make America great again" will be made good at the expense of other countries. Donald Trump's protectionist ambition to prioritize America at all times implies a deterioration of conditions for cooperation in virtually all areas. In some of them, such as security, defense and climate, the prospects for future cooperation are expected to be overshadowed by "considerable uncertainty." Additionally, Sweden is expected to take a more defensive stance with Trump at the American wheel.

According to the analysis, Donald Trump's presidency is expected to offer fewer cooperation opportunities in all areas, such as the battle against terrorism, security, defense, climate, energy, development and last but not least even handling the migrant crisis.

"With Trump as president, Swedish policy will be limited to a defensive agenda rather than development," the secret analysis by the Foreign Ministry said.

© REUTERS / Mike Segar
Norway Fears Trump's Protectionism Will Stir New Migrant Flows
Sweden was particularly worried by Trump's repeated expressions of sympathy for Vladimir Putin as well as his alleged willingness to abolish sanctions against Russia and recognize Crimea as Russian territory. In contrast to Sweden's "feminist" government, which considerably soured its relations with Israel by acknowledging Palestine, Trump fully supports Israel and would like to recognize Jerusalem as the capital city of Israel.

The secret document called "Analysis and Action Plan: Sweden's Cooperation with the US After the Elections on Nov. 8, 2016" was compiled shortly before the US presidential election and was initially only distributed to PM Stefan Löfven, state secretary Hans Dahlgren, as well as Green Party spokespersons Gustav Fridolin and Isabella Lövin. Today, it is well-known in the Swedish government headquarters in Rosenbad.

In addition to finding that conditions for cooperation between Sweden and the US deteriorated considerably, the action plan also provided Stefan Löfven with practical advice on how he should act during the "transition period" until Trump gets sworn in on January 20 next year.

"A US under a Trump administration is not likely to be a global player with an agenda similar to ours [Swedish]. Nevertheless, the US remains an important partner," the action plan said.

© AP Photo / Jae C. Hong
Scandinavians Scared Trump's Triumph Spurs 'Russian Resurgence'
At present, the future of free trade and security remain the most burning issues for Sweden. As to economic cooperation, Stefan Löfven stressed the fact that the Swedish industry provided some 300,000 jobs across America.

Additionally, Trump's threats to throttle US military support to NATO member states and non-aligned states on the US bandwagon have re-kindled Sweden's chronic fears of a Russian "invasion," provoking polarized reactions in the Swedish establishment. Whereas Conservative MEP Gunnar Hökmark called for an urgent 35 billion SEK (roughly $4bln) allocation to boost Sweden's defense against Russia and Conservative defense spokesman Hans Wallmark openly advocated for Sweden's NATO membership, newspaper Folkbladet's columnist Jonas Bergström urged his country to stick to its time-tested non-alignment policy, which for decades allowed neutral Sweden to be an important voice for peace and disarmament. According to Bergström, throwing away 200 years of successful security policy in order to join an alliance with Trump and 'semi-dictator' Erdogan will not make Sweden safer.