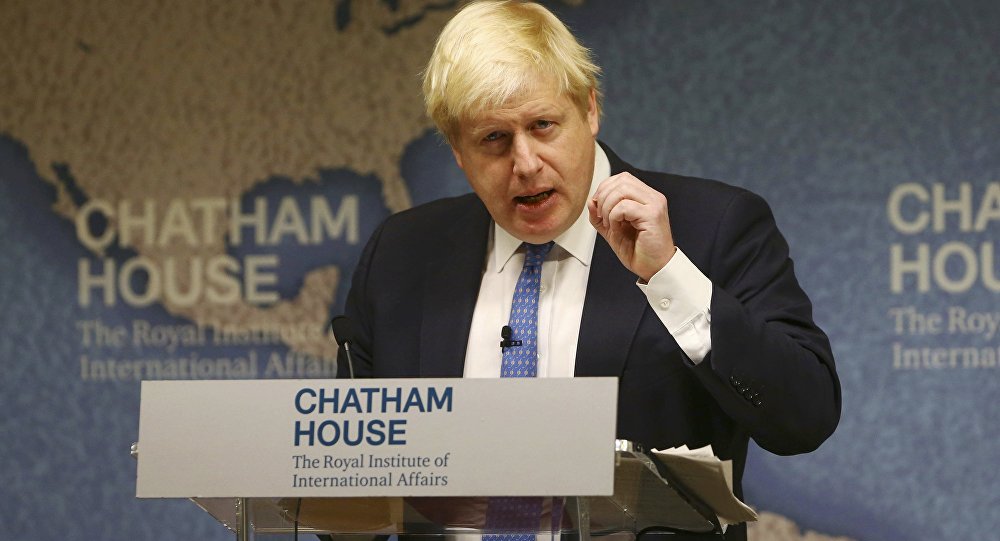 UK Foreign Secretary Boris Johnson has said the UK will redefine its role in the world, after leaving the European Union, by becoming a 'global Britain' in trade and a major player in NATO, backing US president-elect Donald Trump's calls for Europe to pay its way within the alliance.

© AFP 2019 / Robyn Beck
Trump Says NATO 'Obsolete', US Paying Too Much for Joint Defense
In the first major set-piece speech since becoming foreign secretary, at the Royal Institute of International Affairs at Chatham House in London, Johnson made it clear he would support a stronger European Union, with Britain being a major player, despite the decision — by a referendum, June 2016 — to leave the EU.

He said Britain would be a staunch supporter of NATO, backing calls by Trump that European member states should pay their way. "At the heart of this institution — NATO, the most durable and successful defense alliance in history — lies the security guarantee contained in the North Atlantic Treaty Article 5, that an attack on any one member shall be considered an attack against them all.

"And in offering that guarantee, president-elect Donald Trump has a point. It cannot be justified that one NATO ally, [the US], accounts for about 70% of the alliance's defense spending while the other 27 countries manage only 30% between them," Johnson said.

Trump has made clear he believes that Europe is not pulling its weight within the alliance and has questioned why the US pays so much into an organization he described in March as "obsolete". He told reporters during his campaign that he rejected the idea that the US should be "the world's policeman".

"I want every NATO member to meet the agreed target of spending 2% of GDP on defense, and 20% of their defense budget on new equipment. Britain already abides by this target and I note that NATO's most exposed members — including Estonia and Poland — do so as well," Johnson said.

We are a global Britain running a global foreign policy. — @BorisJohnson @foreignoffice #CHevents

On Brexit, Johnson said that he would see Britain as returning to becoming a global trader: "A nation taking back control of its democratic institutions [is] not a nation that is "turning in on itself, pulling up the drawbridge or slamming the door".

"It is a country that refuses to be defined by this decision, a country galvanized by new possibilities and a country that is politically, economically, morally feted to be more outward looking and more engaged with the world than ever before.

I set out my vision for Global Britain @ChathamHouse this morning. I believe this country is a force for the good: https://t.co/SaDRfgK7wa pic.twitter.com/21XR5eeiss

"Like it not, we are not some bit-part or spear-carrier on the world stage. We are a protagonist, a global Britain running a truly global foreign policy. And my message to your today is that this global approach is in the interests both of Britain and the world," he said.