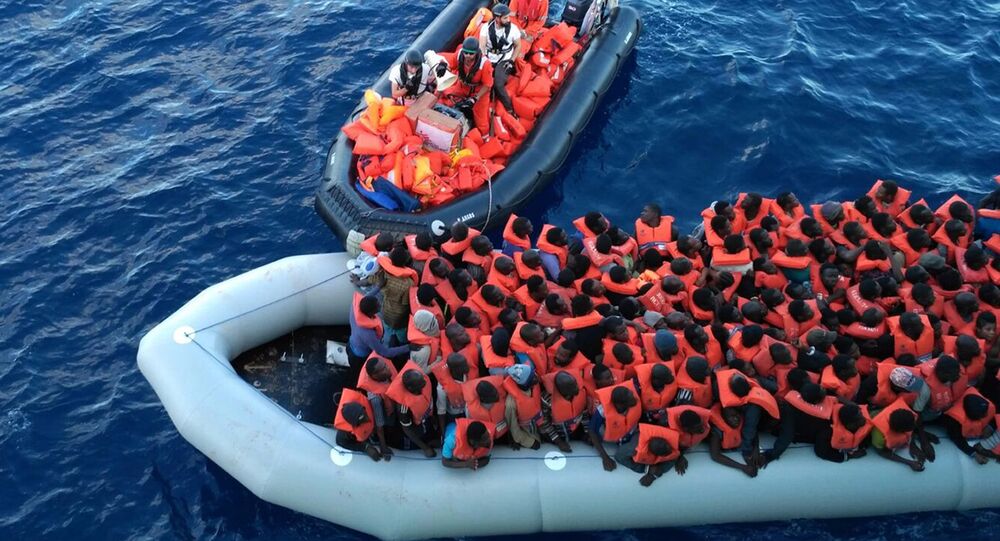 Denmark and Germany are preparing a decisive plan to stop illegal immigrants who cross the Mediterranean. The two Baltic Sea nations seem to have taken cue from Australia and are advocating for the newcomers to be sent to a third party state, where their application would be considered.

© AP Photo / US Coast Guard
US Coast Guard: Over 100 Migrants Returned to Cuba in Past 10 Days
The somewhat unorthodox solution is being promoted by German Interior Minister Thomas de Maiziere and Danish Immigration and Integration Minister Inger Støjberg, Swedish news outlet Fria Tider reported. The plan bears clear similarities with Australia's so-called Pacific solution, which is said to shield the country from unwanted guests, despite being labelled as downright "draconian." The difference, though, from Australia, which explicitly banned asylum-seekers in boats from ever entering the country, is that the EU nations are ready to potentially open their borders for those refugees who have their applications accepted.

"It is the government's clear commitment to relieve the pressure on Europe's external frontiers, at the same time making life as hard as possible for traffickers," Inger Støjberg told Danish daily Berlingske.

"I believe that Denmark as a country must join in this here and see whether can coordinate the effort to get it through the EU," Danish People's Party spokesman Martin Henriksen told Berlingske.

© REUTERS / Mike Segar
Norway Fears Trump's Protectionism Will Stir New Migrant Flows
According to Berlingske, Egypt and Tunisia, both Maghreb countries which are popular travel destinations for thousands of Westerners, are regarded as hot candidates for building accommodation centers for where asylum applications will also be processed. This idea bears striking similarities to Australia's offshore processing centers in the Republic of Nauru and Manus Island, Papua New Guinea.

At the same time, the two countries have modest refugee support and maintain harsh penalties for violent crime, which makes them a less desired destination for Arabs fleeing Iraq or Syria than the famously lenient EU nations.

The idea is that Western support will dissuade potential customers from using human smugglers in search of a more comfortable life.

At present, the Mediterranean Sea remains an extremely popular refugee route, even if the current has subsided compared with last year's peak figures.

© Photo : Pixabay
Sweden to Expect Surge in Jihadi Turncoats Posing as Refugees
According to the Missing Migrants portal, 348,664 migrants and refugees entered Europe by sea in 2016 as of November 29, arriving mostly in Greece and Italy. At the same time, 4,690 people were reported drowned.

However, the stream of asylum-seekers may bounce back, as Turkish President Recep Tayyip Erdogan in late November threatened to re-open the Turkish border with the European Union for Syrian refugees as a counterpunch to the European Parliament's decision to freeze EU membership negotiations with Turkey.

At present, it is almost impossible to predict how many of the roughly 3 million Syrian refugees would begin their trek westwards if Erdogan carried out his threat to "open the gates." One of the reasons why last year's flow of refugees dried up is that the so-called Balkan route was closed though re-introduction of border controls. In Greece alone, there are tens of thousands of refugees who cannot get anywhere.