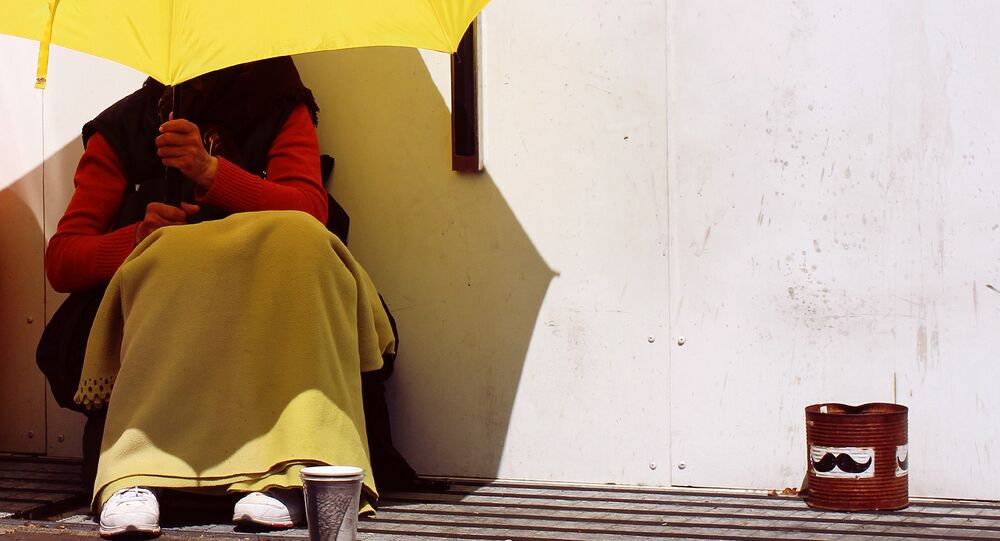 The growing gap between the strata of society and the recent migrant crisis have both been gnawing at the ends of the Swedish welfare system. A token of this is the growing homelessness.

© AFP 2021 / JONATHAN NACKSTRAND
There's No Place Like Home: 'New Swedes' to Move Into Cities of Their Own
The number of homeless people seeking help from the charity organization Stadsmissionen ("City Mission") around Sweden has been growing at an alarming rate. In the last five years, the number of visits to City Mission's center in Stockholm has increased by 50 percent in Stockholm alone. Remarkably, the center personnel is constantly seeing previously unfamiliar customers, as larger population groups become increasingly vulnerable.

"We've witnessed the increase for the past five years and have seen more families with children living in homelessness. We can also see more elderly people, who happen to fall between the cracks of homelessness because of low pensions," Marika Markovits, director of Stockholm City Mission told Swedish Radio.

Despite the fact that no national statistics on the number of homeless people in Sweden have been produced since 2011, a simple comparison of local statistics with the data from City Mission in Sweden leaves no reasonable doubt, Marika Markovits pointed out.

© AP Photo / Santi Palacios
Refugee Women Shut Themselves Away to Avoid Harassment in Sweden
"City Missions have ended up in a position, where we receive many more people at a time when it becomes increasingly difficult to ensure a shelter for everyone," Markovits said. "It is a different Sweden we see today," Markovits summed up.

At the Stockholm City Mission emergency accommodation, one in each ten bunks is reserved for women.

"You need to stay tough, otherwise you will go under. Drugs, bad company or diseases become your downfall. Living on the street is not exactly healthy," Inger Larsson of City Mission told Swedish Radio.

Meanwhile, Swedish municipalities, the majority of which already suffer from a severe housing shortage, are coming under increased pressure in the aftermath of last year's migrant crisis. In 2015, Sweden took in a record 163,000 asylum-seekers. In 2016, around 70,000 were granted residence permits and are to be distributed among the country's 290 municipalities, 240 of which are already experiencing housing shortage. According to previous estimates, Sweden, a nation of roughly 10 million, will need 710,000 new homes by 2025.

© Photo : Pixabay
Sweden to Expect Surge in Jihadi Turncoats Posing as Refugees
Whereas Employment Minister Ylva Johansson acknowledged the severe lack of housing, she also made it clear that municipalities which try to evade their responsibilities to house their share of migrants will be severely punished, Swedish daily Svenska Dagbladet reported. Johansson took special pride in the fact that Sweden is about to accommodate more refugees than ever before. Meanwhile, Finnish national broadcaster Yle predicted that the number of "paperless" immigrants in the neighbor country is about to grow by tens of thousands in lockstep with the number of refusals.

Sometimes, however, municipalities resort to odd solutions to evade penalty and work against the lack of housing. Stockholm City decided earlier this week to procure hotels for migrant accommodation. The initiative is believed to cost the city up to 40 million SEK ($4.5mln) worth of tax money, Swedish economic newspaper Dagens Industri reported.

© Flickr / Ulf Liljankoski
House Rules: Sweden Poised to Punish Municipalities for Snubbing Immigrants
Previously, asylum-seekers were lodged in everything from tent camps to schools and barracks. The decision to accommodate the newcomers in luxury hotels spurred criticism.

"I believe it is unfortunate to choose such an expensive accommodation solution. Besides, this is bad for both tax-payers and integration," Christian Democrat group leader Erik Slottner told Dagens Industri.