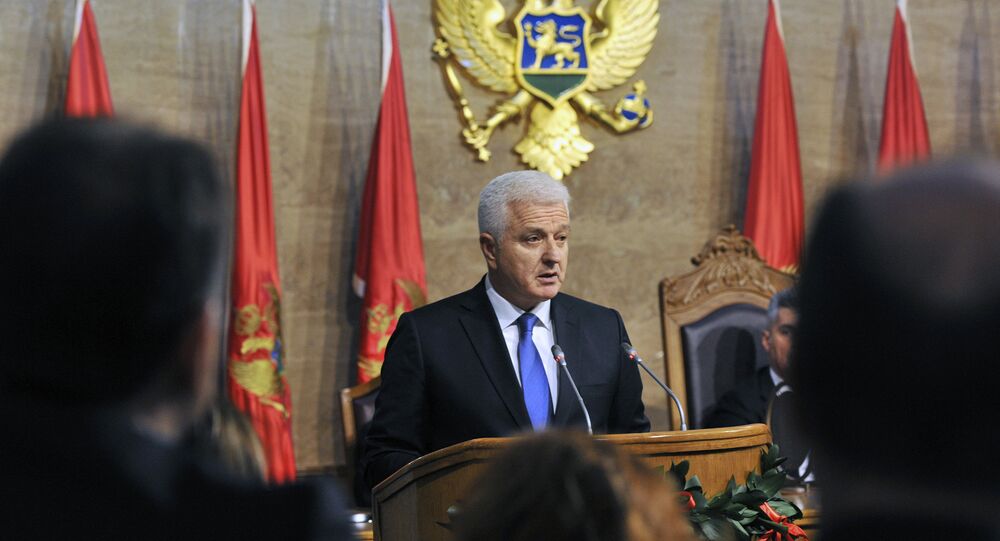 Newly-appointed Prime Minister of Montenegro Dusko Markovic said that his government will try to complete the country’s accession to NATO and "overcome misunderstandings in relations with its historic ally Russia."

© AFP 2021 / SAVO PRELEVIC
Montenegro Election Coup Claim is 'Excuse to Arrest Opponents of NATO Accession'
In turn, Russian Foreign Ministry Spokesperson Maria Zakharova underscored that Moscow is open to constructive dialogue with all partners, including Podgorica. She added that Russia expects practical steps by the Montenegrin government to ease tensions in bilateral ties.

Dusko Markovic is a former intelligence chief and a close ally to former Prime Minister Milo Djukanovic who has been an avid supporter of Montenegro’s membership of NATO.

Until recently, Djukanovic ruled Montenegro since the early-1990s and has contributed a lot to deepening tensions between Podgorica and Moscow. Djukanovic called for NATO to accelerate the procedure of Montenegro’s accession to the military bloc due to the Ukrainian crisis.

Djukanovic is the leader of the Democratic Party of Socialists of Montenegro which won the recent parliamentary election on October 16.

© Flickr / Justin van Dyke
Kremlin Denies Allegations of 'Russian Nationalists' Coup Plot in Montenegro
During the campaign, he insisted that the vote would be a choice between the West and becoming a "Russian colony."

The vote was shadowed by allegation of a coup attempt foiled on the election day and an assassination attempt against Djukanovic. Prosecutors have accused "nationalists from Russia" of being behind the alleged plot.

In turn, the Kremlin rebuffed the allegations, saying that Russia played no role in the alleged coup plot and assassination attempt.

Ahead of the election, Djukanovis also accused some opposition groups of receiving funds from Russia.

© AFP 2021 / WAKIL KOHSAR
Montenegro to Join NATO Within Several Months – Prime Minister
New Prime Minister Markovic is considered to be a protégé of Djukanovis who still has leverage to influence the policy of the Montenegrin government. However, Markovic is likely to apply a political course aimed at both NATO and Russia.

To a great extent, the future of relations between Russia and Montenegro depends on whether Podgorica will withdraw from anti-Russian sanctions or not, according to Pavel Kandel, a research fellow at the Institute for European Studies of the Russian Academy of Sciences.

"Until Podgorica takes concrete steps towards Russia, all these statements by the government are just rhetoric aimed to win support of pro-Russian voters," he said in an interview with Sputnik Serbia.

The expert said that Podgorica needs to make a "symbolic gesture" to indicate that it really wants normalization with Moscow.

He added that currently there are certain obstacles complicating Russia-Montenegro normalization.

© REUTERS / Francois Lenoir
NATO Chief Welcomes Open Investigation Into Montenegrin Coup Attempt
"Moscow’s stance on the expansion of NATO is well-known. At the same time, Montenegro will continue its pro-NATO policy," he said.

Moreover, normalization will depend on the situation with the attempted coup and alleged involvement of "Russian nationals" in it. Currently, the opposition is boycotting the parliament, demanding evidence of the coup.

"The boycott is not good for the reputation of the government, so the government may try to settle the issue. At the same time, the government cannot abandon this conspiracy theory because this would compromise them," Kandel said.

"He accused Russia of interfering with the election and provided no evidence to support his accusation. He also accused Russia of being behind the attempted coup. That’s all a lie. And how can this man talk about normalization with Russia?" Knezevic told Sputnik Serbia.