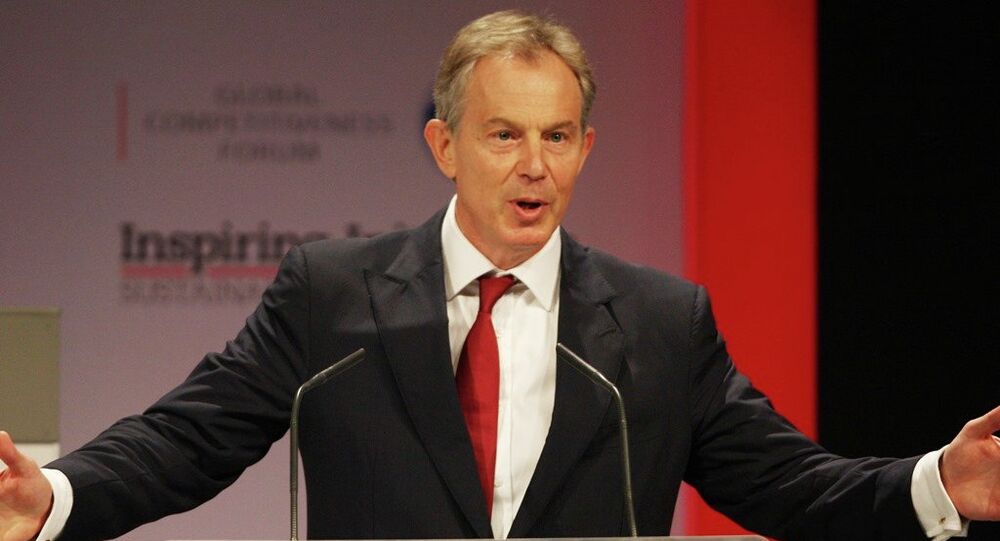 Former UK Prime Minister Tony Blair could be stripped of his membership of Britain’s privy council and face other "severe" consequences, a UK MP has told Sputnik, amid a push from lawmakers to launch a fresh investigation into Blair’s role in Britain’s 2003 invasion of Iraq.

The former PM's actions in the lead-up to the Iraq war have once again been in the spotlight, with a cross-party campaign calling for a parliamentary committee to be established to investigate any discrepancies between public and private comments made by Blair in relation to the Iraq conflict.

As part of the push, lawmakers want to look at Blair's answers to the Chilcot investigation into the Iraq war, as well as private conversations and assurances given to former US President George W. Bush.

​"We've been trying to get this matter resolved for many many years. The Iraq war was over 12 years ago… and there has been a very long investigation into the matter, with the [Chilcot] report eventually published in July," Plaid Cymru MP for Arfon, Hywel Williams, told Sputnik.

Williams called for the creation of a committee to "look at what Mr Blair said in public, what he said in private to the United States president," and even investigate "the more careful things that he said to the House of Commons."

​"There is a divergence there. There were papers released under a Freedom of Information (FoI) request last week, which clearly showed, as one can see, that he's saying one thing to one audience and another thing to another audience."

'Blair Could be Booted From Privy Council'

While Blair has been more vocal about UK affairs following Britain's decision to leave the EU, with the former PM hinting at a tilt back into mainstream politics, Williams says an investigation into the former prime minister — which has the support of lawmakers from seven different parties — could lead to "severe" consequences.

​"We think that we have a very strong case indeed," he said, pointing out that Blair could possibly be stripped of his membership of the exclusive privy council, which provides high ranking political and defense officials with sensitive information key to the national interest.

"The consequences for Mr Blair might be quite severe. He is a member of the privy council, which is a group of people who receive information on a privileged basis, and he might possibly… lose his membership of that privy council and that would be a symbolic blow and possibly a practical blow as well. I think it's something that might happen."

Williams also raised frustrations at the scope of this year's long-awaited Chilcot report, which while heavily criticizing Blair, didn't hold him personally to account for leading British military intervention in Iraq.

Same day released papers show Chilcot Inquiry was deliberately set up to deflect blame, it is announced Blair is to return to politics

​"In these papers released under the Freedom of Information request, one can see that senior figures in the government at the time the Chilcot inquiry was set up, were very concerned that individuals should not be held to account," he said.

"Now given that it was the prime minister [Blair] and his intimate circle who were making those decisions, we think really he must be brought before a committee of the House to give an account of himself, and to be held to account personally. It was he who took the decisions, it was he who ran the very informal style of government, what some people called ‘sofa government' — very informal without proper notes being taken. I think he should be held to account personally."

Not sure how Tony Blair can lead an investigation into the demise of centre-politics when he's contributed towards it.

​Lawmakers will debate and discuss the proposals on Wednesday (November 30), with the government and opposition Labour party under pressure to back any motion put forward on the matter.

Tony Blair: I Could Save Britain From a 'One-Party State'