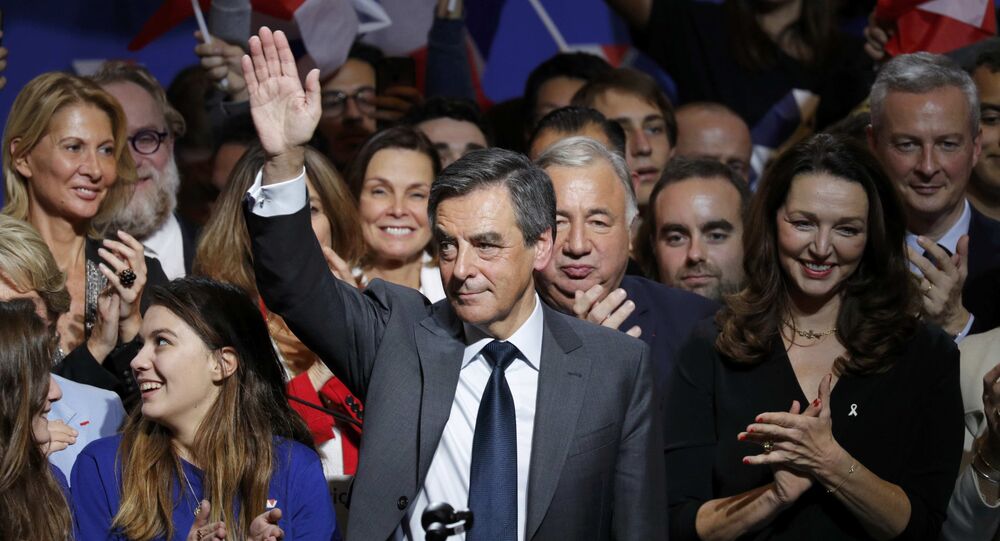 Things That Can Prevent Fillon From Becoming France's Next President

France’s former Prime Minister Francois Fillon, labeled "the most pro-Russian candidate" by local media for his views on French foreign policy, won the nomination of center-right Republicans party with 66 percent of votes, way ahead of his main rival - Bordeaux Mayor Alain Juppe.

© AFP 2020 / MARTIN BUREAU
Fillon Owes Victory to Voters Desire for More Right-Wing Candidates - Lawmaker
Dmitry Abzalov, president of the Center of Strategic Communications in Moscow, believes that Alain Juppe overestimated his chances and that his softer stand on international and domestic policy issues convinced voters that his policy would change little from what has so far been done by the Socialist government.

That’s why they voted for Fillon, whose sharp criticism of President Holland appealed to them more.

Another mistake Juppe made was his stake on party primaries where only Republican supporters normally vote in.

In reality, many people from across the political spectrum – from left-wingers to Socialists to rightwing pro-Marine Le Pen radicals turned out — nearly 4 million in all compared to an estimated 2.6 million The Republicans expected to see at the polling stations.

Both republican candidates Juppe and Fillon have called for a change in the country's foreign policy in the wake of the unsuccessful presidency of Socialist Party leader Francois Hollande.

They stressed the necessity to conduct pension and labor reforms as well as to reduce public expenditure among the others.

However, Francois Fillon wants to go even further promising to sack half a million of the country’s 6.5 million army of public servants within the next five years and to switch to a 39-hour work week from 35 hours now without any wage hikes to boot.

He argues that with the country in crisis everyone should do their part to make things better.

He also wants to bring the value added tax up to 22 percent from 20 percent now and slash state spending by 110 million euros.

Moreover, Fillon has supported an approach on the foreign policy which seriously contradicts the current Paris policies. In particular, he has called for resuming ties with Syrian President Bashar Assad to fight Daesh, and for cooperation with Russia in fighting international terrorism.

Even though he never questions France’s strategic alliance with the United States, Francois Fillon dismisses President Hollande’s policy towards Russia as “absurdist” and “failed,” insisting on lifting the anti-Russian sanctions and blaming Kiev for the non-implementation of the Minsk accords.

As for Alain Juppe, he insists on unseating President Assad and on forcing Russia to implement the Minsk accords. He also says he will never recognize Crimea as part of Russia.

“There were more people taking part in the primaries than what the Republican leaders expected. As a result, Fillon managed to garnered more votes from among disillusioned Socialists and rightwing National Front radicals  who viewed him as a Republican Marine Le Pen,” Abzalov said.

Caught between Chirac and de Gaulle

While Alain Juppe was seen by many as a successor of Jacques Chirac, Francois Fillon was viewed as a true-blue de Gaullist. Indeed, Fillon fully shared the late General’s stated policy of France being equally independent from East and West.

As for the Socialists, few people believe that they have any chances of winning next year’s presidential elections.

Their popularity keeps going down and President Hollande is now supported by a meager 10 percent of the French population who can’t forgive him and his party the unpopular reforms, including the notorious “labor reform” which triggered a series of angry protests across the country.

Threat from the right

“Fillon has become a de-facto uncontested candidate. The Left has been a major failure and their disenchanted supporters will now have to choose between Fillon and Marine Le Pen. Most of them will surely vote for Fillon,” said Alexander Orlov, who heads the Institute of International Studies think tank in Moscow.

Dmitry Abzalov, meanwhile, warns about the rise of rightwing sentiment in France, which could undermine the Republican candidates’ chances of winning in 2017.

© REUTERS / Thomas Samson
Fillon's Clean Political, Criminal Records 'Nightmare' for Le Pen
According to a Harris Interactive poll, Francois Fillon can count on 26 percent of votes in the first round with 24 percent of voters going for Marine Le Pen.

Francois Holland decides to run again he could count on a mere 9 percent of votes, just like fellow Socialist Manuel Valls.

In the runoff vote, however, Francois Fillon could finish first with 67 percent of votes with Marine Le Pen lagging behind with just 33 percent, the poll indicated.