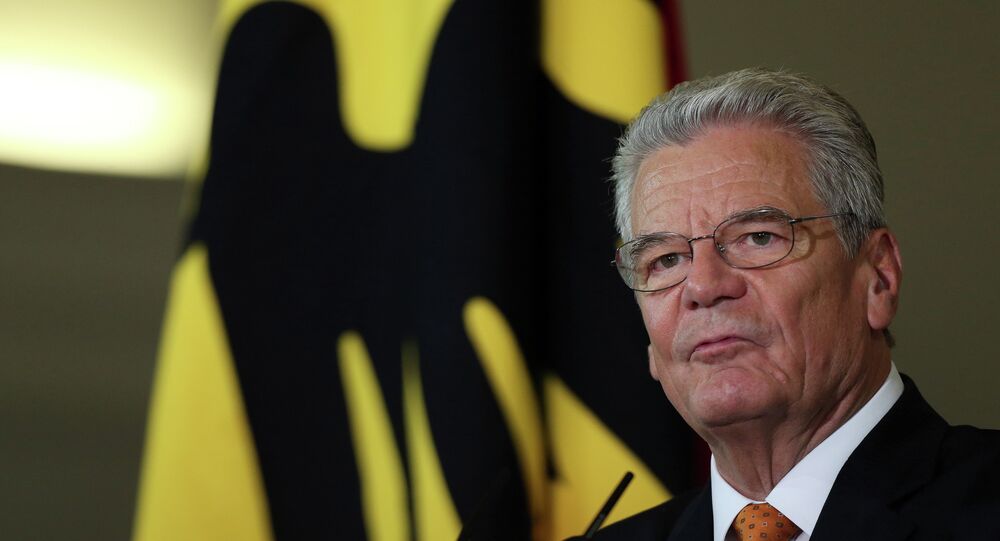 European integration has been accelerating so fast that not all of the EU’s members can keep pace with Germany, German President Joachim Gauck said in an interview with Welt am Sonntag newspaper.

© AFP 2021 / Nicholas Kamm
Structural Reforms Important for Italy, European Union Institutions - Renzi
According to the politician, a pause in the European integration process is needed because not everyone feels like a "world citizen."

"Many are not happy with the fact that our world is gradually turning into one organism," Gauck said.

He underscored that the European project is a major achievement and the united Europe stands for peace, freedom, security and democracy. At the same time, it also should bring people a sense of belonging and a sense of being at home.

"We should think about taking a pause to think what goal we want to achieve and at what speed," the politician suggested.

According to Gauch, currently the main goal is to strengthen the European Union and to restore people’s trust to the project of a united Europe.

"A pause is needed to restore public support [for European integration] which has recently shattered in some countries," he said.

Thus, the pause would "restore support of those people, who are currently dissatisfied with the EU — even though most of them live in countries that heavily benefit from EU membership, including in financial terms," the president said.

Europe saw a rise in euroskepticism in the past months, after the United Kingdom voted in a nationwide referendum to leave the bloc.

"We should demonstrate to Europeans that the European Union is based on the principles of freedom, democracy and the rule of law," he added.

Gauck said that the idea of a united Europe is not dead but further acceleration of the integration process risks destroying the most ambitious political project in the West.

Joachim Gauck has served as the president of Germany since March 2012. His presidential term expires in 2017. According to the law, the German president is mostly a representative position while power is concentrated in the hands of the head of the government, the Chancellor of Germany.