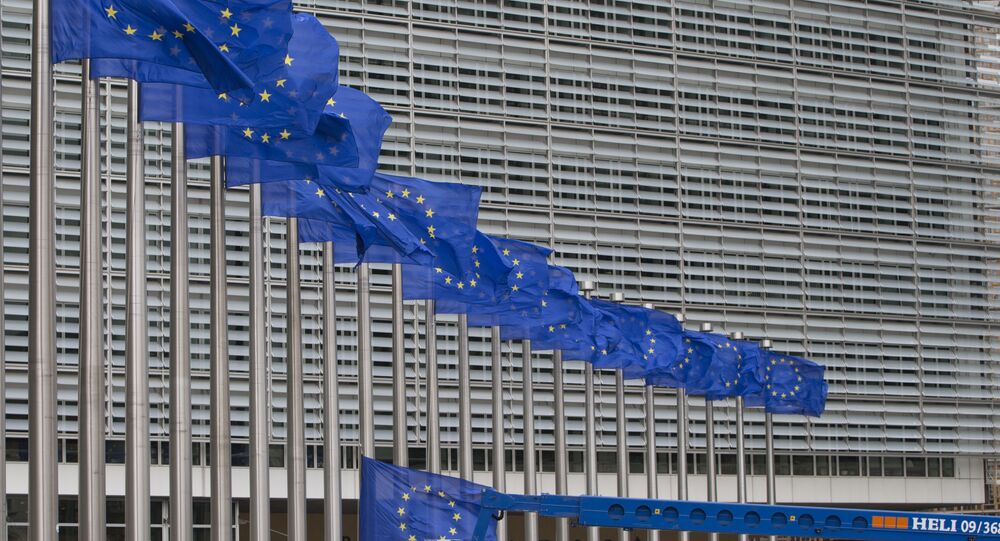 The European Parliament (EP) resolution seeking to counteract Russian media outlets is not only grotesque in its comparison of Russian media reports to Daesh propaganda, but also highlights the growing intolerance of the US and European establishments towards countries that are taking an independent stance.

© Flickr / European Parliament
Parlasur VP: EU Aims to Gag Journalists by Pushing 'Anti-Propaganda' Resolution
MOSCOW (Sputnik) – On Wednesday, the European Parliament voted in favor of a resolution on countering Russian media outlets, such as the Sputnik news agency and the RT broadcaster. As many as 304 voted in favor the document, 179 voted against and 208 abstained. With a total of 691 officials taking part in the vote, less than half supported the resolution, which draws a parallel between Russian media and the propaganda disseminated by Daesh, a jihadist group outlawed in Russia.

Brasilian journalist Jesus Chediak, head of the culture department of the Brazilian Press Association (ABI) told Sputnik that all media have the right to be treated with equality, not just Western states.

Editor-in-chief of the Correio do Brasil newspaper Gilberto de Souza told Sputnik that the resolution is part of a more global tendency of the West to suppress countries that do not wish to go along with its strengthening right-wing ideology and agenda.

According to de Souza, the resolution is an "attempt to block independent states, countries that are not EU allies, and most of all, to impose restrictive measures against journalists who work in these countries."

"I think there is great pressure currently exerted on them [journalists] that is in itself very dangerous," Souza warned.

"In my opinion, if such decisions [the resolution] are made with regard to one media of a certain country, the same decisions should be made against such media as BBC and Deutsche Welle. They are also government information channels and have great influence on public opinion in the entire world," Souza suggested.

Sputnik responded to the resolution by calling the move a direct violation of media freedom and human rights, while Russian President Vladimir Putin commented on the matter by pointing out that the document indicates a degradation of democracy in the West. Praising Sputnik and RT for their work, the president expressed hope that real media restrictions would not follow.

"I do not only agree [with Putin], I am deeply concerned about what is currently happening in the world … What we see today can probably only be compared to the period of the existence of Nazi Germany," he told Sputnik, at the same time stressing that "there is nothing in common" between the work of Russian media and the spread of radical Daesh ideology.

Political editor-in-chief of the Valeurs Actuelles weekly news magazine Raphaël Stainville also expressed surprise in an interview with Sputnik about the comparison that the European Parliament drew between Russian media reports and Daesh propaganda.

"One can only wonder about the resolution of the European Union, aimed at suppressing the freedom of the media in Europe. That vote is all the more shocking that it draws a parallel between the propaganda of Daesh, which must be actively fought against, and the work of the Russian press … Today they fight against the Russian press, and tomorrow? With the ‘Valeurs Actuelles’ magazine?" Stainville told Sputnik.

He stressed that his magazine often expresses opinions which contradict the positions of the European Union, and that it is important for free media to spread information even if those in power do not want particular information to reach the public.

© Flickr /
EU Resolution on Russian Media 'Wrong Political Decision', Italian Ex-FM Claims
"Today, the French, European media area deaf and blind to the activity and sentiments of the world. We must put an end to regulated media. We must put an end to ‘editors’ who no longer think and see the world only through the prism of their own interests. It is necessary to do the opposite, free the media of political correctness, with the European Union being one of its main promoters," Stainville stressed.

Japanese freelance journalist Sakai Tanaka, who used to work for the Kyodo news agency, told Sputnik that there is currently an information war going on between the West and other media not aligned with US and European agenda.

"An information war begins. And representatives of the American establishment are setting the goal of criticizing external media, such as the RT TV channel, the Sputnik information agency, Press TV and others that have precisely pointed to the facts of distorted information in American media," Tanaka said, recalling the blame games that US media played during the pre-election campaigns of Hillary Clinton and Donald Trump.

Tanaka stressed that Europe is highly dependent on the United States and the European Parliament resolution is a reflection of the current US-EU relations.

"The European Parliament which monitors the sentiments of the American establishment and acts as a puppet of the US, taking the side of the American government in this [information] war, has prepared a resolution that criticizes the RT channel and other mass information sources. The ruling circles in Europe are leaning more and more towards America, and within the framework of anti-Russia policy a tendency appears to view with hostility and to criticize without proof RT and Sputnik," Tanaka explained.

© Sputnik / Alexey Vitvitsky
Dodik: EU's 'Anti-Porpaganda' Resolution Unmasks Inability to Compete With Truth
He expressed hope that RT and Sputnik would continue to cover European events in an objective way and would overcome the hostility directed against them.

"One way or another, there are media in every country that express the stance of the government and it is important that people in the entire world have the opportunity to acquaint themselves with different and often opposite perspectives and to formulate their own opinion on this or that problem. Sputnik does not want to silence media in the US, Europe and Asia, but wants to have the right to express its point of view along with others," Tanaka said.

Russian Foreign Ministry’s Spokeswoman Maria Zakharova sent on Friday a letter to Organization for Security and Co-operation in Europe (OSCE) Representative on Freedom of the Media Dunja Mijatovic calling on her to analyze the European Parliament’s resolution aimed at counteracting Russian media.