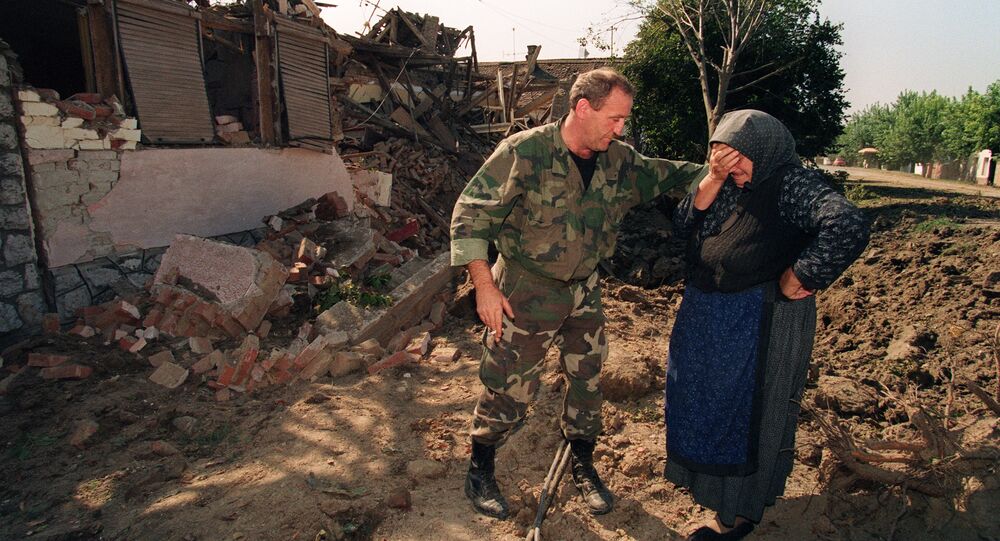 Earlier this week, Croatian Prime Minister Andrej Plenkovic visited Kiev, where he announced that Zagreb can "transfer Croatia's experiences" to Ukraine on the "peaceful reintegration" of war-torn Donbass. However, journalists and commentators told Sputnik that Croatia should recall its own troubled 1990s-era history before giving anyone advice.

On Monday, Plenkovic visited Kiev. In an apparent effort to present himself as peacemaker, the Croatian prime minister suggested that Kiev could learn from Zagreb's wealth of experience regarding "the peaceful reintegration of the occupied territories" of Donetsk and Lugansk.

The prime minister told his Ukrainian colleagues that Zagreb has the know-how on the reintegration of lost territories from the mid-1990s, when the former Yugoslav breakaway itself lost over a quarter of its territory to a restless Serbian ethnic minority.

"Our side is prepared to provide advice and to participate [in consultations with Ukrainian Foreign Affairs Minsiter Pavlo] Klimkin and [Croatian Deputy Foreign Minister Zdravko] Bushich," Plenkovic said, adding that Bushich has been appointed the head of the working group to assist Kiev in 'reintegrating' the Donbass.

© Sputnik / Natalia Seliverstova
Moscow Concerned by Croatia's Drive to Share 'Reintegration' Experience With Ukraine
The Russian Foreign Ministry has expressed "serious concern" over Plenkovic's visit and the creation of the so-called working group, pointing out that the fighting in Croatia in the mid-1990s resulted in many casualties and the exodus of over a quarter-million Serbs from the country. The Ministry stressed that Moscow is "convinced that the advice of foreign consultants could create a dangerous illusion among officials in Kiev that military scenarios are possible, which does not help to strengthen security in eastern Ukraine."

Ukraine's eastern provinces declared independence in the spring of 2014 in the aftermath of the Maidan coup d'état, an EU- and US-supported uprising which came about after Kiev rejected an association deal with Brussels in favor of economic integration with Russia. After coming to power, the new authorities in Kiev issued a series of threats to the eastern Ukraine's Russian-speaking minority. In April 2014, Kiev moved military into the restless provinces, resulting in a bloody fratricidal war which killed at least ten thousand people, wounded over 22,000, and seen over 2.5 million internally or externally displaced.

Since February 2015, a ceasefire deal worked out in the Belarusian capital of Minsk has been in place, although violations are regularly reported. Kiev has refused to fulfil its commitments under Minsk, insisting that the provisions should be fulfilled out of the order in which they were agreed. The leaders of the self-proclaimed republics in Donetsk and Lugansk, meanwhile, say that the agreement's thirteen points must be implemented in the order they were signed.

Recalling the 1990s-era conflict in Croatia, Sputnik Serbian columnist Nikola Joksimovic wrote that it's actually true that "the situation in [President Franjo] Tudman's Croatia and [Petro] Poroshenko's Ukraine is similar in many ways. In both cases, some citizens rose up against the oppression of the minority by the majority. In both cases, these citizens have been seen as 'occupiers' – as someone who came to the area only yesterday, rather than having lived there for centuries. Another similarity is that Western countries, if not openly then at least secretly supported and support the actions of these countries."

© Photo : Ministry of Defence of Ukraine
Obama's Parting Gift to Kiev? NATO 'Strategic Advisors' Set Up Shop in Ukraine
Accordingly, the journalist noted that this list of similarities "is quite sufficient for Croatia to undertake to assist Ukraine in implementing these 'reintegration' plans." The question, he suggested, is whether Zagreb could take such a decision independently.

"In answering this question, it's necessary to take into account two facts," Joksimovic explained. "First, Croatia is a NATO member, and second, the reintegration of Serb-populated areas in Croatia was accompanied by the inflow of US military advisers, various retired officers and the employees of private military firms. This, by the way, is also being observed in Ukraine. So the answer to the question is that Zagreb would hardly undertake to help Kiev without consulting with the US first."

At the same time, the journalist warned that a precedent already exists for a country trying to use the Croatian experience to solve a problem with minorities. In August 2008, Georgian President Mikheil Saakashvili attempted to carry out ethnic cleansing in South Ossetia, which failed only thanks to the timely intervention of the Russian military, which stopped Georgian forces in their tracks and assured that South Ossetia and Abkhazia became independent states.

Joksimovic suggested that Saakashvili had failed to learn the lessons of Croatian President Tudman, whose military limited its campaign of ethnic cleansing largely to territories which didn't border neighboring Serbia directly, while negotiating with those that did on reintegration into Croatia. "Could this kind of reintegration appeal to the residents of Donetsk and Lugansk? If one believes the experiences of the Vukovar Serbs, the answer is – it's unlikely," the journalist stressed.

Speaking to Sputnik, Zoran Kojic, the head of the Serbian People's Forum, an NGO devoted to protecting the Serb minority's interests in Croatia, confirmed that after two decades of efforts at integration, the picture is not so rosy.

"We have seen a complete disregard for the rights of the Serbian national minority," Kojic said. "Therefore, I fear that the transfer of this experience to Ukraine would have extremely adverse consequences."

© Sputnik / Alexander Vilf
Kiev Stalls Discussions on Donbass' Special Status Under 'Steinmeier Formula' - DPR
"For example, the population will gradually begin to leave the Donbass, similarly to what happened in Vukovar in 1997, 2000 and 2016. Moreover, we have seen neglect of economic and any other form of development in the 'integrated' regions, not to mention the constitutional rights of the minority."

For his part, Vadim Trukhachev, a senior lecturer in international politics at the Russian State University for the Humanities, told Sputnik that he feared what may be swirling around in the heads of Ukrainian politicians like Andriy Paruby, who have "long perceived Croatia's military solution as a useful experience" in 'solving' the crisis in eastern Ukraine.

"The fact is that the campaign which was conducted by the political and military leadership of Croatia in the Republic of Serbian Krajina can be called genocide and ethnic cleansing, there is no other way I can describe it," Trukhachev said. "I think that Zagreb can help Kiev by explaining to them all the advantages and disadvantages of such actions."

At the same time, the analyst warned that he believed that Kiev "has already chosen the military option, and in this sense, Zagreb's advice will not be of great importance to them. On the other hand, this is not 1995. Croatia then received the full support of the North Atlantic Alliance, both diplomatically and militarily. Will NATO support Ukraine, particularly in the current circumstances? I'm not so sure."

Ultimately, Sputnik Serbian stressed that if peace is to be achieved in eastern Ukraine, "dialogue between the conflicting parties is the only solution. No matter how long they last, negotiations are always better than war, genocide or ethnic cleansing. And the location for negotiations remains the same – Minsk."