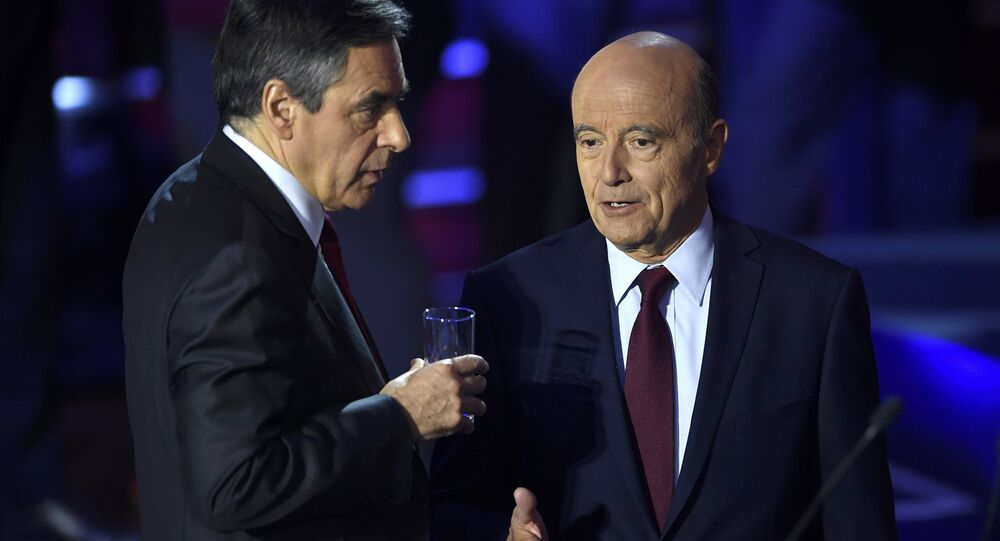 The emphasis put on matters concerning family values, gay marriages, abortion and other social issues during the last stage of France's The Republicans party primaries matches the expectations of the French people, the party's former candidate Jean-Frederic Poisson told Sputnik on Friday.

MOSCOW (Sputnik) — The Republicans is currently in the middle of a presidential election campaign with a sole candidate to run for the French presidency in 2017 from the party to be determined Sunday. The main contenders for the nomination are two former prime ministers, Francois Fillon and Alain Juppe.

"We see that this second round campaign is essentially focused on 'societal' issues because there is a real expectation of the French on these issues… These are important subjects that were too neglected in the first part of the campaign, when terrorism, Islam and the economy were widely treated," Poisson, who heads a minor Christian Democratic Party, said.

© Sputnik / Michael Alaeddin
Trump, Fillon Could Have Prevented Syrian Crisis as US, French Presidents
During the election campaign, 62-years Fillon, a devout parishioner and father of five children, promised to partially reverse the contradictory 2013 Taubira law, introduced by Christiane Taubira, the justice minister at the time, that allowed same-sex couples to marry. It was met with huge protests in the past, and mid-October this year, tens of thousands of protesters took to the streets of Paris again to demonstrate against gay marriage, calling for candidates in France's presidential election to support "traditional family values". First of all, Fillon wants to prevent same-sex couples from being granted “full” adoption rights.

While Fillon reiterated that the family was “certainly not a place for dangerous social experimentation”, Juppe, who is currently the mayor of Bordeaux, stated many times his opposition to reviewing the already adopted law on gay marriage, saying that "youth, including some raised in the Catholic religion, now finds it normal for homosexuals to be able to marry civilly."

"The family has been a major issue in recent years in France and there have been multiple attacks against it. Abortion remains a sensitive issue, and I regret that it is used as a political weapon when it should be a matter of reflection," Poisson added, mentioning another hot topic at the debates between Fillon and Juppe.

© AP Photo / Francois Mori
Fillon, Juppe Agree That France Needs Fewer Parliament Members
Fillon has previously said that as a Catholic, he was personally opposed to abortion, but nevertheless would not try to change the 1975 law that legalized it in France. On Tuesday, speaking on Europe 1 radio, Juppe called on his rival to clarify his position on abortion, saying that Fillon "first said that it was a fundamental right for women, then went back on this statement."

Fillon is currently leading in The Republicans' primaries. He won more than 40 percent of votes over 28 percent for Juppe in the first round. According to the Elabe pollster, Fillon sounded much more convincing at the TV debates on Thursday to 71 percent of conservative and center-right voters.