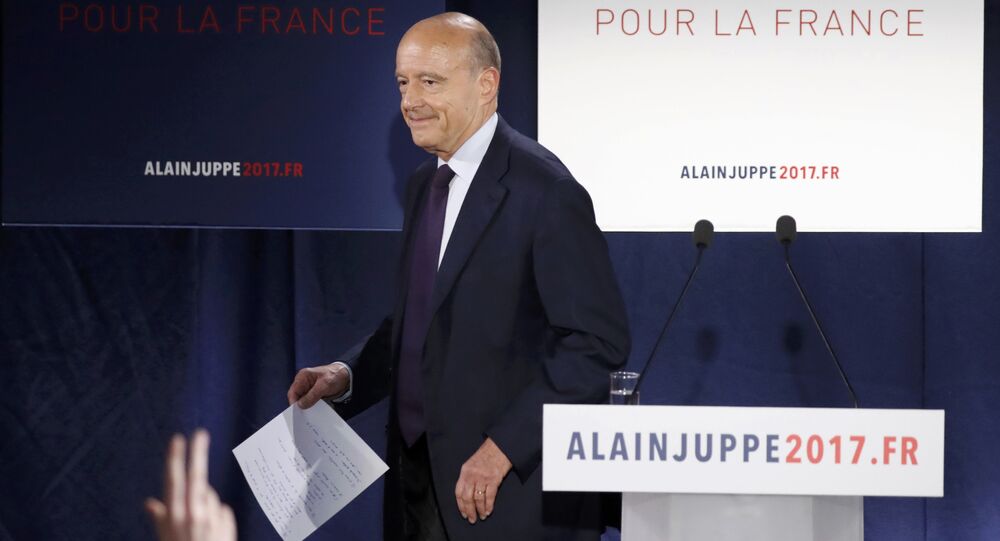 Juppe Unlikely to Win French Election Due to 'Naivety' on Islam, Immigration

France’s The Republicans party presidential candidate Alain Juppe is too light-minded about the issues of Islam and immigration, critical for the country, to be able to beat leader of the far-right National Front Marine Le Pen in the second round of the elections, the party's former candidate Jean-Frederic Poisson told Sputnik on Thursday.

MOSCOW (Sputnik) — His comment came as the opposition right-wing Republican party is in the middle of election campaign, with the sole candidate to represent the party at the presidential elections next spring to be determined on Sunday. Two candidates are racing for the party's ticket — Juppe, who served as the prime-minister under former President Jacques Chiraque, and Francois Fillon, who held the same post under Nicolas Sarkozy in 2007-2012. The party nominee’s main rival is set to be Le Pen, as the ruling Socialist Party has low support ratings.

"I think that Alain Juppe with a leftist program and a certain naivety on the subjects of Islam and immigration, would absolutely not be able to bar Marine Le Pen [from victory in the second round in May]," Poisson, who also heads the small Christian Democrat Party, suggested.

According to Poisson, Juppe "defends multiculturalism dangerous for our social cohesion."

© REUTERS / Thomas Samson
French Right Defies Polls, Sidelines Sarkozy, Set to Take on Far-Right Le Pen
Juppe’s program focuses on tough reforms with the aim to save up to €100bn in public spending over five years. He also wants to raise the pension age from 62 to 65, lift the 35-hour work week back to 39 hours, restrict unemployment benefits and scrap the wealth tax to attract investors.

Poisson, who was eliminated in the first round of The Republicans' primaries, has already endorsed Fillon, a candidate who recently published a book titled "Beating Islamic totalitarianism."

"I gave my support to Francois Fillon because I think his program is much better for France than that of Alain Juppe. Francois Fillon made a commitment to me on several key subjects: a reinforced family policy, the educational freedom of parents, school, the fight against poverty, social dialogue, the sovereignty of France and the access to autonomy," Poisson explained his choice to Sputnik.

Fillon in his program took a hard line against Islamist terrorism, promising administrative controls to be imposed on Islam in France, including dissolving the Salafi movement and banning preaching in Arabic. He was also a staunch supporter of a proposed law to ban burkinis — Muslim full-body swimsuits — from French beaches.

© AFP 2020 / PATRICK BAZ
France Strikes Daesh Stronghold From Charles de Gaulle Ahead of Mosul Offensive
The French presidential election is scheduled for April and May 2017.

Earlier this month, French President Francois Hollande announced his intention to extend the state of emergency in the country to last until the end of his presidential term in 2017, due to the direct threat that terrorism poses to democracy and in view of the approaching presidential elections as well as due to the commitments the Socialist government has made to continue fighting terrorism.

France is a member of a US-led coalition fighting the Daesh terrorist group, which took responsibility for last year's Paris attacks and which is outlawed in many countries including Russia, in Syria and Iraq since 2014.