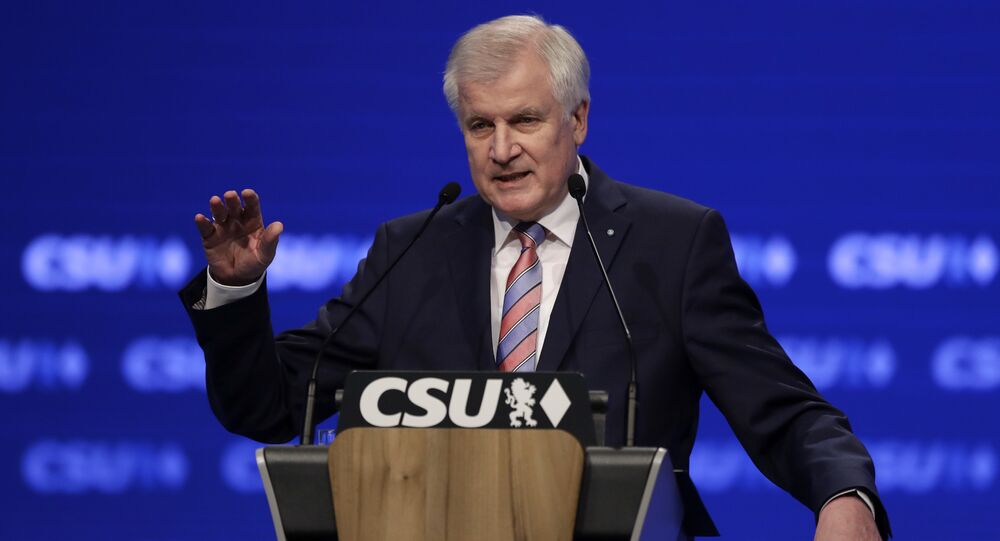 The leader of Bavaria's CSU party, Horst Seehofer, has said that his party will only support a coalition with Angela Merkel's CDU party if some key conditions are met, including securing the country's borders and imposing a limit on immigration.

© AFP 2021 / PHILIPP GUELLAND
Asylum Seekers in Bavaria Set Off on Arduous 13-Day Protest March
Limiting immigration is a topic of discord between the Bavarian Christian Social Union (CSU) and its sister party, Angela Merkel's Christian Democratic Union (CDU), and the latter can't count on CSU support in next year's elections without limiting the number of arrivals, CSU leader Horst Seehofer said on Thursday.

"The most difficult question here is the upper limit for the admission of refugees. We will insist on a maximum 200,000 per year, because limitation is a prerequisite for successful integration," Seehofer told the Ausgberger Allgemeine newspaper.

"The flow of migration is still strong and will continue to grow in the coming years. That's why we need a set of rules which ensure that what happened after September 5 2015 doesn't happen again the coming years. Only in this way can we overcome the division in our society. The political coordinates have changed because of the border opening in September 2015, and I will not rest until we have remedied this development."

In the first nine months of 2015 more than 710,000 migrants entered Europe across the Mediterranean and the Aegean Seas.

Countries in Europe's south and east struggled to cope with the flow of migrants, and on September 4 the governments of Germany and Austria opened their borders to thousands of migrants, who had been waiting in Hungary following Budapest's decision to halt trains traveling to Western Europe.

© AP Photo / Markus Schreiber
Strangers in Their Homeland: Germans Leaving Germany En Masse Due to Migrants
Seehofer attributed the CDU party's poor showing in local elections this year to this open-door policy, and urged the party to put a recent change in rhetoric into action.

"The CDU has already moved (its position on limiting migration). It can't ignore the fact that polls give the Union between six and ten percent less than its last election result. Immigration is the key reason and the CDU knows that too. It is also talking about limitation, control and a dominant culture. These are concepts which show that an approximation is taking place in choice of words," Seehofer said.

Responding to criticism from right-wing opponents who argue that a vote for the CSU in next year's election is a vote for Merkel, Seehofer said that his party is the only mainstream one which is responding to voter concerns about migration, and forced Merkel's CDU to control immigration.

"Firstly, I would remark that everything I have argued for in recent months the Chancellor has taken on. Without the CSU there would be no border controls and no tightening of asylum law. Secondly, I assure voters that if you vote for us, we will enforce this limitation. We will only co-operate with Berlin if this is realized," Seehofer said.

The issue of a limit to migration appears to be an area continuing contention between the CSU and CDU, who have governed in coalition with the SPD since 2013.

Despite the CSU's assurance to voters, its CDU sister party has so far refused to support an upper migration limit.

On Thursday CDU deputy chairman Armin Laschet told the Frankfurter Allgemeine newspaper that his party rejects the idea, which he said is "irrelevant" because of the EU-Turkey migrant deal.

"We probably can't reach a consensus on this issue, but it has also become irrelevant. The number of asylum seekers currently coming to us is lower than the number cited by the CSU as the upper limit. This because what should have been done with the introduction of Schengen has now begun: protecting the the EU's external borders," Laschet said.

Earlier this month Frank-Juergen Weise, director of Germany's Federal Office for Migration and Refugees, told MDR Aktuell that less than 300,000 refugees are predicted to arrive in Germany this year, as a result of the Turkey deal and agreements with Italy and Greece.

On Sunday Angela Merkel ended months of speculation by announcing her candidacy for a fourth term as Chancellor, ahead of German federal elections which are scheduled to take place in autumn next year.

© REUTERS / Michaela Rehle
New Poll Finds Germans Want Immediate Freeze on Immigration
Merkel did so despite a string of disappointments for the CDU in local elections held in several German states this year.

In regional elections in September in the north German state of Mecklenburg-Vorpommern, the CDU received just 19 percent of the vote, finishing behind the SDP (30.6 percent) and right-wing newcomers Alternative for Germany (AfD), which received 20.8 percent of the vote.

In September elections in Berlin the CDU trailed the SPD with just 17.6 percent of the vote, followed by the Greens, Die Linke and AfD.

According to a survey published last week by the Bild newspaper, Merkel's approval rating has picked up in recent months. Last week 55 percent of respondents said they wanted Merkel to stay, followed by 39 percent who wanted her to go. In August, just 42 percent supported Merkel's continued role as Chancellor, but fifty percent did not want her to run again.