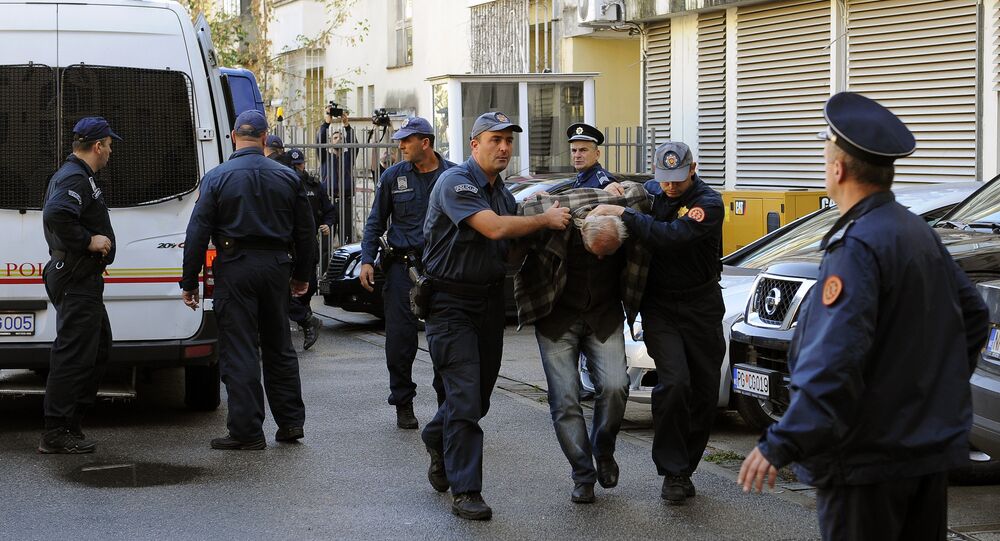 However, the elections took place amid controversy, as Montenegrin state prosecutors told local newspapers about the arrest of 20 individuals in connection with an alleged terror plot on election day.

Police sources claim the plotters included one member of the opposition Democratic Front (DF) party, and they planned to seize control of state institutions and kidnap Prime Minister Milo Djukanovic from the state parliament.

The day after the elections leaders from of Montenegro's four largest opposition parties were in agreement over their their refusal to recognize the election result. The Democratic Front (DF) received 21.4 percent of votes and 18 seats, the Kljuc (Key) coalition nine seats, the Democrats eight and the Social Democratic Party (SDP) four.

© Sputnik / Vladimir Fedorenko
PACE Supports Montenegro Elections Results Despite Fraud Allegations
"We are waiting for the authorities to tell us as soon as possible whether there was a coup attempt planned on Sunday. If there was, then the elections are irregular because they were held in extraordinary circumstances. If these reports aren't true, then this whole episode has been directly exploited to give the DPS an advantage," a source close to the discussions told Montenegro's Vijesti news outlet.

On Monday a source in the Montenegrin state prosecutor's office told Radio Television Serbia that 21 people are being investigated for allegedly taking part in the coup attempt, including three Serbs and two Russians.

Responding to questions about the matter earlier this month, Kremlin spokesman Dmitry Peskov stated that "we do not have any information and, of course, categorically deny the possibility of official involvement in any attempts to organize illegal actions."

Igor Damjanovic, co-ordinator of the peace movement "No to war, no to NATO," told Sputnik Srbija that the coup attempt story is being exploited by Djukanovic and his government to discredit opposition to the country's controversial NATO accession negotiations.

"This is just another use of this really tragicomic story about the coup. The first was when Djukanovic provided himself with a get-out card in case he lost the election, that he could declare the elections were illegitimate and impose a state of emergency," Damjanovic said.

"This coup affair was entirely fabricated, and was used as a pretext for arresting the main opponents of Montenegrin NATO accession."

"From his (Djukanovic's) statements we can have realized that these (the targets of the operation to discredit opposition figures) are not only politicians from Democratic Front, but the media and non-governmental organizations which are against the crazy intention of the Montenegrin regime to enter NATO," Damjanovic said.

© AP Photo / Virginia Mayo
Montenegro Prospects in NATO Depend on US Decisions Made at 'Big Table'
Damjanovic gave a grave warning of the consequences for Montenegro of going against the popular will and pushing NATO accession through parliament, in spite of popular protests.

"Trampling on the popular will could turn into serious instability because that is a simple violation of basic rights and freedoms. In that case, against such authority, everything becomes legitimate. I would like to mention the American Declaration of Independence, which states that the legitimacy of the government depends on the will of the people. When the government doesn't conform to the will of the majority of the people, then they have the right to change it," Damjanovic said.