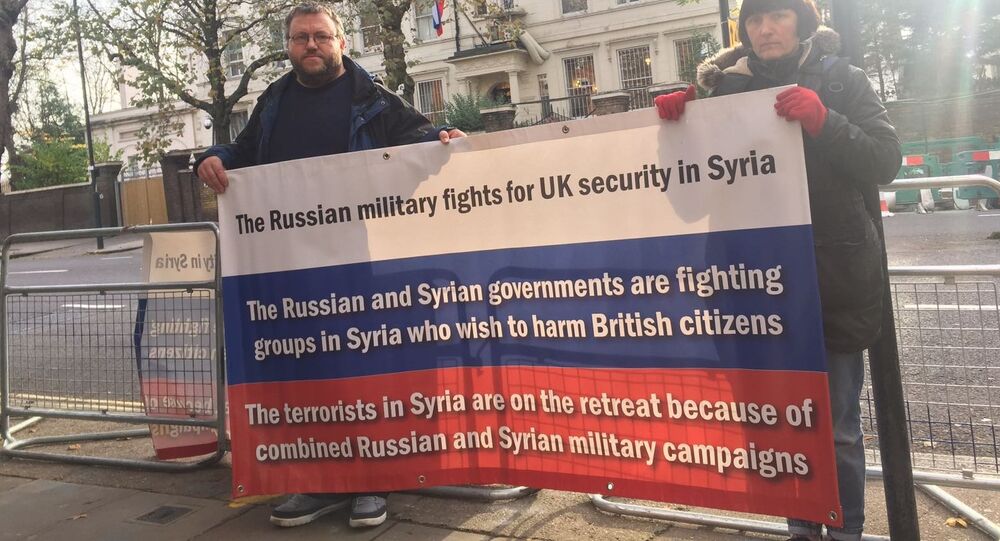 A demonstration took place outside the Russian Embassy in Central London on the morning of November 23, showing solidarity with the Russian military strategy in Syria and the worthy efforts they feel are being made in the global fight against terrorism.

Publisher and editor of UK magazine Politics First, Dr. Marcus Papadopoulos, was one of the organizers of the demo and he spoke about the reasons for holding the demo:

"The rally is held in support of the Russian military campaign in Syria and we are here to provide the input on Moscow's actions which we do not hear enough about in the mainstream media," he told Sputnik.

"The actions are legal and more importantly, vital in the fight against Islamist terrorism, not just in Syria but also in the world in general. British people must be aware that the Russian and Syrian militaries are, in effect, fighting for the security of Britain, too, as the terrorists in Syria pose a terrible and credible threat to UK security," Dr. Papadopoulos added.

"In short, the Russian soldier is risking his/her life for humanity," a demonstrator told Sputnik.

As Ambassador of the Russian Federation to the UK, Mr. Alexander Yakovenko greeted the demonstarors, he expressed his thoughts regarding the current anti-Russian sentiment dominating mainstream media and expressed by certain UK politicians:

"Most people understand the complexities of what is happening on the ground in Syria, and it must be pointed out that resolutions are actively being discussed in the European Parliament. I believe that it is also very important that the public has access to accurate information of the reality of what is going on and why the military interventions are so necessary," Mr. Yakovenko told Sputnik.

Russian ambassador to the UK @Amb_Yakovenko told Sputnik his view on the media coverage of the conflict in #Syria https://t.co/vy545JwTfG pic.twitter.com/bss2HfNgbw

Mr. Yakovenko also provided some input on the issue of the major humanitarian issue that has gripped densely populated civilian regions across Syria. A crisis affecting innocent people, including young children and their families, who are reported as being left without adequate means of support and aid.

"We are working closely with the United Nations and we are helping in every way possible to provide humanitarian support to as many of the people as we can. We are doing everything in this area and are just as concerned about the people of Syria as are the wider international communities," Mr. Yakovenko told Sputnik.

Russian ambassador to the UK @Amb_Yakovenko told Sputnik his view on the US policy in #Syria https://t.co/ppqA2LyCIk pic.twitter.com/M66XM0XZlt

Many of the demonstrators also echoed similar sentiments of concern for the civilians on the ground:

"Our heart hurts and we just want the conflict to stop right now," one of the demonstrators told Sputnik.

"To think of how innocent lives are being affected is unimaginable, but if the efforts of Russian military action was not there, it cannot be stressed enough how destructive that could be for everyone. These militants do not care for anyone, including the people of Syria," she added.

Kat was another of the demonstrators at the rally and she spoke about how the conflict in Syria affects her:

"I just want it all to stop. War of any kind always causes suffering to real people, and this is all the fault of our politicians. I do also believe that the public feeling against Russia has gotten so bad now because of the lack of balanced information given to everyone. I have experienced so many incidents of racism in London when people learn I am from Russia and this I feel is also wrong," she told Sputnik.