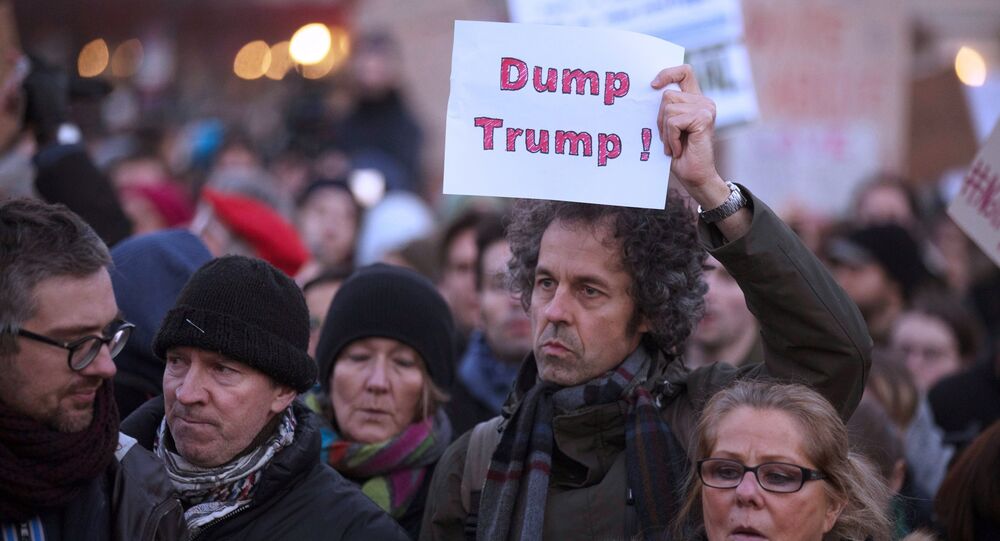 As Donald Trump prepares himself for the White House on the back of a pledge to deport illegal immigrants from the US, a historian has discovered a royal decree dating back to the early 1900s and ordering the President-elect's grandfather to leave Germany and never return.

Trump's German grandfather, Friedrich Trump, was ordered to leave the kingdom of Bavaria in February 1905, over his failure to undertake military service and properly inform authorities of his initial departure to the US 20 years earlier.

© AP Photo / Landesarchiv Speyer
The reproductions provided by Landesarchiv Speyer show a letter by the grandfather of US President-elect Donald Trump. The handwritten letter has been found in a German archive in which Donald Trump's grandfather unsuccessfully fought his expulsion from the country for failing to perform mandatory military service.

"Friedrich Trump emigrated from Germany to the USA in 1885. However, he failed to de-register from his homeland and had not carried out his military service, which is why the authorities rejected his attempt at repatriation," Roland Paul, a historian from Rhineland-Palatinate who found the document in local archives, told the tabloid Bild.

Friedrich Trump emigrated to US in 1885 for gold rush, did not get Germany's permission to leave. Was refused to resettle in Germany 1905.

​The decree orders the "American citizen and pensioner Friedrich Trump" to leave the kingdom within eight weeks "or else expect to be deported."

While describing the document as an "unspectacular piece of paper," Bild said it had "changed world history."

The Trumps: From Kallstadt to New York

Friedrich Trump was born in the south-western town of Kallstadt in 1869, but emigrated to US at the age of 16 to escape the poverty of his life in Germany and cash in on the gold rush on the other side of the Atlantic.

"Friedrich, Trump's grandfather, lived in a house which you would not even pay attention to when passing by. It's a totally ordinary house on a quiet village lane," Jorg Doerr, a local tourist manager in Kallstadt, told Sputnik.

​Meanwhile, Donald Trump's pledge to deport millions of illegal immigrants in the US has been labeled ironic by some, who noted that Trump's grandfather, Friedrich, actually arrived in the US as an illegal economic migrant.

Trump letter to the Prince of Bavaria. #friedrichtrump #trump pic.twitter.com/7F255jq9jZ

"Friedrich emigrated illegally. He didn't serve in the army, so he didn't have permission to leave. Years later, when he had become a wealthy man, he wanted to go back and live in Germany, but he was not allowed to. In 1905, he had to come back to the US," Doerr said.

Friedrich Trump's attempt to overturn the royal decree was rejected, with Trump leaving Germany for New York in July 1905.

Trump Deportation Plans Would Cause Distrust Between Police, Communities