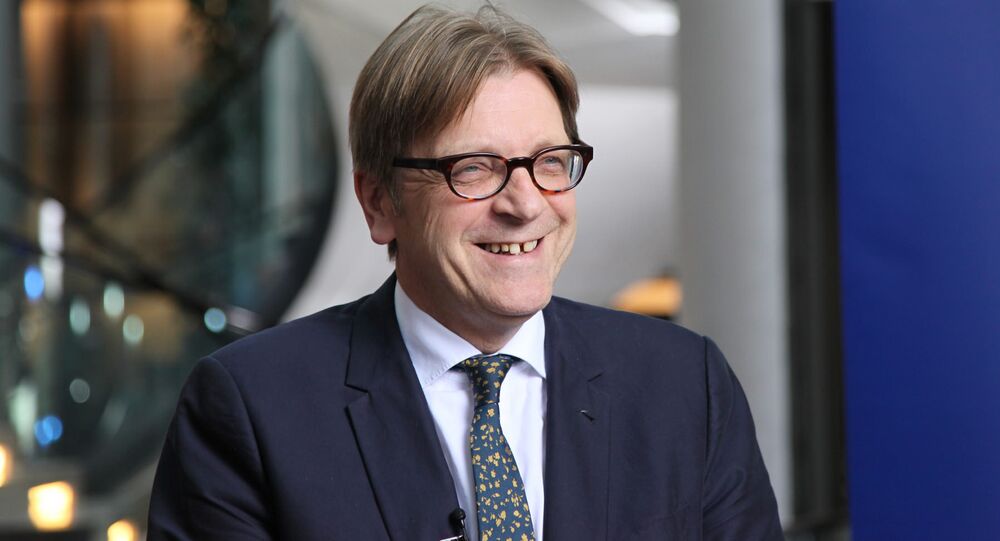 Britain's Brexit boss David Davis, the secretary of state for leaving the European Union, is in Strasbourg for the start of his negotiations with the European Parliament chief negotiator, a man he once referred to as "Satan."

However the two men reportedly laughed off the biblical remark made by David Davis, "get thee behind me Satan," in reference to Guy Verhofstadt, president of the Alliance of Liberals and Democrats for Europe during a Commons committee in September.

First meeting with @DavidDavisMP on Brexit. Agreement needs to be found ahead of the new 2019 European elections pic.twitter.com/Bzsb4x7HRt

​But Brexit isn't really a laughing matter, in fact, according to Mr. Verhofstadt, it's more of a "hell of a conversation."

David Davies will meet EU's chief negotiator iGuy Verhofstadt who Davies referred to as "get thee behind me Satan". Davies is a disgrace.

​After the meeting, Mr. Davis said Guy Verhofstadt was a "very nice man" without revealing any details of their dialogue about how Brexit will be approached, just saying it had been a "good start."

What is for sure, is that Mr. Verhofstadt was clear that there will be no compromise on freedom of movement and that he wanted an exit deal to be brokered before the next European Parliament elections in 2019.

​But far from being the political showdown that had been expected between Mr. Davis and Mr. Verhofstadt, Brexit, it appears among some European circles, is somewhat of a pantomime.

Manfred Weber, leader of the EPP (European People's Party), also held talks with David Davis, reiterating the non-negotiable details of the Brexit deal, which includes the free movement of people.

"Unfortunately, I haven't really heard anything new," Mr. Weber said of his discussions with David Davis.

"I haven't really heard how the British government wants to tackle Brexit or what Brexit really means. We need to take into account the interests of 450 million European citizens. What we really expect are clear proposals," Mr. Weber added.

Unfortunately I haven’t heard anything new f/ @DavidDavisMP today. For us it’s clear: The 4 fundamental freedoms are not negotiable. #Brexit pic.twitter.com/kdcoNhPFEw

"Our view, is that we can get an outcome which will be in the interests of the European Union and in the interest of Britain which will meet the requirement of the referendum. All of those are possible. That's what negotiations are about," Mr. Davis said.

​His boss, the British Prime Minister Theresa May is still convinced "Brexit means Brexit," but people still don't know what that is. As far as the European Parliament is concerned, it's certainly not a compromise on the freedom of movement.

The UK, according to the European Parliament will not be able to remain in the single market without accepting the free movement of people.

As Britain's Brexit showdown continues, it seems negotiations between the EU and the UK still rest on being able to strike a balance between Britain trading freely on the European single market — and as Brexiteers promised — restricting the right of EU citizens to live and work in Britain at the same time.