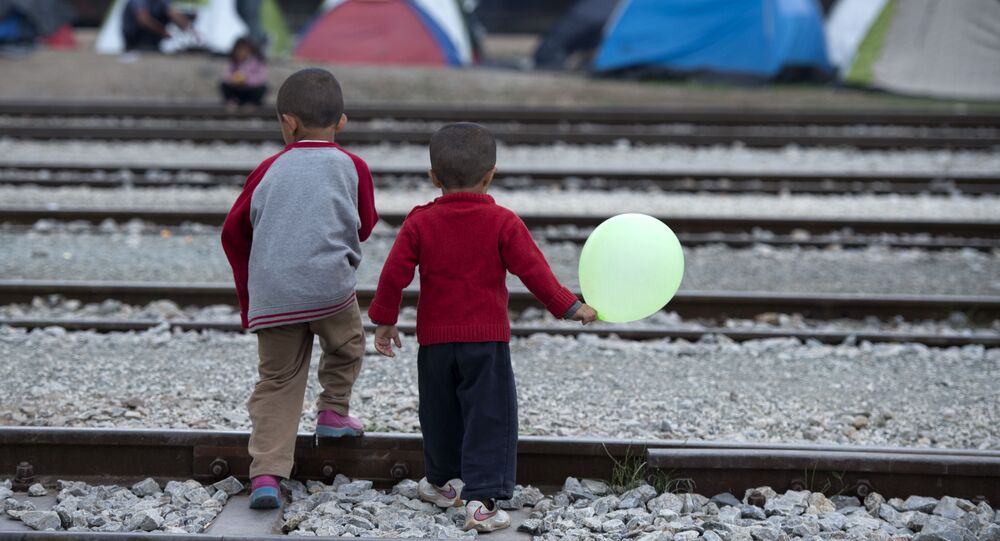 Despite its well-justified profile as a human rights champion and its hearty involvement in last year's migrant crisis, Sweden has come under fire from the United Nations for its handling of refugees, in particular unaccompanied children.

© AFP 2020 / LOUISA GOULIAMAKI
Forever Young: Sweden Tussles With 'Refugee Children' in Their Thirties
Regardless of Sweden's humanitarian efforts, the Nordic country was criticized by the UN for automatically initiating asylum procedures for unaccompanied refugee children, instead of sending the kids home to their parents or at least trying to locate their whereabouts.

According to Vincent Cochetel, Europe Director at the UN Refugee Agency (UNHCR), Sweden must invest more effort in finding the parents of refugee children and adolescents who arrive in the Nordic country, instead of routinely initiating admittance procedures.

Cochetel conceded that repatriation of children indeed sounded negative, yet ventured that it was well justified by family unification. According to Cochetel, Sweden violates the UN Convention on the Rights of the Child by providing asylum to unaccompanied minors, when it is still possible to trace their parents.

"Children should be seen as children, not as asylum seekers. Evaluating the possibility of a family reunion should be the first step," Vincent Cochetel told Swedish daily Dagens Nyheter.

© AFP 2020 / JONATHAN NACKSTRAND
There's No Place Like Home: 'New Swedes' to Move Into Cities of Their Own
When the migrant crisis reached its peak last autumn, little was done to trace refugee children's parents. Although the asylum process may indeed be a good solution for some, others are definitely better off with their families, Cochetel argued. According to Cochetel it is important to refrain from using phrasing that depicts the children's return in a negative light and instead call it "family re-unification."

"How can one determine what is best for the child without knowing where his or her family is and how they feel? You cannot skip this step," Cochetel argued. "Over 30 percent of all Afghan children are brought up with their families in Iran. Is it really best for them to go through the whole asylum process in Sweden or are they better off with their parents in Iran? Normally, we believe that parents stand for the basic protection of the child."

Last year, Sweden took in a record 163,000 asylum-seekers, of which over 35,000 were classed as "unaccompanied children." Over half of them came from Afghanistan, followed by Syria, Somalia and Eritrea. The vast majority of them were boys aged 13-17. A total of 88 percent of them were granted asylum. This year, Sweden accepted 1,704 refugee children, according to statistics from the Swedish Migration Board.

© AFP 2020 / JONATHAN NACKSTRAND
Lonely Children: 'Humane' Sweden Tortures Its Kids With Isolation
In Sweden, two problems are closely related to "unaccompanied refugee children." First, there is the problem of correct age verification. Previously, numerous Swedish experts expressed concern that asylum-seekers habitually downplay their age to make use of welfare benefits and obtain a residence permit. Second, Swedish authorities are increasingly worried about the "disappearance" of refugee children. According to previous reports, over 1,800 underage asylum-seekers have vanished from the radar across their country.

"A situation with a growing group of children and adolescents on the run may quickly become unsustainable. We may get a parallel society with young people in a very vulnerable situation," Amir Hashemi-Nik of the Stockholm County Administrative Board told Dagens Nyheter.

According to Vincent Cochetel, European nations must find a common and universally applicable method for age assessment, which would also ensure that children are properly registered and eliminate the risk of trafficking.