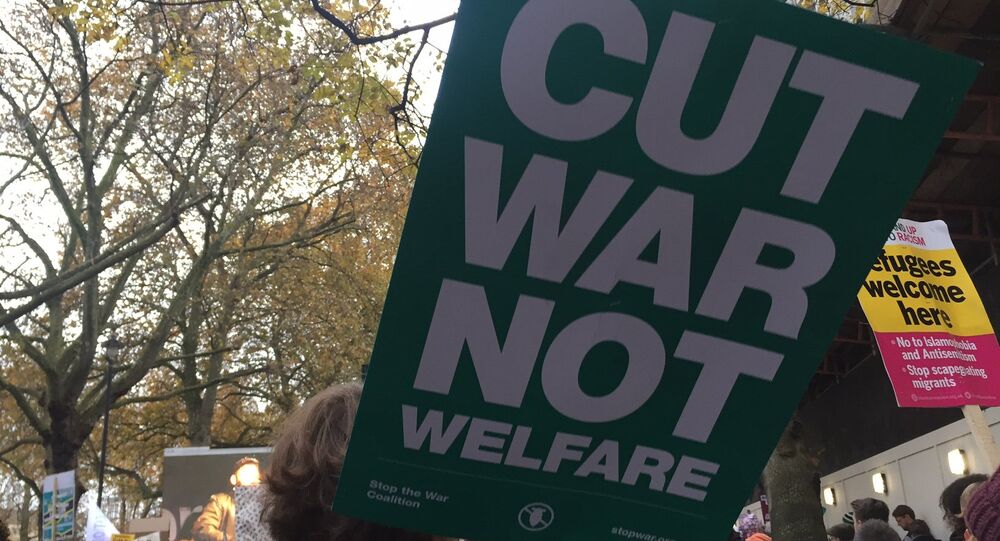 UK Students and Teachers Rise Up to Protest, Then Party, in London

Students and teachers joined together November 19 to march through central London to protest national education system measures imposed by the UK government. In a day of demonstration that closed with a party atmosphere, the message of collective defiance directed at decision makers in Parliament couldn't have been more clear.

The National Union of Students (NUS) were the main organizers of the United for Education protest and they told news reporters that they were demonstrating because they feel that the UK Conservatives are "waging a war" on students and their education.

Students displayed placards with slogans such as "Unity is our Strength" and "Cut War, Not Welfare" as a reference to wide austerity measures imposed on working people as well as students across the UK.

"We will keep on fighting against all the hypocrisy and inequality imposed on us by those we have elected to work in our interests. As a student studying at university to give myself a good future, I am being forced to get more and more into debt and there is no fairness in that at all. To add to the injustice, our government seems to find the money for war and conflict so easily, but cannot look after the needs of its own citizens in the UK," one demonstrator told Sputnik.

"I'm here to show my distrust in our UK government, who clearly do not have our interests at heart, but instead are serving their own greed! Education is a right and not a privilege, which is what we are being told!" said another protester taking part in the march from Park Lane in London all the way to Parliament Square.

In addition to the issue of debt and escalating fees that students across the UK already face, this month the government has made clear plans for amendments to the controversial higher education and research bill. The bill is said to encourage a controversial ranking system for universities that will allow the best-performing institutions to raise their fees even further.

"In every way we seem to be heading down the same road as the US; i.e, towards a competitive privatization model where education providers will be forced to compete like businesses to survive. With budget cuts also imposed on many universities and colleges already, even the staff are being affected. So what is the solution? Maybe our education system will get funded from the likes of McDonald's or Starbucks one day!" a young student told Sputnik.

"It very much feels like our collective concerns are being ignored and this is why we must all come together against the injustice of it all. In fact, I am here not only as a teacher, but I am here as a law-abiding UK citizen protesting against a long list of unfair aspects of the unfair systems imposed on us all. We have had enough of being treated like we do not matter, and if we all come together in our masses maybe we will force our government to listen!" she told Sputnik.

A list of prominent speakers and student community representatives took to a stage placed just outside Parliament Square to address the hundreds of people who had gathered in demonstration.

A spokesperson from the US division of Black Lives Matter was one of the special guest speakers. She discussed what she described as "a wider battle people in the United States are now facing" in reference to the nationwide unrest following election of Donald Trump as president of the country.

"It is our collective struggle that is uniting us. The struggle of me not being able to go to college because I was too poor living on the south side of Chicago. And it is the same struggle that the ruling classes use to divide us all wherever we are based," she told the audience.

#BLM activist from US at the #Nov19 demonstration in London https://t.co/ppqA2LyCIk pic.twitter.com/fHXFdWUoUo

"This is class warfare to divide us and to keep capitalism as the ruling system," she added.

The demonstration closed with some final words from President of the National Union of Students Malia Bouattia.

With the day of protests closed, and a vast array of left-wing groups also in attendance promoting a number of further demonstrations scheduled over the coming months in the UK, the indication is that this is one of many public displays of disdain to be held in the country.

Announcements followed about the crowds moving on to one of many after-parties scheduled to take place later in the evening. A complete day of party and protest combined…